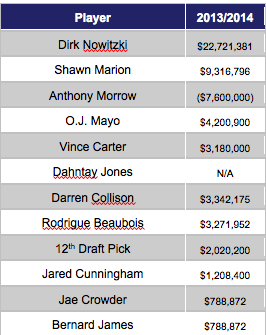 Summary: For the second straight season, the Mavericks have set themselves up to be big players on the Free Agent Market. There are a lot of extenuating circumstances, but the Mavericks could decline Darren Collison and Rodrigue Beaubois' qualifying options to open up about $7 million more dollars of cap space. I think this is almost a given. The team could also possibly convince Shawn Marion to terminate his guaranteed $9 million to take more guaranteed money over more years. I don't know how likely that would be. OJ Mayo has also had a big year and will most likely opt out of his player option for $4.2 million and become a free agent. But Dallas is certainly looking to sign a guy like Dwight Howard or Al Jefferson this offseason and can easily clear enough cap space to do so.

Free Agents/ Cap Holds: Elton Brand ($19.1 million), Chris Kaman ($9.1 million), Anthony Morrow ($7.6 million), Brandan Wright ($1.3 million), Mike James ($884 k). Anthony Morrow could be a cheaper replacement for OJ Mayo, in case he commands too much money this offseason. All other free agents could probably come back to Dallas on cheap deals, especially as role players if the Mavericks can land a top-flight free agent.

Player Options: Shawn Marion has an early termination option on his deal. OJ Mayo has a player option that he will almost certainly decline to enter free agency.

Jazz Free Agent Signings: The Mavericks can be players for any of the Jazz's main free agents. Paul Millsap makes less sense for them since they have Nowitzki, but the Mavericks might still have interest in Al Jefferson. They were the other team that tried to trade for him when Minnesota made him available.

Jazz Trade or Salary Dump Options: I could see the Mavericks dumping some of their contracts in order to be bigger players in the free agent market. Perhaps the Jazz could take Shawn Marion and a future pick or asset. Marion would almost certainly agree to a decent buyout in order to join a contender afterward. And if Beaubois still interests the Jazz... 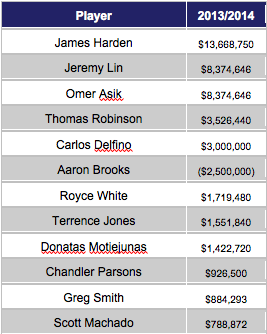 Summary: The Rockets have a roster full of reasonably priced contracts and with no huge extensions coming up, will have some wiggle room for the foreseeable future. The thing about the Rockets is that they have something more valuable than cap space, which is cap space and tradeable assets.

Free Agents/ Cap Holds: James Anderson has a $884 k cap hold, so no significant ones. The Rockets also have unguaranteed money in Carlos Delfino's $3,000,000 and Greg Smith's $884 k, and Chandler Parsons' $926 k. The Rockets will also have a team option on newly signed Aaron Brooks next season.

Jazz Free Agent Signings: The Rockets could clear enough cap space to offer either Al Jefferson or Paul Millsap, competitive offers. I could see the Rockets being interested in either one, especially Millsap. Although the Rockets' interest in Millsap may be much less, now that they have traded for Thomas Robinson.

Jazz Trade or Salary Dump Options: The Rockets don't have any bad contracts they will need to dump, but there are a handful of scenarios where they could lure one of our free agents and send a younger player back with a smaller contract. Like I mentioned, that scenario is probably less likely now that the Rockets have acquired Robinson. 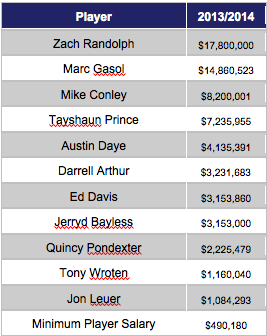 Summary: While the Grizzlies probably won't be major players in the free agent market, with nothing more than a mid level exception and other exceptions to use, they also won't be a team in very much financial duress in future seasons, looking to dump contracts. It's hard to understand what a brilliant trade they pulled off, dumping Rudy Gay's silly contract unless you look at their books, but if they can improve, or at least not get worse, without Rudy Gay, that trade is one of the best of the last several seasons.

Amnesty Candidates: Mike Conley and Zach Randolph. While I don't think Memphis will use the amnesty clause on either of these guys, it wouldn't completely surprise me to see them waive Zach Randolph. It would give the Grizzlies about $10 million in free agency to use, if they believed newly acquired Ed Davis could fill in for Randolph.

Free Agents/ Cap Holds: Austin Daye ($7.3 million), Tony Allen ($6.3 million), Dexter Pittman ($1.2 million), Jon Leuer ($1.1 million). It will be interesting to see if the Grizzlies can find a way to afford re-signing Tony Allen, who is a big help to their top-level defense. I imagine that none of the other free agents return.

Player Options: Jerryd Bayless has a player option for $3.1 million. I think he'd be silly to not pick up that option, but I wouldn't be terribly surprised if he opted out and joined free agency.

Jazz Free Agent Signings: If Memphis uses the amnesty clause on Randolph, they could probably afford Paul Millsap to replace him. Or if the Grizzlies want to replace Tony Allen with Randy Foye for the Mid-Level Exception, he'd be a possibility. But most likely, Mempis is not destination for our free agents, according to Chris Broussard.

Jazz Trade or Salary Dump Options: Probably not much here, but a sign and trade of Paul Millsap to Memphis for Zach Randolph and an asset, might make some sense for both teams, as long as Millsap was willing to go and start for Memphis at around $10 million per season. I know that John Hollinger loves Paul Millsap. 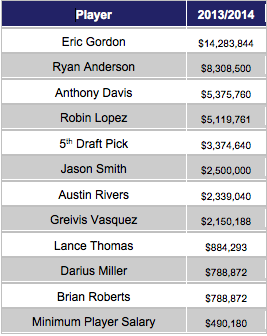 Summary: The Hornets should be decently big players on the free agent market, with very little money tied up the next 2 or 3 seasons. Vasquez and Davis will need big contracts in the future, but the Hornets have options and a lot of money they can clear easily. And now they have an owner willing to spend in the future.

Free Agents/ Cap Holds: Al Farouq Aminu ($9.7 million), Xavier Henry ($8.0 million). The Hornets could bring either of these guys back, but at significantly cheaper contracts than their holds suggest.

Jazz Free Agent Signings: The Hornets are one team, that I think Al Jefferson makes more sense for than Paul Millsap. The Hornets could clear enough cap space to make good offers to any of our free agents.

Jazz Trade or Salary Dump Options: The Hornets have no need to dump salary and the Jazz may have already missed their chance to trade for Ryan Anderson, who might be unavailable now. Depending on Eric Gordon and the Hornet's level of mutual disinterest in each other, he might be available in a sign and trade for Jefferson plus an asset. Nothing seems like a great fit with the Hornets trade wise, however. 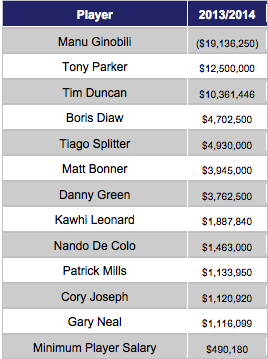 Summary: The Spurs will have some cap room, but will also have Manu Ginobili as a free agent. I'm guessing that the Spurs will work out a team-friendly deal with Ginobili, like they did with Duncan that allows this core to compete for a few more titles, while not being too expensive. Ginobili will still take up most of that cap room, realistically though. It will be interesting to see if the Spurs can afford restricted free agent Tiago Splitter on top of that, though.

Free Agents/ Cap Holds: Manu Ginobili ($19.1 million), Stephen Jackson ($15.1 million), Tiago Splitter ($9.9millino), Dejuan Blair ($2.0 million), Gary Neal ($1.1 million). I'd be shocked if Ginobili didn't work out a deal to stay. Splitter is probably 50/50 to be back next season depending on his offers on the market. Spurs will bring Neal back at a good deal and Blair will most likely leave in free agency for a bigger opportunity.

Jazz Free Agent Signings: The Spurs could take a look at guys like Randy Foye and Mo Williams for mid-level money, but probably not much more than that. Foye would shoot about 50% from three point land for the Spurs, probably.

Jazz Trade and Salary Dump Options: The Spurs have no pressing needs to dump salary, but both teams could visit sign and trade scenarios involving Tiago Splitter and one of the Jazz bigs, if they both desired.