Share All sharing options for: Guard Travis Leslie reported to have been called up from NBA Developmental League to Utah Jazz, Raja Bell's camp claims ignorance

Okay ladies and gentlemen -- the Utah Jazz have 15 people on their roster right now. We all KNOW this because it's been a huge deal all off-season then preseason, and then now season long. Raja Bell has played zero minutes for us in 2012-2013, but is determined to get all $3,480,000 of his contract salary. (I would too) There has been no buyout reported as of yet. I don't think the Jazz would get rid of anyone else, though -- not veteran point guards Jamaal Tinsley or Earl Watson, and most likely they wouldn't give up on rookie Kevin Murphy after only a few months either.

Why would they have to get rid of anyone though? Probably because there are multiple reports (including firsthand) that indicate that we are on the precipice of adding Travis Leslie to the Jazz. 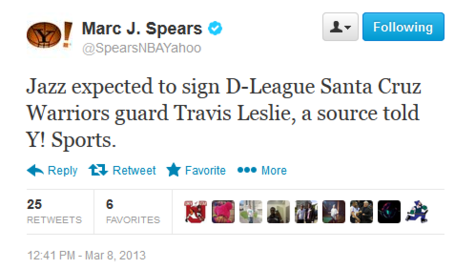 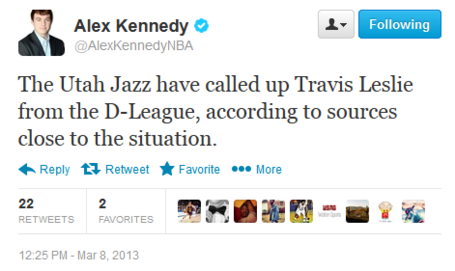 Those two are pretty big fishes in the NBA Breaking news department. Furthermore, the main man for the NBA DL had this to tweet as well:

And well, Travis Leslie himself just added this: 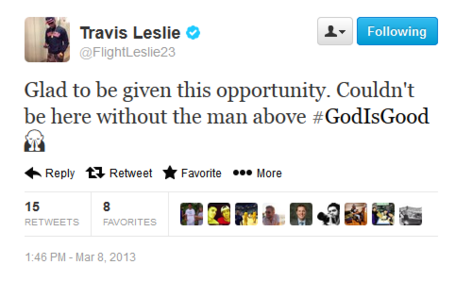 He has been RTing people all day congratulating him, so that's kind of the smoking gun.

So this pretty much means we have to get rid of someone. I think it pretty much HAS to be Raja Bell, however . . . superstar Jazz beat writer Jody Genessy had this to add to the discussion:

I guess this will be resolved soon enough though.

But beyond the minutiae of this most Jazz fans are asking not who we have to give up in order to get Leslie, but who are we getting IN Leslie. I got ya covered . . . 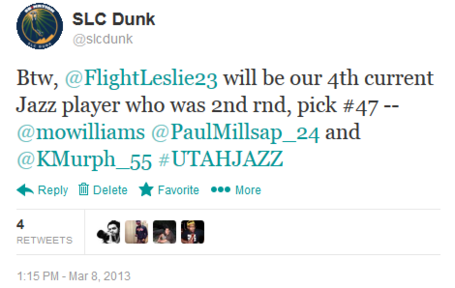 Leslie in the NBA:

Travis WAS drafted at the #47 spot by the Los Angeles Clippers back in 2011 (our Enes Kanter / Alec Burks draft -- guys drafted around his spot were Jon Leuer, Darius Morris, Malcolm Lee, Charles Jenkins, Josh Harrellson, Andrew Goudelock, Keith Benson, Josh Selby, and Lavoy Allen). (Of course, everyone was drafted ahead of the Sacramento Kings point guard Isaiah Thomas .. who is awesome) Leslie's rookie season had him playing on a Clippers team that also had Mo Williams and Randy Foye on it -- long with current Jazz hearthrob Eric Bledsoe. He only played in 10 games, for 45 total minutes. HOWEVER, we know all about young players not getting a chance to do anything in their rookie years.

That Clippers team made it to the second round, how much playing time was he GOING to get when they had guys like Chauncey Billups and Nick Young playing out of position all season long? He was not part of their long-term plans, which right now are actually short term goals of winning a title right NOW. He was waived by the Clippers on October 30th.

He killed it and was named the MVP of that game with 19 points, 7 rebounds, and 1 assist. He recently (as in 10 days ago) almost had a triple double. Watch that here:

Yeah, so he's a much more well-rounded player than we're used to getting from the NBA-DL. And we've had a few in recent years:

We also picked up the undrafted Wesley Matthews as a rookie, and snatched up DeMarre Carroll after the Denver Nuggets cut him. Our team has a good scouting department (that's partly why I'm upset we don't actually play the guys we scout as much as they probably could). I think Leslie, as a wing, helps our team immediately because he will hustle and push our guys. DeMarre Carroll, Alec Burks, Kevin Murphy, and even guys like Jamaal and Earl all know there are so many minutes left at the guard spots after Randy Foye and Gordon Hayward have their first takes.

Leslie is exciting, and is a hard worker. He'll make us better, even if that means as a practice player who will let some vets rest as we go into our playoff push. If he gets a chance to play I think he could help this team out -- I just don't know where he gets minutes right now. And as of right now, I still don't know who the Jazz are cutting.

All that said, welcome to the Utah Jazz @FlightLeslie23 !