Man, logic states I shouldn't be worried; however, every night something crazy happens. 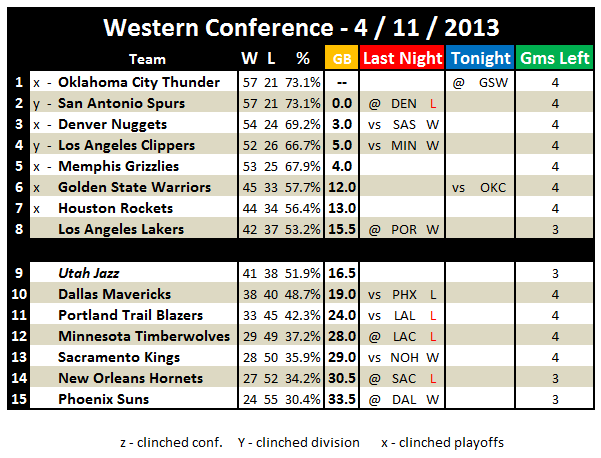 There are just two games on tonight, and only one Western Conference Game. WE have the Golden State Warriors hosting the Thunder. I guess we want the Thunder to win because we'd love it for Golden State to drop to #7 in the standings (currently at #6, and 1.0 games ahead of the Houston Rockets), because we on their 1st round draft pick. If we miss the playoffs, and tonight's standings are THEE standings we'd get a #14 and a #19 draft pick. I think it would be easier to move up (and I understand moving up would me no chance to get Myck Kabongo with our 2nd first rounder) if it was the #14 and #18 pick than than the #16 and #20 pick (which it easily could be if we make the playoffs and Golden State does well while the East messes up on their side of the bracket). Of course, some people think there's no appreciable difference and that the playoff experience will be good for us. I'm sure it will be. I'm just thinking that this year is dunzo, and this core is dunzo. I don't see the value of (if I was a chef on a boat) decorating the cake I was working on after our boat has hit an ice berg and is going down. Trying to coax a benefit out of this season and this core is like trying to finish decorating a cake on a sinking ship. Good job, good effort. But instead: save yourself and hope that the next boat your own has a better captain / navigator / engine. Some of our vets are doing precisely that right now, and would only continue to do more of it in the playoffs as their last audition before signing elsewhere.