Lakers Kobe Bryant is willing his team to victory, has gone to FT line 115 times in last 10 games

Share All sharing options for: Lakers Kobe Bryant is willing his team to victory, has gone to FT line 115 times in last 10 games

You can't really say much against the Los Angeles Lakers superstar guard Kobe Bryant. I would be what you could classify as a "Kobe-Hater" in some respects; primarily in that I think that Earvin Magic Johnson was better. But sue me, I grew up partly in LA during the Showtime era. I have my biases, and we all do.

But still, The Lakers are right up in this, and are really close to locking up the last playoff spot in the Western Conference. A lot of the credit for that goes to Kobe. He's been doing everything for his club, and almost playing every minute available. I watched Karl Malone and John Stockton hit the entire team up on their shoulders and will their team to victory at very mature ages. Kobe is doing that right now as well, and I am forced to take my "hata" hat off, and flat out respect what Bryant has done.

One of the things he's done is help his team get easy shots. And what's the easiest shot? The one where you're not allowed to be defended when you shoot: a free throw. Look at how many free throws Kobe's forced the refs into awarding him over the last 10 games. And by a direct comparison let's look at the Utah Jazz, who at times have played with little intensity (Dallas game), effort (Denver game), or passion (OKC game). 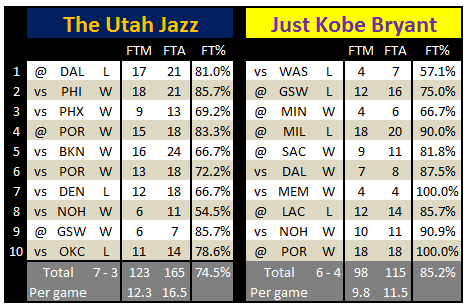 Last game we were just all too happy to chuck up jumpers and not go inside. And the team only went to the line 14 times -- a home. If we want to pass the Lakers in the standings we're going to have to show some of the heart and effort that Kobe is showing right now. It all can't just be superstar calls and acting, right? I do honestly think that part of it is that, but I do have to admit that I haven't loved the effort or gameplan our team has gone out with in the last few games. The Alfense and MOLO can't work all the time, and we know it hasn't. Get some pick and rolls, get to the rim, and get to the line. Be aggressive.

Do it like how Jerry Sloan would have wanted us to do it. And yes, respect Kobe. He is getting it done right now.