Okay Utah Jazz fans, this was really boring grunt work, but it will pay off in the end after this season is finished and we have a much nicer, round number instead of n = 176. Furthermore, this whole thing with Tyrone Corbin, I suspect, may also pay off in the end. We're close to seeing him reach the halfway point. It may happen early next season, but we're getting close to having Tyrone Corbin go .500 -- which is remarkable after his 8-20 start as a head coach. Check it out: 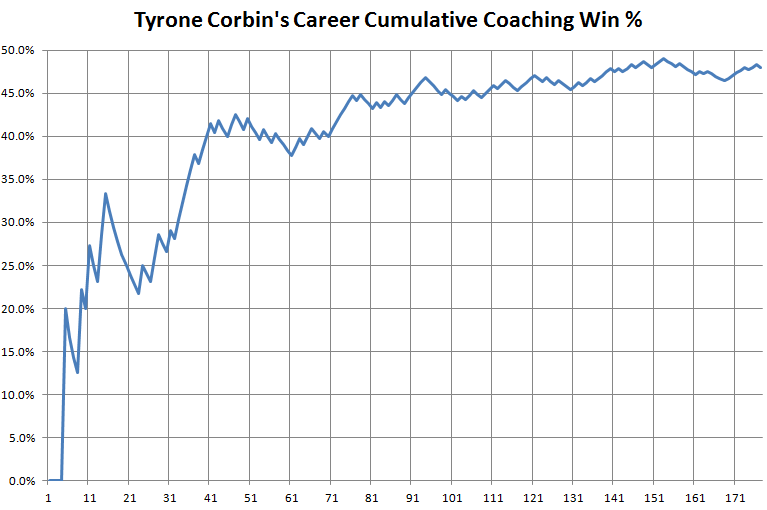 N.B. This data includes his playoff coaching wins and losses as well, because they count; and if I was doing this for Jerry Sloan I would have done the same. I'm not babying Ty, and that shows my respect for him.

Keep it up. I've never heard of any member of the Utah Jazz so universally heralded and propped up by the media guys. We were allowed to be critical of Jerry Sloan, Karl Malone, Andrei Kirilenko, and so on. Not Ty. I hope that he one day grows into the universal adoration our front office and media team has unconditionally given him.

He's growing for sure. And that's good to see. After all, it's only been almost 200 games: abbreviated pre-seasons, lock out seasons, training camps, and yadda yadda yadda. I get it. Other coaches have been put in similar situations before as well. I want the grass to be greenest in Utah, because our grass should actually be green, not because we say the grass in other cities is brown. (Individual self-accountability / feedback / and consequences)