I know that you've already seen this already, but it's worth noting that Karl Malone is a much larger human being than Danica Patrick. 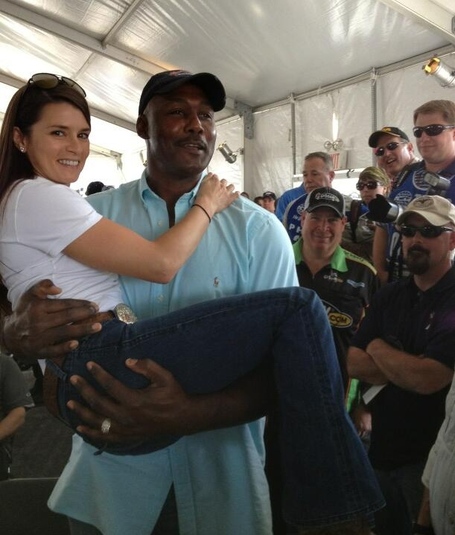 For the rest of everything awesome in Utah Jazz land, please re-visit Moni's blog.

Remember last game where Al scored 40, had a double double, and dished out 6 assists? It was a pretty amazing night for him. The whole 40 / 10 / 5 thing is kind of rare, the last guy to do it in the NBA was Kevin Durant. Of course, it's been done before in Jazzland as well. (Complete list from 1986 onwards from BBallRef here)

There are two key things to take away from this. Karl Malone brought more than just the 40/10/5 when he was doing these, where as the other two fellers only got the points/rebounds/assists and had nothing to spare on defense. And the second is that Al Jefferson did his 40 pts off of going 19/27 from the field -- not the highest FG% of this group during these 9 games for sure -- but he did it while only taking 2 FTA. So it's a testament to his game that he was able to do this without going to the line. Of course, if he went to the line more, maybe he'd have MORE 40 point games.

Bravo to Al for being in the same category as a multiple time All-Star in Booz, and a HOFer in Mail. Of course, if you want to take the wind out of our sails a bit, Big Al did this against Greg Stiemsma and Chris Johnson. Boozer did his against Yao Ming, Chuck Hayes, and Juwan Howard. And Karl did his against: Caldwell Jones, Maurice Lucas, Kevin Garnett . . . uh . . . and a lot of scrubs. Okay, Karl didn't have to kill it against All-Stars on the other side of the court, but he did do it 7 times.

Oh my goodness, Dave at Blazers Edge did a great post charting free throws and the Jazz and the Lakers. Check it out here. It is really good. Dave looks at the season averages for both teams, and the new averages for the last 10 games. And the averages he looks at are the individual FTA, margin, the %PTS from FT, and the ratios between FTA/FGA. The research is fantastic, and the analysis is spot on. Even their comments sections had really great input and analysis as well.

Our own Steve Luhm (of the SL Tribune) has been making a note of all the times Kobe Bryant was going to the line, and how few times we were getting at the stripe. I did so as well. But looking at the Lakers team as a whole, who shot 50 FTA last game, is very telling.

What does the data tell us? Well, it tells us that in addition to the Lakers getting more FTA than normal, and being way above league average, a league average FT getting club like the Jazz has been reduced to 29th or 30th on the different FTA metrics. Is this a product of our play style changing? Is this a product of refs feeling like we deserve less FTs? Or something else entirely . . .

I'm in the middle of gathering the data on players and coaches in relation to games, minutes, fouls, technical fouls, flagrant fouls, and ejections. To be honest, it's really boring work. But the reason why I'm doing it is because I'm trying to see if there are any relationships between getting a T, and also being a notable personality and/or getting a response from the ref. We believe that Jerry Sloan would earn a tech, but with the benefit of having the refs smarten up and call the game more fairly.

I think, and this is a thought -- not supported by any data, that as a young couch finding his way Tyrone Corbin is at a disadvantage. He's actually one of the most T'd up coaches in the NBA. (In Andy's Off-beat from February he was #3 in the league) Right now he sits at 4th, but he's one tech away from being tied for second. I think Ty gets techs, but the refs do not adjust how they call the game. He's not getting the value for his money when it comes to the Sloan use of a technical foul. However, I think with more experience Head Coaches CAN use this tactic to their advantage. We all know that Jerry, Gregg Popovich, and even the dastardly Phil Jackson all used to do this.

What about for players? Some of the guys we know for techs are nutcases, like DeMarcus Cousins (who also is one of the league leaders in getting ejected, AND flagrant fouls). However, some guys are stars who pick up techs like Kobe Bryant and LeBron James. Here we see that intensity isn't uniformly rewarded either. You have to be a star to get the benefit of it. (Like Kevin Garnett -- who is even allowed to do crazy things and have them not even be called as techincals)

I'd love it for our coach and players to play with more fire on the court. But I think that as Ty's predicament demonstrates, this would probably bite us in the butt. No ref is going to start giving Al Jefferson or Paul Millsap more FTA if they pick up a tech. Mo Williams may have some pull with the refs for being a vet and former All-Star; but he's not really the target audience for jawing with the ref. Derrick Favors, Alec Burks, and Gordon Hayward usually are quiet on the court, and never try to escalate things. (Though Burks and Favors have been known to do it, like what they did to J.J. Barea, or that time Favors body slammed Dirk Nowitzki) Enes Kanter? The most Malone-like of our young guys? I guess he'll have to be the guy who'll be known for being a little dirtier than the rest. And that's fine, because out of all the guys his game seems to translate the easiest to that style of play / demeanor on the court. He's gotten into it with DeMarcus Cousins and got Cousins ejected. He's gotten into it with Josh McRoberts, and got double techs. Kanter seems like that outwardly, extrinsically motivated dude. And his intensity could pay off in this way.

We'd like Favors to have more of a dog in him, but he collects enough fouls as it is.

Oh, by the way, Jerry Sloan has a career (player and head coach) 413 technical fouls.

I don't think any of us realistically expected him not to return. That said, with him returning -- it doesn't mean he can't EARN the right to be fired mid-season. I doubt the Jazz would do that though. But I think this is a new, strange NBA that we're now fans of. Stranger things can and have happened. All of that is just speculative though. I think that we've seen that Ty has the capability of improving, even if it is at a slow rate. We've also seen him coax genius out of misfortune. When he can't lean on his vets he does end up doing a variety of things. Some of it is bound to work, by the odds; and in games it has at times. Is this pure chance, or an indicator of overt, or covert, skill? I don't really know just yet. But I do know that we are seeing some evidence that Corbin is improving as a coach, and not getting worse.

. . . the more they'll stay the same. This is the downer point. Our team doesn't like to make drastic changes. We believe that next year will be that "next year" that finally comes and the team is handed over to a mixed group of some veterans and a new found focus on our youth and development. We have cap space, but we're going to bring back 2-3 of our own free agents and then add some more veterans. I don't believe that we're going to be handing the keys over to the kids. We're going to continue being a conservative team that doesn't take chances. We're not going to blow capspace on someone bad. But, we can't be assured of actual upgrades. On the market -- who is a better big right now than Al Jefferson that the Jazz can get? And is Al Jefferson right now an upgrade over Enes Kanter or Derrick Favors? If both answers are yes (and for the Jazz -- they very well may be) then we'll re-sign Big Al and start him again.

That's kind of what our team will do. If they do something different I will be more than happy to report on that and announce my mistake. After all, I expected the Jazz to bring back Josh Howard this year, and said so. But they did not, and I owned up to my mistake. I'm okay with being wrong about the Jazz when they surprise me by making smart off-season moves.

Is it getting drafty in here?

Yes, yes it is. In the next few weeks we'll be doing more and more NBA draft prep. Every day more and more players officially enter their names, and declare. Here's the list so far:

I'm going to go into it in more detail later on tonight -- so hold tight.

Aaaaannnd, that's about it for this Syncopation. Nothing to crazy in this one. Sorry guys.