This is very well looking like my last downbeat of the Jazz's season.

Share All sharing options for: No Thanks to You, San Antonio - The Downbeat #1017

Al Jefferson literally carried the team on his back on Friday to beat the Timberwolves. Okay, he didn't literally carry them, but I am sure some announcer somewhere said that. But he was awesome. I was surprised that 40 points matched a career high for Big Al. I would have guessed his career high was more than 40. Forty points, 13 rebounds, and 6 assists. The 5 turnovers are waaay too much though. Just kidding about the turnovers.

As much as we get after Big Al for not getting to the free throw line, it was pretty incredible that he was able to score 40 points while only taking 2 free throws. He made so many shots, 19 of them. Shot after shot after shot after shot. It was awesome. I like to try to put performances in historical perspective sometimes, so here is a list of NBA players who have scored 40 points in a game while taking 2 or less free throws and no three pointers:

Pretty good company. And that game where Hakeem Olajuwon shot 40 shots makes me smile. What a black hole, Olajuwon must have been that game.

As for the playoff push...

With San Antonio's loss last night in LA, the Jazz must now win their last two games to even have a chance at making the playoffs. That includes beating a Memphis team in Tennessee that will more than likely have nothing to play for on Wednesday regarding the playoffs. Memphis is tied with the Clippers and a game back of the Nuggets, but loses the tiebreak to either team. If the Clippers beat Portland at home tonight AND Denver beats Milwaukee on the road, the Memphis game will mean nothing to the Grizzlies. 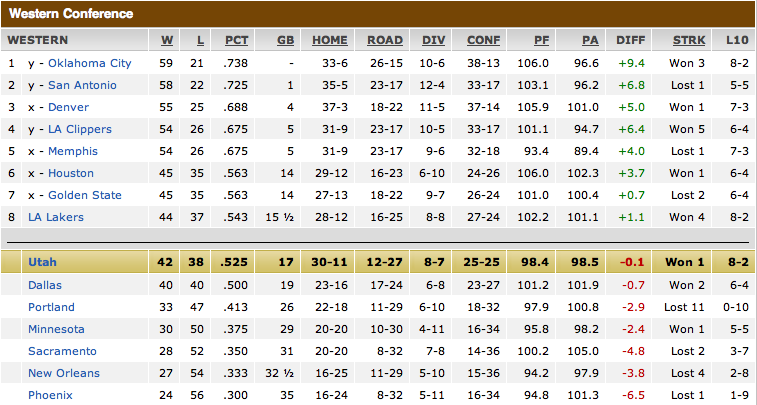 Still, none of this matters at all if the Lakers beat Houston in LA on Wednesday, leaving Jazz fans and writers to lament every single loss that might not have been. The Jazz-Memphis and Hou-LA games are part of a back to back ESPN doubleheader on Wednesday, so it would be pretty cool, and very dramatic, if the Jazz would at least win out, causing the Lakers to know they HAD to win. So many MUST WINS coming up. The Media will be so delighted.

I don't want to dwell on the topic, because it feels like people are pretty much set in their thinking on Coach Corbin, but I want to make a couple points and then ask a question about the rumors of Corbin's definite return next season. I think it is more likely that Tyrone Corbin is an average coach than a great one. And although I could make a laundry list of things I think Corbin could improve on, you can't deny that the front office has put him in a tough situation with an unbalanced roster. In short, I think Coach Corbin deserves a chance with a new roster to show what he can do with different guys. I think he deserves to finish out his contract.

My question for people that can't stand Tyrone Corbin is the same one I asked Diana on Twitter:

Please let me know in the comments.

Utah Jazz Athletic trainer needs our help. This is a worthy cause.

I'm a huge Trey Burke fan. But I am also fairly realistic, I think. So I am resigning myself to the fact that the Jazz will not have the ability to draft him. I like CJ McCollum and if have been wondering, as of late, if McCollum's age (he's a senior) might help him contribute more quickly to an NBA team. The Jazz might find the idea of drafting one or two seniors intriguing for that reason, especially if they go with a bit of a youth movement next year.

With all of that said, here is my most ideal, yet realistic lineup for next year.

That roster costs the Jazz about $55 million next season.