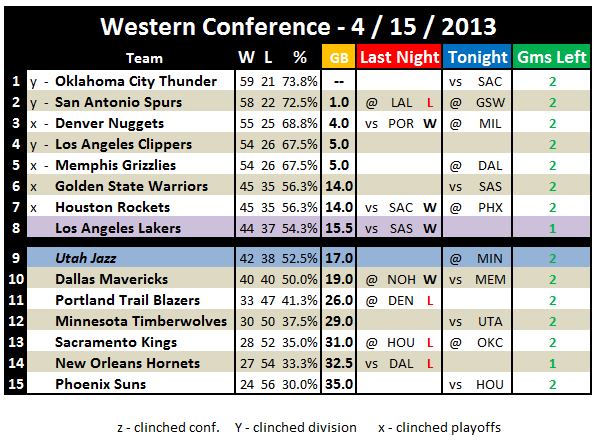 Tonight is another heavy night for our conference, with 11 of 15 teams going at it. The Thunder take on the Kings and try to secure the number one seed in the West and homecourt in the playoffs until the Finals. The Spurs will fight back and take on the Warriors. Gotta be pulling for a Spurs win here, but likely that they just rest their dudes. The Denver Nuggets will take on the Milwaukee Bucks on the road -- schedule didn't give them any help, but they are likely to finish #3 in the West this year. (Just like the old gypsy woman said!)

The Grizzlies will host the Mavericks; a must win there for MEM so they can have the higher seed* than the Clippers. The Rockets will play against the Phoenix Suns who are in super tank mode right now.

Am I forgetting anything? Oh, no. Wait! Yes, yes I am. The Jazz will play the Minnesota Timberwolves tonight in a must win game.