The Media and the Jazz Edition- The Downbeat #1026

One week into the Jazz offseason, lets talk about what's happening!

Share All sharing options for: The Media and the Jazz Edition- The Downbeat #1026

It has been a week since the season ended. It seems like its been a lifetime. I don't know how I survived the offseason before twitter and SLC Dunk, then again before our online Jazz world our offseason was shorter. I do love that thanks to the internet the offseason moves so quickly and there really is no offseason. There is always something to talk about and there is always some news minus the doldrums of August. So it feels like there hasn't been a game in years but we're also lucky that we've been able to talk about the Jazz all week long.

Jody reported on it on last Friday:

For the fifth-straight year, the Jazz organization will send a squad of youngsters and NBA hopefuls to the Orlando Pro Summer League, General Manager Dennis Lindsey confirmed.

Dates haven't been announced, but that summer event will take place in early July at the Amway Center's practice court.

Jazz rookie Kevin Murphy and late-season pickup Jerel McNeal are among the likely invitees, and it wouldn't be surprising if Enes Kanter made an appearance while rehabbing from his left shoulder injury.

Moni wrote a fantabulous article this week. It has received quite a bit of attention on twitter and other Jazz related sites.

Moni writes about three narratives that have been circulating as truth in the Jazz media.

1. "Every Jazz player during locker room clean out was complimentary of the job Tyrone Corbin did managing the team and rotations, which shows what a great job Ty did."

2. "Paul Millsap was disengaged, out of it, upset over his role, filled with regret over turning down the extension, etc. and it was obvious all season long."

3. "Paul Millsap’s locker cleanout comments were super revealing and in direct contrast to everyone else’s comments."

I agreed with everything Moni wrote in her response to these narratives (surprise, surprise)

Jay ( @j32jam on twitter) wrote a great comment on Moni's blog. Jay is a long time season ticket holder who has invested years of time and money into the Jazz:

All year long the people on Twitter and on certain Blogs have been vilified for being negative. I have a question: If the truth is negative why not report it that way? When lots of money is involved and season tickets to be sold we get reports like "We need to get better’" or "We working on hard on getting better" and were told what a great job Ty Corbin did this year "under the circumstances." For definition of circumstances read article above. I have been a Jazz fan since 1979 and I know what "Jazz basketball" is and the chaos that we have right now is not "Jazz basketball" I mean really? 8 free agents? no one to build the team around? no direction for the future? All we know is that we have lots of cap room and we are going to spend it wisely. Dennis Lindsey had better have a plan for this team and it’s future or the Jazz will end up losing a lot more of their fan base. There are educated knowledgeable and basketball savvy fans here in Utah and being told that we have never played at that level so we don’t know is wrong. Paul George was in the same draft class as Gordon Hayward and he was on the All Star team this year and was just named MIP in the league. Not one Jazz player, with all the good young talent we have, was even given one vote for MIP. Enes Kanter, Derrick Favors and Gordon Hayward were all drafted higher then Paul George. Not one vote!! Yet we as Jazz fans should be glad the progress of "the core four" has shown. The fans think that "the core four" should play more but we are told that Ty doesn’t want to lose the locker room by the media. Then by having 8 free agents on your team it produces chaos and players like Milsap get lost in the shuffle. I am glad there is Blogs out there that tell the truth and that aren’t trying to sell you something or tell you something that you just know is not the truth. The natives (meaning the fan base) is getting restless and if this team doesn’t turn it around fans are going to leave and some may never come back. Please stop insulting us with spin and look at the truth. We are not going to be patronized much longer. We want "Jazz Basketball" back.

Go Jay and Go Moni! What are your opinions on the narratives that Moni shared?

Andy Larsen had a different kind of reaction to Moni's post than Jay and I did. He took it to Twitter. And Andy did like the article just took it differently.

While I feel Andy makes a few good points. On the whole I disagree. I know that the Jazz are being treated differently by the media than they were even 5 years ago. I remember reading the paper as a teenager and just hating Gordon Monson's articles and even Steve Luhm, Tim Buckley, and Brad Rock at times. Those writers were not afraid to call out the Jazz. I was the BIGGEST Jazz homer, I never thought they could do wrong when I was young. I thought they were perfect. I already shared a few weeks ago about my conversation with Lou when we were first married, ( him suggesting the Jazz didn't do everything to try to win a championship). I was even worse as a teenager than how I was in my young 20's.

I had a hard time reading their articles (more Monson than the others but everyone at times) because they were critical of the Jazz, of Larry's lack of spending money, of Jerry's rotations or timeouts, of Karl's missed free throws, of Stockton's passiveness in taking shots etc. Those are some pretty big names to be calling out. Does no one else remember Malone's fights with the media? Now that is not allowed. Now on a whole the media choose not to be critical of the Jazz and heaven forbid of Ty.

I believe this is one of the biggest factors in why the fans mistrust some of the media. Fans believe they are not getting a fair objective viewpoint from the media. When we are fed that Burks will never be better than Foye, that we can't win games without Al, or agree with Brooks when he said that Ty gave the Jazz just as good of chance to win ball games as Phil Jackson would have, my heck how are we suppose to trust other things they say?

I didn't like reading what I read in the 90's at times but I respected their writing, and deep down I knew that most of the time they wrote the truth. Also who remembers mad Hot Rod. Hot Rod was not afraid to share his opinons when the Jazz were playing poorly.

Last Friday, Gordon Monson was on the morning show with PK. They had a wonderful conversation. They talked about how they were so tired of fans calling out other fans for being negative. (It went right a long with Jay's comment on Moni's blog. It also validates what I am sharing today.) They said how its ok to be critical of the team, and its ridiculous to call fans out for being critical, and that critical fans are some of the best fans. They related it to their shows and to writing also. I don't believe in being negative or critical just to be negative and critical but lets face it the Jazz have been a frustrating, less than perfect team the last few years.

Scott Garrad the program director of the Zone responded to Andy's tweet. Its good/interesting a member of the media's perspective on the subject.

I believe Scott when he says he hasn't been told what to say the six years he has worked for the Zone. I also think however these guys aren't good to kill the mouth that feeds. I don't think they write an outline of ok say this and say that but I do believe that the Jazz of course have control over their media whether it be online, radio or print. The Jazz are a multi- million dollar business, they aren't going to let the image they have built for the last 30 years be ruined. They of course are going to be very aware of what is being said. Greg himself told me as much. He knows what is said on twitter and the blogs. Why wouldn't he care what was said on the radio station he owns, of course he would. Again I am not saying they are handed a transcript of what to read but of course there is an influence directly or indirectly from the Jazz organization. 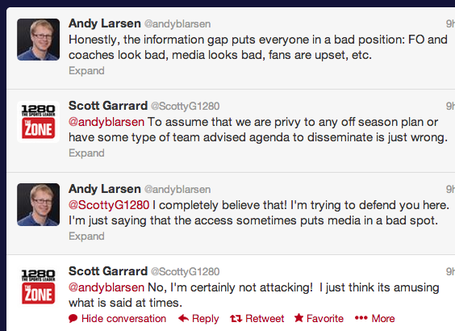 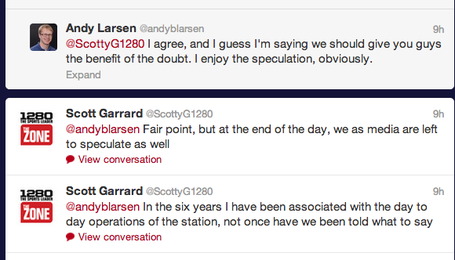 Its almost summer, summers mean vacations. Unless you want to go on a vacation with the Jazz, then you go in February. Here's a fun video I hadn't seen about this past years Jazz Beach Bash. I love Cancun. I went when I was 20, it was tons of fun. Seeing this video makes me want to go back soon!

If you could go on vacation with a current Jazz player, which player would it be and where would you want to go?

If you could go on vacation with any player in Jazz history who would it be and where would you go?