Downbeat #1011 - Dr. Strangeyear, or: how I learned to stop worrying and love the playoffs

Get your Jazz Playoff tickets while you still can.

Share All sharing options for: Downbeat #1011 - Dr. Strangeyear, or: how I learned to stop worrying and love the playoffs

I'll be the first to admit that I was surprised by the win last night in Oakland. I think that it is the biggest win of the season up to this point given all of the circumstances. It is only the third win of the season on the road against a winning basketball team, and the first since December 18th. If I were Sportscenter, I would point out all of the things that have happened in the world since that last win, for dramatic effect. But I'm not Sportscenter.

The great thing about last night was the positive contributions from so many Jazz men. Mo Williams was Harvey Dent, commander of justice and right, instead of his alter ego. He really played a very good game. Al Jefferson dominated for stretches of the game and had an overall positive impact on helping the Jazz win. Derrick Favors had moments of greatness on both ends of the floor. Gordon hit threes and dished assists. Millsap was a +13 while on the floor. Tyrone Corbin made smart adjustments and forced the Warriors to make moves to match us at times.

And on top of all of that, it put us back in 8th place and the Lakers back where they belong. Oh, and this:

About 5 weeks ago I slipped a poll question into my downbeat that asked if you wanted the Jazz to make the playoffs. I was relieved to see about 75% of the poll answers were in the affirmative. I think there has been some discussion among Jazz fans on this site and on twitter, etc that maybe it would be best for the Jazz to miss the playoffs this season. While it's certainly understandable if you feel this way, I would just like to discuss why the playoffs are a good thing this year.

For those of you who do want the Jazz to miss the playoffs, I see two reasons given:

1. It will improve our draft pick

2. It will lead to the firing of Tyrone Corbin and a forced sea change within the organizations plan for a title.

First off, missing the playoffs will improve the Jazz's draft pick. It would move the Jazz from the 17th pick to the 14th pick. I do think this is significant. Some would argue that there is no difference between 14 and 17, but that just simply isn't the case. There is a chance that the players available at 17 will be no worse than the players taken 2-4 spots higher. But it could also be the difference between drafting Mo Harkless or Royce White. Kawhi Leonard or Chris Singleton. Larry Sanders or Luke Babbitt. It could matter very much. But is drafting 3 spots higher more important than the things that come with making the playoffs? You know what they are, since we have hashed them out for a year now.

Secondly, I have a hard time believing that the front office, and especially Dennis Lindsey, will base their off season decisions on the arbitrary difference of one or two wins (the difference between making or missing the playoffs.) Lindsey has admitted that the Jazz are far far away from contending for a title and he isn't going to base big decisions like Tyrone Corbin's future or Al Jefferson's place on the team, on whether or not we make the playoffs. At least, I don't believe he will.

Last season I was all for possibly taking a step back and missing the playoffs, but for a lot of reasons that just aren't reasons this season. So there is my simple plea to any of you still secretly, or outwardly, hoping that the Jazz miss the playoffs. I've been there. But stop worrying and learn to love the bomb instead.

I also imagine that some think missing or making the playoffs will be the difference between drafting a great point guard or a crappy one. Understandable. But I think the Jazz will have an opportunity to draft their future point guard this season, even at 17 or 19. Hear me out.

Seventeen of the current starting point guards in the NBA were drafted outside of the lottery. That includes two time MVP Steve Nash (#15) and guys like Tony Parker (28th), Ty Lawson (18th), Jeff Teague (19th), and Jrue Holiday (17th). In fact, almost every year since 2005 has had a starting caliber point guard drafted past 17th. Guys like Rajon Rondo, Kyle Lowry, George Hill, Goran Dragic, Jose Calderon, Eric Bledsoe, Greivis Vasquez, etc. We would take any of those guys to be our starting point guard.

I love Trey Burke. I think he is a winner and a tremendous basketball player. He probably won't fall to where the Jazz are drafting. But at the same time, I am not positive that a guy like CJ McCollum or Shane Larkin or BJ Young, or Myck Kabongo, won't eventually be the best point guard in this draft class.

Watching this video, I believe that CJ McCollum and Trey Burke have about 90% of the same strengths and weaknesses. I am confident in saying that the Jazz will have the opportunity to draft a future starting point guard at pick 17. They just need to be fantastic scouts and talent evaluators between now and the draft.

And if Dennis Lindsey really wants Trey Burke, he will have a really similar chance of trading up from 17 as he would from 14 to get him, I think.

On last week's podcast with Andy, I mentioned that Enes Kanter has improved offensively enough to have scored equal points per possession with Al Jefferson this season. It got me wondering what some of the points per possessions are for our Jazz men right now. Here is the list: 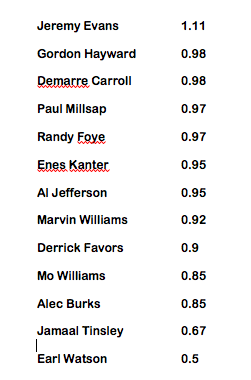 I'm genuinely intrigued by the discussions this information will produce.

So here is the deal. Let's try to guess how many wins the Jazz will end up with and if it will be enough to make the playoffs. But on top of that, I want each of you to make a personal goal to punish or reward yourself for your guess. Nothing crazy. Leave your predictions in the comment sections so I can make mental note. For instance, I believe the Jazz will finish with 44 wins and make the playoffs.

If I'm wrong, I will abstain from soda until the end of May. If I'm right, I'm buying myself a 12 pack of Dr Pepper and drinking it during Game 1 of the playoffs.

Now it's your turn.