Deron Williams changes the course of the Jazz...and of human destiny.

On June 28th, 2005 the Blazers made their 3rd largest draft day mistake in their franchise's history by trading the 3rd pick in the draft to the Utah Jazz for picks that would ultimately become Martell Webster, Linas Kleiza and Joel Freeland. For Kevin O'Connor, it was redemption for the previous 5 years of horrible draft day decision making on his part. But in one fell swoop, O'Connor drafted the Jazz's next franchise star and helped fans forget about the 5 previous drafts which yielded not one single long term starter. Between 2000 and the Deron Williams pick, the Jazz had scouted out and drafted these players:

Kaniel Dickens (not relation to Charles Dickens; I looked it up)

In that 5 year period, I don't believe there was a worse production on draft day in the league. Atlanta drafted Josh Smith and Pau Gasol in that time frame. Boston Tony Allen and Al Jefferson. Brooklyn drafted Kenyon Martin and Nenad Krstic. The Bulls drafted Kirk Hinrich and Ben Gordon. The list goes on and on. Only the Pacers rivaled the futility the Jazz demonstrated in drafting from 2000-05. And yet, in 2005, the Jazz began a 5 year stretch that would take them to dark horse contender status.

Somewhere in a parallel universe, Raul Lopez and Kirk Snyder are co-MVPs of the top basketball league and throwing alley oops to each other.

Just When I Think You Couldn't Possibly Be Any Dumber...

Going into the 2005 draft, the Jazz had a starting 5 of Keith Mcleod, Gordan Giricek, Andrei Kirilenko, Carlos Boozer and Mehmet Okur. It was obvious where the weak links in the lineup were. But because of the large amounts of money thrown at Okur and Boozer the off season previously, the Jazz had essentially no cap space to use on free agents. The Jazz and O'Connor targeted and hit on their prize and Deron Williams would eventually erase a lot of the wrong doing from previous off seasons with his stellar play during his rookie year. But shortly after the draft, Kevin O'Connor literally erased some previous wrong doings when he traded Curtis Borchardt, Raul Lopez, and Kirk Snyder in order to clear a little bit of long term money and bring back Greg Ostertag to Utah. This was all part of a 5 team, 13 player trade, which is still the largest trade in NBA history.

In September the Jazz would add free agents Devin Brown and Milt Palacio, who sort of define a typical veteran addition that Kevin O'Connor has valued over the years. Devin Brown would take a step back from his decent production in San Antonio the previous years, and Milt Palacio would become best know for his late game heroics that earned him a breakfast cereal moniker. Cap'n Crunch immediately became one of Craig Bolerjack's poorest nicknames, which is saying something. The Jazz had also added Calvin Miles Jr. and Robert Whaley on draft day. Whaley was a risk for his off the court history, but performed so well at pre draft camps that the Jazz were able to take a chance on him. He was probably best know for a Park City Bar incident unfortunately instead of adding to an already talented front court. 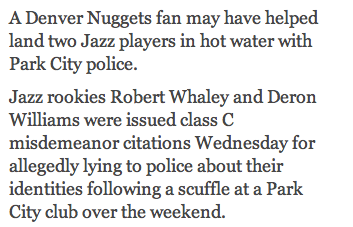 It's obvious that Kevin O'Connor wanted to see what he had in Okur and Boozer and add complimentary pieces while working in his new number 3 pick. It would be interesting to know if O'Connor envisioned bringing Deron Williams along slowly, or if that was solely Jerry Sloan's creation. By now, we should all be decently versed on the starting job that Deron was forced to earn.

The Rise of D-Will

By the end of the first game of the season, it was fairly obvious that Deron Williams was the most talented point guard on the roster. Deron opened the season with 18 points, 3 assists, and 3 rebounds while leading the Jazz to an opening night victory over the Dallas Mavericks including a 70 foot buzzer beater at the end of the 3rd quarter. To his credit, Jerry Sloan utilized Deron Williams, even if he didn't start him right away. Williams played the most minutes of any point guard 4 out of the first 5 games, while starting none of them. While Sloan did value withholding a starting nod, presumably, in order to make Deron Williams learn patience, Sloan also understood that playing Deron significant minutes was valuable in winning games. In his first 30 games of the season, Williams played almost 30 minutes per night, by far the most of any of the point guards.

Deron Williams wasn't the only Jazz man, who was benefiting from Jerry Sloan's trust. Mehmet Okur was embracing his first consistent starting spot, by averaging 18 and 9 in the first 30 games of the season. Okur was filling in for an injured Carlos Boozer, who didn't play until February 10th and Okur started all 82 games this season averaging 18 and 9, while shooting 35% from three point range.

All in all, the Jazz got only 33 games from Carlos Boozer, but still missed the playoffs by only 3 games. Deron Williams ended up averaging 28.9 minutes a game and scored 11 points while giving out 4 and a half assists. Keith McLeod started almost half of the season, while producing a PER of 8 and Milt Palacio somehow managed to shoot only 6% from behind the 3 point line. We should commemorate Palacio and McLeod for paving the way for several, terrible back up point guards that the Jazz have utilized. Where have you gone Howard Eisley?

At the end of the season "Slick Willy" as Hot Rod Hundley liked to call WIlliams, was named to the 1st team all rookie squad alongside his good friend Chris Paul. It was the first time a Jazzman had been named to either the 1st or 2nd rookie team since Andrei Kirilenko in 2001. Paul Millsap would be named to the second team all rookie list the next season.

What Can the Jazz Learn From 2005? Draft the Point Guard of the Losing Team in the NCAA Title Game

All in all 2005-06 was an uneventful season and represented the third year in a row that the Jazz missed the playoffs. But even though the Jazz again missed the postseason, it wasn't the end of the world. The Jazz home attendance would dip to a 10 year low of 92% capacity the next season, but the Jazz had put together a core of Williams, Boozer, Kirilenko and Okur that would lead the Jazz to 51 wins and the Western Conference Finals in 2007 and to the playoffs the next four years. The Jazz went from winning just 26 games to 41 games in 2005-06, the largest increase in wins in franchise history. If the Jazz had been forced to draft Raymond Felton, or start Keith McLeod all of 2005 with Martell Webster coming off the bench, there is almost a guarantee that the Jazz would not have been as successful. In 2005, the Jazz desperately needed a point guard of the future and went out and got him.

Eight years later, the Jazz sit in the same predicament, needing a point guard to add to their talented group. And while it would probably take draft lottery luck to help them get a top flight point guard, I can't shake the feeling that the Jazz will have a Deron Williams type player on this roster, in the next two to three years. I don't know if the Jazz will draft him, sign him, or develop him, but the Jazz find themselves at the end of their three year lull of just bordering the playoff cutoff and if history repeats itself, they'll find themselves jumping up a tier or two in the upcoming seasons.

This concludes the 3 part review of the Jazz seasons between 2003-06. For part 1 of the series click here and for part two click here.