Clark is on a beach somewhere, so Andy takes over this Monday's Downbeat.

The Jazz brought in 6 players this Saturday for an extremely early pre-draft workout. This is actually a pretty creative move, as I can't remember another team starting workouts this early, before the Chicago Draft Combine. There's not a database of team workouts through history, but I can conclusively say that this is the first workout in the NBA this season.

There's been some great coverage on the workout around the internet. First is this super convenient table by Amar, in his Downbeat on Saturday. He's obviously excited by the fact that Myck Kabongo was here.

One note on the draft workout that I (and others) weren't a big fan of: 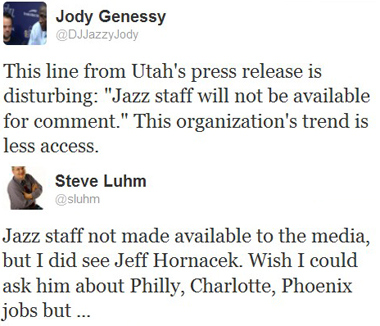 That the Jazz are giving less access to player, staff, and coaches hurts the fan experience significantly. Jazz fans are famous around the league for their passion about their team, and that includes relative minutia like NBA draft workouts. It would have been interesting to hear from the staff about how these workouts were ran, and some veiled opinions of the players, but unfortunately the PR team for the Jazz chose to not allow those standard interviews.

As Jody notes, this is part of a disturbing trend. The Jazz also decided to prevent, for the most part, any one-on-one interviews with the players last season, those have instead been replaced with wildly-less-interesting scrums in which all of the media stands around one player at a time. Media, and therefore fans, get to know the players less. Fewer and less interesting questions are asked due to the constraints. The same problem applies for last season's ban on interviews with assistant coaching staff members.

The other result: a sense of distrust of the organization from fans, who infer from these decisions that the Jazz "have something to hide." We've seen the result of this distrust on Twitter, national websites (like ESPN's Grantland), blogs (especially this one), and even some would say in the box office, where attendance numbers were down greatly this year.

As a fan, these restrictions seem silly and counterproductive. However, I fully recognize that there's likely another side to the story. The point of this beat, then, is to hopefully elicit a response. For example, I'd love to hear from Randy Rigby on this issue in his weekly interview, or from Jonathan Rinehart (Jazz PR director) on the reasons for the trend.

With the season over, and very little in Jazzland to talk about, I've been working on a new project that should bring more informative stats and analysis to you all. You see, perhaps the hardest part of any statistical study is the data acquisition step: getting, then formatting the data you wish to perform experiments on turns out to be really time-consuming and difficult. Indeed, I lamented this problem over on the APBRmetrics forums a few weeks ago. Not helping is the trend of those publishing their statistics getting hired by NBA teams, who then make the data private.

But, there is a lot of good data out there, especially unformatted data. Both ESPN and NBA.com record a play-by-play of every single game in the league and keep it on their websites for approximately forever. User kpascual, at the aforementioned APBRmetrics forums, has developed and maintained a web scraper tool to actually download these statistics and put it into a database. This allows us to track events on a play-by-play basis, rather than on a game-by-game basis like with most boxscore-based analysis. Even better, it's open source. If you're nerdy like me and want to play along, check out the files and associated README file.

So, what kind of questions can we answer with this database?

So let's do an example. I chose this, essentially, because it was the easiest to calculate. The question: Who shot the most 22 foot jumpers in the league? 22 feet is right inside the arc, about the longest 2-point shot you can take. Analysts usually decry long twos as being woefully inefficient. The list:

Of all players, Damian Lillard took the most of these shots, taking 46. Steph Curry was second, but then Jazz player Gordon Hayward comes in third, taking 34 of these shots during the season. Below the top 3 are some excellent shooters and some infamous chuckers, as well as Jazz players Marvin Williams and Randy Foye. The Jazz actually have more players in the top 20 than any other team. The Jazz weren't ridiculously unsuccessful on these 79 tries (going 31-79), but a step back behind the three-point line would have likely given the Jazz a few more points over the course of the season.

While it may just be an issue of sample size (22 feet is unnecessarily restrictive), this one list may give us a few lessons. That Gordon Hayward is so high on the list, ahead of people like Beasley and Bryant, indicates that he probably needs to tone down his shooting from this range in favor of higher percentage shots. Secondly, given Foye and Williams' place on the list, the Jazz offense could probably be slightly more efficient by instructing its players to take a step back. It's not a huge thing, but is a possible item of improvement.

Grant Harrison, the Jazz' game operations/promotions manager, has retired this offseason, as we discovered Saturday in this cool article by the DNews' Brad Rock. In short, he was the man who made The Bear: discovered him, hired him, and gave him the freedom to do his crazy-Bear antics. Thank you so much, Grant, for your contributions to Jazz fandom.

My question to the world: now that we'll have a new game operations manager, what would you like to see out of the timeout and in-game entertainment staff? Any great ideas for making Jazz games more fun? Anything you've seen at other sporting events or the like that you think the Jazz could do as well? Let us know in the comments, the Jazz are listening.