Okay, this day was amazing. This is like fantasy camp for super fans. I cannot stress strongly enough how lucky and honored we feel to have been a part of it. On the drive home in classic Chicago traffic we agreed that if we learned NOTHING on Friday, this trip would be worth it for all of the amazing things we saw / experienced / participated in, and learned today. I've watched the Pre-Draft camp on TV every year it's been on. I have tons of MBs of scouting data on the draft. I have endless numbers. If I had just stayed at home, watched this on TV, read the interviews other guys had with these players, and read other people write about what they saw . . . . I just asked Mychal. We can't put a percentage value of how much better being in person is. Being super fans at home is like 7% of what we just experienced. My only regret is that it was only MyLo and I here. We really need like four to six people covering this event. It's such a *small* event in the 365 day schedule of an NBA Year; but, it is really two days that are super saturated with things you will never see any other day of the NBA year.

I have watched, scouted, and followed the Chicago NBA Draft Combine for years. I thought I knew what we were getting into. After the lack of prep time we had after even GETTING to Chicago, I went to bed with the confidence that "Hey, I have seen this on TV so many times, I know what this is. And it's going to be fine."

I did not expect to be blown away.

I was absolutely blown away.

There was no problem at all. Which was rewarding. The weather was good. The location was bad. And we did have a great parking spot (which we prob didn't deserve, and prob should have picked to move from . . . but it was a logical impasse when we were talking with the gym boss). We were the 2nd "Media" pass dudes to get there, but we still didn't get there first. But we got there early enough to get acclimated. 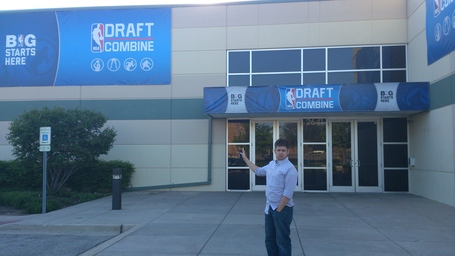 Here is Mychal showing us all where we are.

We got in there and after a short while hooked up with NBA PR guy Michael Perrelli -- who gave us our media passes. 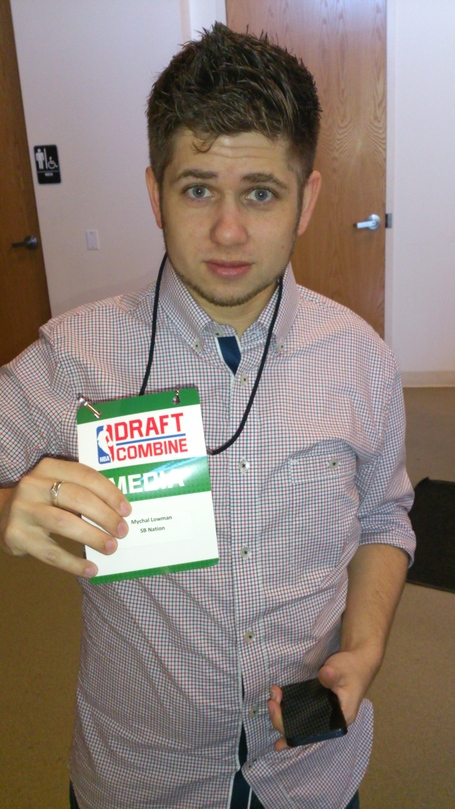 Here's Mychal showing us our media passes, mine is the exact same but with a different dude's name on it.

It was pretty cool to meet real NBA PR people, and see a ton of really tall non-draft picks walk around, but the biggest thing you see at first is the beautiful facility. 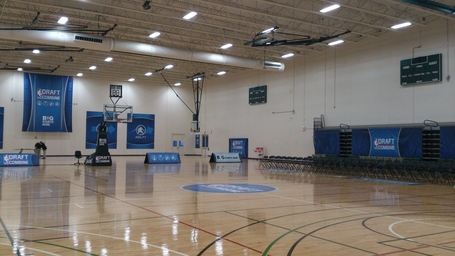 It's pretty amazing. I had only previously seen this in video games

And some pretty amazing people. 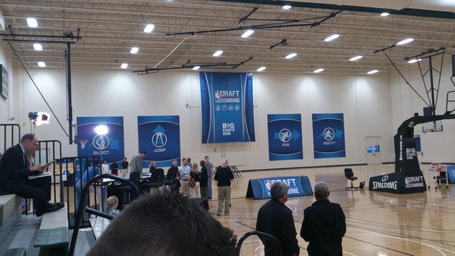 The always amazing Chad Ford on the left side.

We didn't get to prep before. We had never been in media scrums before. And we had never done anything like this. It was our first time.

"If you are going to pop your cherry, you better go big." - Mychal, right now

We were a little green. Unsure. But we found someone to ease us into it all. We waited for the right time and we walked up to Chad Ford up there, and we had a very cool talk with him. He was super nice, shook our hands, and wished us all the best. And he did this with the clock ticking on him before he had to go on TV. I think if we didn't do that we would be wrecks. He was like our "media dad" out there, and made us feel like we could do this.

For reals, it was a pep talk. We felt like we could do *it*, whatever it was.

After a little while, we got a chance to prove it.

Getting in our Groove:

Mychal and I got a chance to network with other people there. We first tried to find other people at our level, but as the day went on, we knew we belonged at this. And other people felt so as well. We were talking to former NBA players, HOFers, coaches, media stars, front offices, and other associated NBA people. Heck, even the President of the NBA Coaches Association came up to US to ask us what our deal was, and chat about good old 80s basketball.

The networking happened all day long, but the real reason we were here was for the players. It was about watching basketball. Understanding basketball better. And finding out what we should be looking for. And the 63 guys who were there helped us get in our groove.

MyLo was the 'face' guy who did the heavy lifting with the player interviews in the media availability. I was the guy who had the trusty excel print out and sharp eye on the guys we had pre-selected to focus on. MyLo killed it in the media room, and by the end of the day had individual interviews with some of the biggest people on our lists. I was figuring things out on the court, and a lot of people kept trying to sneak looks at my spreadsheet -- heck, Walt Perrin (VP of Player Personnel) was reading it at one point when I left it on a chair. (We were sitting right behind the Jazz contingent)

Getting down to business:

This whole thing is nuts. You have guys like Scott Layden, Mind Sanders, Popeye Jones, Roy Rogers (etc) running all the drills and yelling at these kids who have never done these drills before -- and they HAVE TO get it within 20 seconds or so, or they are screwing themselves and their chances to make the league.

You have all the scouts and people in the rafters.

You have all the Team VIPs sitting one row in front of us, and you get to see EVERY-THING. You are close enough to hear their jokes, close enough to notice who they are looking at on the court, and close enough to see the most random, never-in-my-life-would-i-expect camaraderie amongst all the front offices in this league. Some guy from the Philly's delegation came over and pulled Kevin O'Connor's ear and they had a big laugh about it.

These are guys in their element, in their fraternity, acting like there are no cameras. All the guys meeting and greeting each other, this is the true NBA. And we got a chance to see a little glimpse of all of it today.

The biggest delegation was the Utah Jazz delegation: 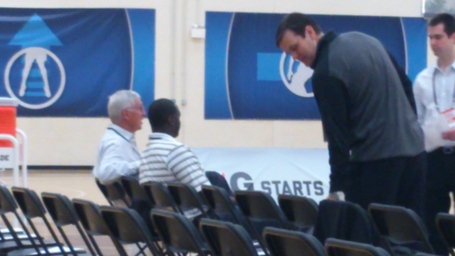 Our contingent was the largest and a lot of other teams built their group around ours. Philly (including ex Philly GM Billy King, etc) attached themselves to KOC's flank. Other guys from the coaching spectrum pulled chairs to sit by Jerry (Jerry initially sat on the last seat but people changed the seating to be by him). The Boston Celtics (Danny Ainge), Houston Rockets (Daryl Morey) was behind the Jazz too. As were the Toronto Raptors (Bryan Colangelo). The Lakers were on the other side, and just doing nothing because they have no 1st round picks.

Having a lot of guys there made it hard NOT to keep watching them, instead of the players.

There were supposed to be 63 guys in this, but a number of them did not even bother to play: Seth Curry, Gorgui Deng, Jamaal Franklin, Ryan Kelly, C.J. Leslie, and Dennis Schroeder. There were some huge surprises with what we saw -- but we're going to go into that in the NEXT post. And there were some big surprises.

Mylo: (Paraphrasing by me) It's all about the quality of the players. Even the worst guys here, the guys who will have trouble getting drafted or staying in the NBA-DL, these guys are so skilled. It's difficult to imagine that the people we call scrubs are just so good at basketball. The first group we saw today were the Small Forwards, and they were so fast, and running so hard down the court.

Amar: (adding) The shooting guards, the last guys to shoot -- the guys who warmed up hours ago -- these guys were still making all of their shots. And they had taken about 100 shots already today. They were so competitive, and so good. There was separation there because of one guy, but you could tell that all these guys were here for a reason. And that reason was that they are really, really good at basketball.

My biggest thing was meeting all of these people that I've seen all my life. I got to talk with Jerry Sloan and Tyrone Corbin. I had a brief encounter with HOF Bob Lanier. We were just walking around and got a one on one interview (SLC Dunk being one person) with Shareef Abdur-Rahim. I met the lady who gives draftees their hats after their names are called by David Stern was my favorite person I met today.

Mylo: Yeah, that was insane. If you see one of these guys on the street, they are going to avoid you and look at you funny. We got candid responses.

Mylo: Yeah. And you appreciate that.