NBA Draft Lottery -- Everything you need to know in one place

Share All sharing options for: NBA Draft Lottery -- Everything you need to know in one place

Tonight is the NBA Draft Lottery for the NBA Draft 2013. It will be televised (no need to send anyone there) on ESPN at 6:30 pm Utah Time (8:30 PM EST). The Draft Lotto has been around for 28 years and there's some very interesting stuff that we can look into if you are a really terrifying nerd like I am. For example, the #5 "seed" for the lotto has been 5x more successful in winning the lotto than the #4 seed over the last three decades (This was edited to better reflect the English language, and how I don't know it yet). That's not the way the probabilities are supposed to work, but that's how the ping pong balls have bounced over the nearly three decades of this event.

So, let's go over the lotto.

The Historical Results of the NBA Draft Lotto:

Here is every team who has "won" the lotto, their record that season, their probability to win, the number of teams they jumped to get there -- and the player they selected.

Essentially the team that WINS the lotto usually has a winning percentage in their 30%, and jumps 3.25 spots to get there. That kind of sucks because the #1 and #2 seeds have only won the lotto 8 times in 28 years -- despite having the best chances to win it. 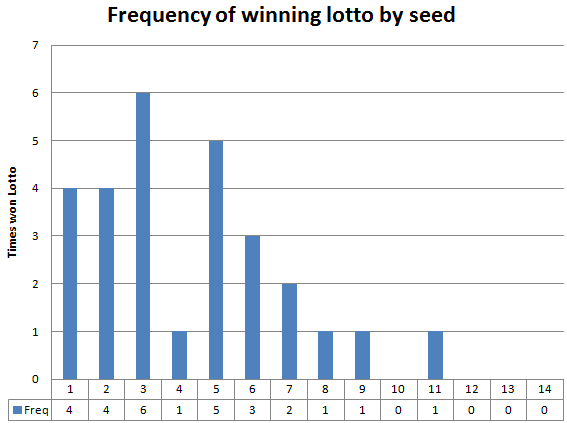 Yikes! The probabilities don't seem to give a damn about reality, and vice versa. Probably the biggest "upset" was the Orlando Magic winning the lotto two years in a row -- the second time they only had a 1.5% chance to win it. That's just random enough to make it seem like it truly is random and not that a young expansion team in a big tourist destination didn't just draft an epoch changing bigman and still missed the playoffs.

Of note are that the #10, #12, #13, and #14 seeds have never won the lotto. And that's fine. We've only had 28 different lotteries. Not every team is likely to win it in such a small sample size. That said, there are 14 lotto teams, and 28 years -- so if you like round numbers, if everything was even each "seed" could have won it twice already. Of course, that's grade school track and field day math, and not actual probabilities. Some teams are just luckier (Cleveland), and some seeds have been shafted (#4 seed).

But those are the fates.

This is how the probabilities shake down for this season

While it looks bad for the low teams (the teams that aren't good enough to make the playoffs, and aren't lucky enough to lose the RIGHT amount of games (Like an oreo cookie, if you don't have enough milk you can't win the lotto or the playoffs) The #14 seed (the Jazz) only have a 0.5% chance to win the lotto, but we don't care about that. We have a 1.9% chance to be Top 3 -- which would happen for the second time in three seasons for us. Is that likely to happen? Not likely. The probability is only 1.9% for us -- but this is the same system (The NBA Draft) where the Magic won the lotto two years in a row, the second time they only had a 1.5% chance of doing so.