The Enes, Dennis and Moni Edition- The Downbeat #1049

Ens is out until August. Moni had a birthday. Very little draft talk.

Share All sharing options for: The Enes, Dennis and Moni Edition- The Downbeat #1049

Enes's agent reported yesterday that Enes could be out until August, so we will not see him at the Orlando Summer League.

The Jazz have not released a timeline on Kanter's recovery, but have monitored Kanter closely as he rehabs in Chicago. Ergul said head trainer Gary Briggs has made three trips to Chicago, and that Kanter met with team doctors and GM Dennis Lindsey last week when the contingent was in the Windy City for the NBA's predraft combine.

Ergul described the Jazz as "very happy and very satisfied with the medical staff."

I will miss watching Enes this summer. I miss Enes's tweets.

Karl Malone is not just famous in Utah, he is famous all around the world.

Apparently they were talking about famous people in school and her teacher talked about Karl Malone. I love that she learned about Karl in school haha.

Karl of course is still very famous in his home state of Louisiana. (H/T Moni)

* ps I have no idea who Frank Foster is

We all know how the lottery worked out. The Jazz stayed put: 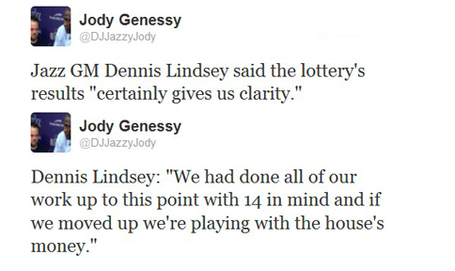 What do you think that clarity is? Or do you think he just means ok, now we know where we're picking for sure?

KOC reiterated this point in his weekly interview with the Zone: (via Moni)

So what's with the evaluation of older players. why are the Jazz so into vetzz and older players? Is it because its who Ty is comfortable with? Are we ever going to have young hot shots on the team again ;)

Damian Lillard, NBA Rookie of the Year, is in the news but surprisingly not for something good. The Deseret News reported that two of Damian Lillard's bodyguards beat up to fans who took a picture of Lillard.

The fight allegedly occurred after Jermaine Uinwa snapped a photo of Lillard with his cellphone in Portland’s Old Town district at around 2:30 a.m. on May 18.

"I took a picture and Damian Lillard was upset that I took his picture," Uinwa said in the report. "So when he turned around he’s like, ‘Did you just take my picture.’ "

According to the report, Lillard’s bodyguards became enraged with Uinwa who offered to apologize for the picture before a brawl erupted. Uinwa’s brother, Phil, suffered injuries that required stitches on his lip and a broken nose.

Lillard did not hit any fans. Police have said that Lillard is not a suspect in this case. It however does not look good. Nothing good happens when you're just hanging out at 2:30 in the morning.

Yesterday was Moni's birthday! AK wished her a Happy Birthday! 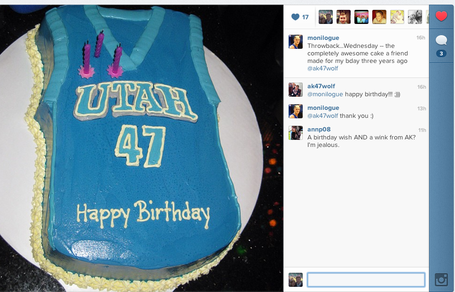 If you could give Moni a birthday gift what would you give her?