The Mailman Edition -The Downbeat #1054

Karl Malone returns to the Jazz!

Share All sharing options for: The Mailman Edition -The Downbeat #1054

Everyone knows but it has to be mentioned in the Downbeat. Karl Anthony Malone is now officially reunited with the Utah Jazz. Its hard to believe that just over a year ago this was going on:

http://www.celebritynetworth.com/video/feud-brewing-between-malone-jazz-owner-517263592/ (watch this video it is a great video but I can't embed it because its not from youtube)

Moni has you covered on all the drama that existed in the past between Karl Malone and Greg Miller (the Jazz last year especially) (Please go back and read Moni's entire post, seriously we (the Jazz) were so messed up last year, its amazing the drama that went on)

In a surprise, The Mailman announced that he's accepted a part-time job to help coach the Jazz big men.

"We as a Jazz organization have got a great stable of big guys," the Hall of Fame power forward said Wednesday on the team's radio station during an interview with CEO Greg Miller. "I'm excited."

"I think your involvement with our bigs," Miller replied, "is going to help us win more ball games."

This girl could not be more excited about Karl Malone returning to the Utah Jazz. I found out via twitter. I was at my daughter's piano playing class. it was suppose to be an hour long class but it went 1 1/2 hours. I am grateful @jazzmanjoey linked me to a tweet. so I could follow the news on twitter since I was unable to listen to it live on 1280. I don't think I have been this excited about news from the Jazz in years! I tweeted that last night I felt like running out into the street and shouting Karl Malone is back, Karl Malone is back with the Jazz! 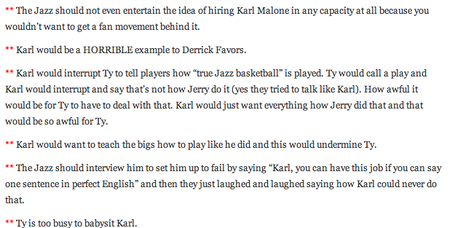 I imagine those hosts will change their tune. I honestly don't believe that they believed all that they said. Just like fans on twitter who have been very very very vocal against Karl the last few years and yesterday they showed great excitement about Karl's return. I am sure a lot of those fans were just saying those things about Karl to support Greg which is fine but I am just glad we can all love Karl again officially with the Jazz not just us crazy reckless boggers who never stopped loving Karl.

I think Karl will help our young bigs a lot. Karl is the best at having a workout regimen, he ran the floor better than any other big in NBA history, he is the 2nd leading scorer in NBA history, he played incredible defense for someone who didn't really block shots, he ran the pick and roll like no other. (And he is able to teach it, I remember a segment on TNT where they had Karl teaching the pick and roll and different options you can run out of it, he was articulate, he was focused, he explained it better than I had ever heard before) Karl loves the Jazz and is loyal, the Jazz are his family, he will share that with Kanter and Favors along with his knowledge of the game.

Kay Malone was very active on twitter supporting Karl's new position with the Jazz. This is the best discussion I have ever read on twitter: 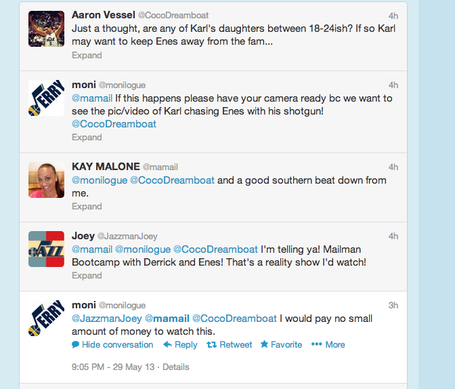 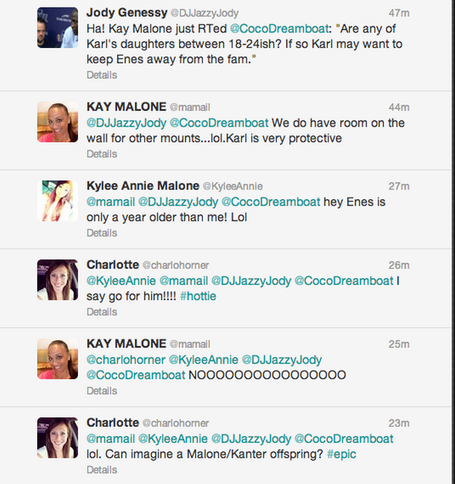 Karl has coached in the NBA before and he did a fabulous job!

Tuesday Jeff Hornacek had his press conference as the newly appointed head coach of the Phoenix Suns (I actually started to type Utah Jazz) In an interview with the GM of the Suns after they hired Jeff, he had this to say about Hornacek (courtesy of Moni)

** "He is very bright. He has a good presence about him. I think he has some very natural leadership qualities, so those were my first impressions of him. Then as we sat down and talked a little more about basketball, I was able to see his feel for the game, in terms of how he thought the game, how he would be able to utilize different players on our roster. We also had him draw up a few plays on the white board and you could just see how creative he is, in the different ideas he had. …

We gave him different scenarios, one with the Utah roster and one with the Suns roster. We gave him the game time and score, and where the ball is in the situation, just to see how he thinks. He was really, really impressive in doing that."

Jeff will do a great job for the Suns. The Jazz will miss Jeff a lot. I only wish him the very best.

From the press conference we learned questions went like this:

Congrats to the Suns who have embraced online media, they have been clear leaders along with the Timberwolves in social media and blogs. If you follow the Timberwolves twitter account you'll see them tweeting out their player workouts way ahead of time including the twitter handles for the players working out for the team, they tweet pics and interviews from the workouts. One workout looked like they had 70 coaches/media there along with the players. They also spotlight fan blogs on their website, interviewing the editors/writers of the blogs. Its absolutely great. The first blog they spotlighted was Canis Hoops (our sister blog) Check out their spotlight of Canis Hoops here.

Interaction with fans is super important to the team and they will encourage management and players and coaches to speak to the media more.

Enjoy Karl thanks to @prodigyJF (memo is money)