I was strolling through Instagram when I saw this and had to do a double take! 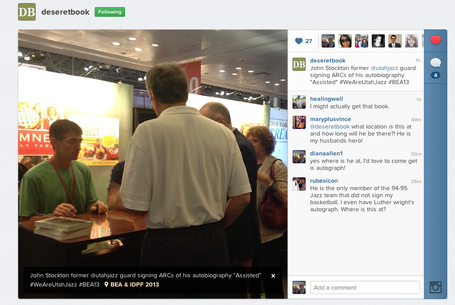 If someone would have had me guess any former Jazz player who would write an autobiography I would have guessed John Stockton dead last.

John Stockton with the help from Kenny Pickett wrote the autobiography.

The Forward is by Karl Malone!

You can pre-order the book now.

Deseret Book tweeted me saying that Stockton will be having autograph signings at Deseret Books in Utah closer to the release of his book!

Sad at first at the thought that I'll be in Boise when John Stockton is having his events in Utah, I quickly changed my attitude: 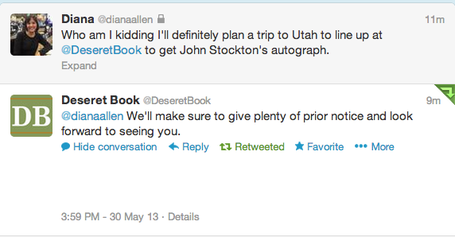 We at SLC Dunk will keep you updated as soon as we hear about any future John Stockton book signings!

I have to agree with @jazzmanjoey

This is usually a pretty dead time for Jazz fans, between the end of the season and the draft. Since the Jazz aren't as public about draft workouts, or FA plans its usually pretty quiet. Its great that our Jazz legends are keeping us busy with new Jazz news!

Comment on what you think John Stockton will share in his autobiography. I want to hear any locker room gossip for the 19 years he was with the Jazz but that's a long shot since especially back then the Jazz were so hush hush about everything. And John Stockton is too mature and professional to write such things. I imagine we won't read anything like that, I imagine its more of a strictly chronological type autobiography with motivational type thoughts and inspiration.

Here is a summary of John's book from the publisher:

John Stockton’s #12 hangs in the rafters over the Utah Jazz, yet he’s always been a private man. Now scores of fans finally have a window into the man behind jersey, and they have it in his own words. In his new autobiography, John has invited readers to learn about his life from childhood to the NBA, his work ethic and his friendships with other NBA greats, and his personal beliefs and why family is paramount in his life.