Share All sharing options for: Buyer's Remorse In Utah? - The Downbeat #1035

You may have seen the discussion on twitter already, but our SBNation sister site for the New Jersey Nets ran a post a few days ago that basically insinuated that the Jazz lost on the Deron Williams trade and that we, as Jazz fans, were just starting to realize this. I think there are certainly some errors in the way the post characterizes the trade and the players the Jazz acquired in the trade. More interestingly, to me, is the incessant need, for both franchises to have "won" that trade. To my knowledge, this is probably the first time a Nets fan has been brazen enough to declare that trade a win for them. And heaven knows, most Jazz fans feel like the Jazz "fleeced" the Nets.

In reality, both franchises got what they wanted and both could "win" on the deal. The Nets got a star to build the new team around in Brooklyn long term, and the Jazz got out from the burden of pleasing a disgruntled (to what degree, no one knows, and I think that includes the Jazz front office) star, while getting "something" for him definitely. But it feels good to have your front office take advantage of another front office. That is why this post was written on Nets Daily. And that is why Jazz fans will reaffirm their love of the trade, now that Deron has proven, he can't take a team past a beaten and bruised Bulls team.

But I agree with Basketball John on this ultimately:

And furthermore, I don't think we will be able to measure this trade for another 2 years or so. Especially not until we see what we get during the upcoming draft. Our part of the trade, still hasn't played out.

But what the post really made me think about, was all of the parallel universes the trade created. What could have happened if the Jazz didn't make this trade? What would the best and worst case scenario be? Here is my imagination of those scenarios:

One person somewhat close to the Deron situation that I have talked to, believes that the Jazz could have kept Deron around, if they had kept Deron's best friends on the team around. That would include Wesley Matthews, Kyle Korver, and Paul Millsap. It would also mean, that the Jazz would have chosen Wesley and Kyle over Al Jefferson. If that was somehow enough to move forward with, the Jazz could be looking at a roster with:

This roster would cost the Jazz about $38-40 million and they would have cap space this summer to re-sign Paul and Kyle or pursue bigger free agents. Ironically, this team's ceiling was probably only slightly higher than the real Jazz team the last two seasons. Of course that is the best case scenario. What if Deron had walked last offseason/ The 2012-13 roster would have looked like this:

Some washed up veterans on one year deals

So basically the Jazz would have Wesley Matthews and Kosta Koufos instead of Derrick and Enes and probably have a 5th to14th pick in this upcoming draft. It wouldn't have been the end of the world, but certainly not as good as what we have now. But those are my pretend realities. What would your's look like, if the Jazz had never traded Deron/ It's only hypothetical and fun; let's not get super worked up about it.

If you were asked "what is the biggest problem that needs to be fixed with the Jazz this off season?" I would hope that you would answer "defense." It needs to and I believe, will be addressed. But like last off season, I think the 3 point shooting needs a little fixing as well. 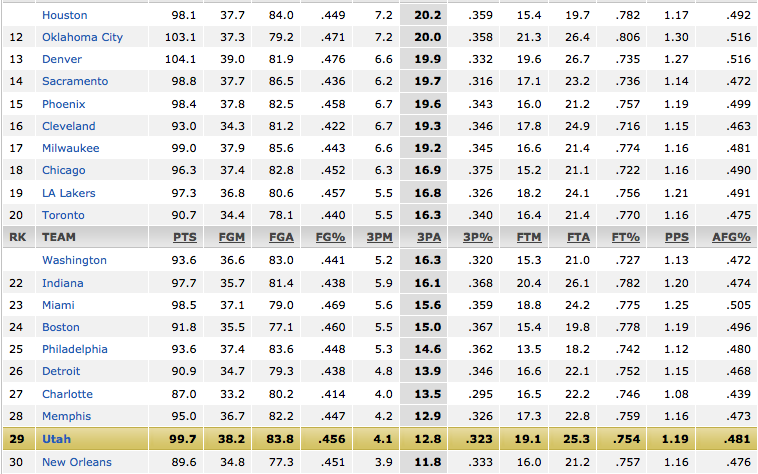 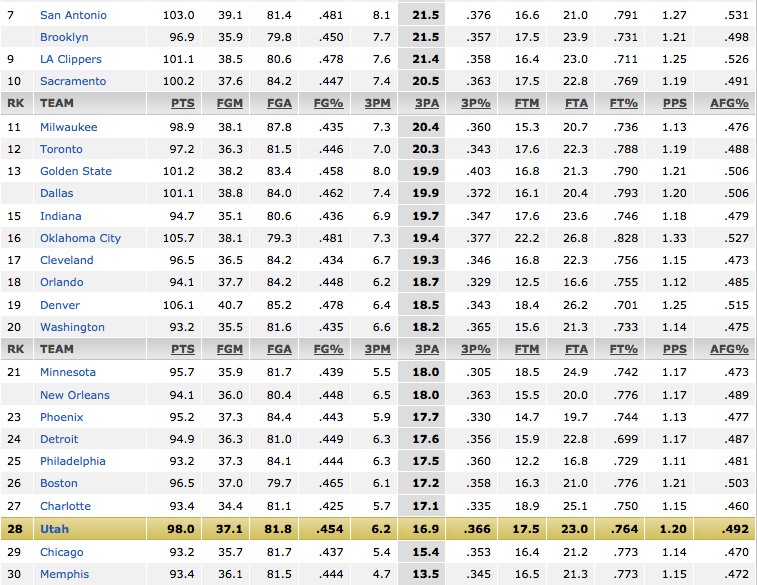 With all of that said, the Jazz should not only target accurate three point shooters this off season, but ones that aren't gun shy either. Here is a list of the most accurate 2013 free agent 3 point shooters and their attempts per game:

Here are the numbers of a free agent big men, without name or prestige. What kind of contract would you be willing to give this player? Can you guess who it is?