Your weekly Thursday Downbeat! Jumbotrons, Jerry, the Mailman and Enes!

Share All sharing options for: "The Karl the Mailman Malone and the Missionaries Edition"- The Downbeat #1038

Excellent news Jazz fans! Randy Rigby had his weekly interview on the Zone yesterday, during his interview he announced that within the next 30 days the Utah Jazz will make the very exciting announcement about a new Jumbotron! Hallelujah our prayers have been answered, we will no longer have a Lite Brite!

Way back in 1992 (I imagine some of you weren't even born back then) the Jumbotron was a HUGE deal. I came across this article (JUMBOTRON MAGNIFIES DELTA CENTER EXCITEMENT (yes the title was in all caps!) ) in the Deseret News that made me laugh and laugh.

Here are some of the highlights!

"The Jumbo really adds to the home court advantage," one fan needlessly pointed out at a recent Jazz vs. Milwaukee Bucks game. His comment, shouted in my ear over the roar of the crowd, was made during a replay of a thunderous dunk by Jazz forward Theodore "Blue" Edwards.

Ironically, the JumboTron replay of Edwards' slam drew a bigger reaction from the capacity crowd than the original "live" version. For many fans, particularly those seated higher up in the arena, the eye-level, larger-than-life Sony carries more impact than the real thing on the floor below.

During construction of the $66 millionn Delta Center, fiber optic cables were laid in a conduit under South Temple street connecting Video West with the Center. Rigby, of the Jazz, said the organization's relationship with Video West has been a long-term and very successful one.

Rigby said 10 of 27 National Basketball Association teams across the nation now have giant screen, closed circuit television scoreboards in their arenas (Mitsubishi, as well as Sony, makes them) with three more on the drawing boards.

If the Jazz are making an announcement in the next 30 days do you think the new Jumbotron will be ready for the upcoming season?

Jerry Sloan is in the news again. It seems like anytime a coaching position opens up, Jerry's name is brought up. Our local reporters Brad Rock and Steven Luhm (who actually talked to Sloan) have written about it.

I found Brad's article entertaining and interesting. Brad asks if at 71 if Jerry is too old and if the game has past him by. Brad mentions this (which is interesting to me as nearly everyone in the local media repeats the Jazz PR of Jerry being "tired"

But wouldn’t he have trouble relating to today’s players? It was friction with Deron Williams that convinced Sloan to quit back in 2011.

Moni shared that Randy Rigby mentioned it in an interview a few weeks ago when evaluating Ty for the season.

Having said that, I’ve been very pleased with the job that Tyrone Corbin is doing…I’ll tell you what, he has been, he is to me right now, done everything that we as an organization could ask Tyrone to do. Came in in a very difficult situation, and immediately said to us, "Hey, I think I can work with Deron [Williams]. Let me, you know, get with him and keep working on getting him back together."*

And he did that…Tyrone, I think, has done a remarkable job of really, with his staff, of doing the right things for the organization. Perfectly, no. None of us perfectly, but he’s also, what I’ve been impressed with, is Tyrone’s the first to recognize the faults and being, even sometimes too overcritical of himself, but learning from them and growing and developing.

* This marks the first time someone from the Jazz has acknowledged Deron Williams’ role in Jerry Sloan’s resignation, although it was clear as day on that day given the first thing Corbin did after accepting the job–even before the press conference–was take Deron to lunch. Rigby probably forgot he pinky swore he wouldn’t tell.

So finally we are getting a little honesty about Jerry's departure, things we have all known but can't know because the Jazz official's stance is that Jerry was tired.

Anyways I'd be happy for Jerry if he wanted to coach again. Steve Luhm talked to Jerry yesterday, here is what Jerry had to say about returning to coaching.

"It’s just been conversation more than anything else," he said. "I’ll explore it and see what’s going on. It’s mostly been people checking on what I’m doing, what my wishes are and how I’m thinking."

I wish Jerry could return to the Jazz but wherever Jerry goes, if he coaches again, I will be very happy for him and wishing him the best.

My_Lo and Amar have some exciting news!

Way to go and represent SLC Dunk, boys! If you have players that you are interested in who are participating in the combine, share in the comments so Mychal and Amar can check them out. 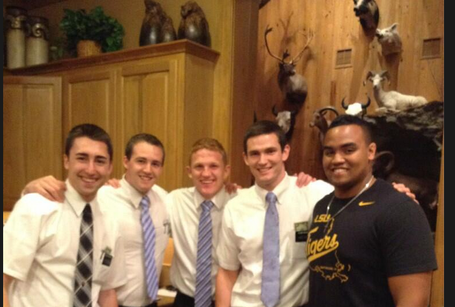 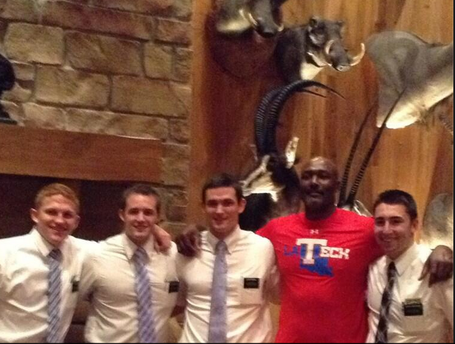 I am hoping that Karl gets a few more visitors this off season namely Derrick Favors and Enes Kanter.

Dennis Lindsey said that Favors asked to get help this summer. Dennis said they were talking with two different people who are possibilities to help out Derrick this summer but Dennis wouldn't share who these people were yet.

Who do you think the two people are that Dennis is talking with to help Favors this summer?

EDIT: My dream earlier this week!

I had a dream that through SLC Dunk we were able to get the Jazz to practice with Jerry Sloan and Karl Malone at an abandoned warehouse. The warehouse was in south Provo. We had to keep it secret from Jonathan and the "real media", KOC and Dennis Lindsey. I went to all the practices and Moni would come when she could. Moni had a secret blog to document everything. Derrick Favors told me nearly every day that Jerry Sloan was the best coach that he had ever had and that he just LOVED Karl Malone.

It was such a good dream. One that when you wake up you don't want to wake up, move, get out of bed at all because you want the dream to stay real.

Enes is so freaking talented its not even funny how much more talented he is than our starting bigs Al and Paul. No offense to Al and Paul who are fine NBA players but there is a reason Enes was picked 3rd!