The Jazz have been dropping hints about the scoreboard for a while now. We may just hear more details today.

Share All sharing options for: Scoreboard announcement for the Utah Jazz coming today?

Details about the new Jazz scoreboard have been sparse -- not surprisingly. Fans have been asking for one for several years now and talk from team officials has finally gotten serious the past year.

An announcement has been teased by Randy Rigby, President of the Utah Jazz, for a little over a month now. That announcement may finally be coming tomorrow.

Austin Horton, a producer for the Big Show on the team's flagship radio station, tweeted this out,

You won't want to miss tomorrow's Big Show. There will be a very BIG announcement made that you'll want to hear. That's all I can say.

Now, unless John Stockton is walking through those doors, I can't think of an announcement that would qualify for "BIG" status. We already know Malone is coming back. There could be a new assistant coach announcement, but outside of the aforementioned Stockton, doesn't really qualify as "BIG." The Jazz have even posted for a new position for a Graphic Design Animator that will "create all content for all arena video/LED matrix boards and monitors for the Utah Jazz, Salt Lake Bees, EnergySolutions Arena." I could be way off on this assumption, but even if I am, here's a preview of what the scoreboard might be like.

It's hard to believe that once upon a time, the current JumboTron that was installed in the then Delta Center was on the cutting edge. There were only 10 arenas in the league that had a "giant screen, closed circuit television scoreboard." This is what the current scoreboard's resolution is (blown up to about 12' X 10'):

That's it. 160 X 128 pixels. It's now nearly 21 years old. According to the lead consultant on the Jazz project Michael Rowe, "some video boards turn obsolete after five to seven years of use." Yeah, I think that's the case here.

In January, The Sports Business Journal reported that the Jazz - as well as the Suns -- signed with Anthony James Partners (AJP) to "guide them through the process for upgrading their center-hung boards."

AJP is a consulting company in the video/audio business and has worked with local teams such as Utah State in getting their new display in the Dee Glenn Smith Spectrum and BYU's recent video renovation of LaVell Edwards Stadium. They've done dozens of other implementations for college football, basketball, the NBA, and the NHL.

So, will the Jazz be getting a scoreboard similar to the behemoths recently installed in Indiana and Houston?Probably not and here's why.

I don't know what the limit is the Millers have given on a new scoreboard. The biggest priority is to enhance the fan experience. Perhaps matching that in priority is to be able to use the new scoreboard for advertising and sponsorships. This needs to make some money too, even if it takes years to recover the funds spent.

Given that this is a small-market team, I would be surprised (pleasantly) for the team to splurge on a court-length display. It's taken 21 years to replace it.

Here's a poorly-taken photo of the JumboTron from a recent concert I was at. Notice where the display is? 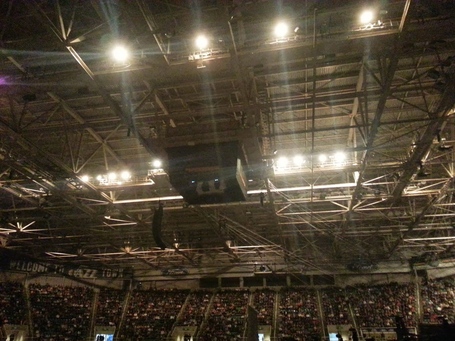 The ESA was built to house the current JumbTron. It's lifted up into place for concerts and other events when it's not needed. If you look closely to the right, there are cables and wires running down from the rafters to the stage for its own lights and monitors. If the display couldn't be moved out of the way, they couldn't have these cables here.

While I'm sure there would be a way to put a large scoreboard in place and still be able to move it out of the way, it's likely more expensive to do so. See reason #1.

With teams in the NFL, MLB, and the NBA seemingly trying to out-do one another in terms of size, Rowe is more about getting a quality scoreboard in place rather than having shear size,

"Indoors, the screens are so overpowering; instead of quality they're going for size. There's no design style, they're not really thinking about how they're being used, and that's one area that needs to be improved.

They're [the teams] building these huge units but don't understand how to use the content and that's a real struggle. There's a common sense approach that gets a bit lost when the vendors take control. We push for higher design with better-looking finishes and signs."

If you look at the portfolio on AJP's website, you'll find that's the case for the indoor scoreboards that they've done. The scoreboards for recent NBA arenas include the Trail Blazers and Bucks. Those were in 2007 and 2008 respectively. Things have changed immensely since then though.

However, a more recent project was for the Columbus Blue Jackets of the NHL. Take a look at this picture, 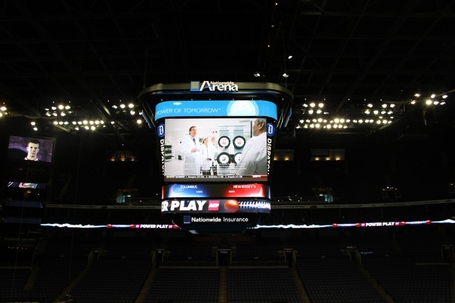 This is my guess at what the new scoreboard will look like. There's an HD upgrade with ribbons on the top and bottom for advertisements. There's also an additional LED right under the main screen for lineups, stats, etc. There's also static corner advertising. A custom one could also fit in the existing nest high in the rafters.

If you're holding out for the large scoreboard, there is a bit of hope. The incentive for the Millers would be additional revenue from the screen in advertising and sponsors. They could also attract more events that would make use of the HD display. The problem of having cables and wires in the way of a non-movable display may be a non-issue given that the concert artist or event promoter could utilize the new screen. It also wouldn't hurt in a potential bid for the NBA All-star game should the team decide to pursue that.

Also, the Jazz expect to be in the ESA for at least the next 20-25 years. If this is the last scoreboard to be put into place before a new arena would be built, they may want to spend a little more to make sure it lasts and to make sure it's not severely obsolete in the next decade.

When the announcement comes tomorrow (my assumption), the new scoreboard would be the capstone on the recent ribbon and scorer's table upgrades the arena has received. Yet another thing to that has me excited for next season and a realization that we're still over four months away from starting.

Randy Rigby has stated that they want to do this right. Let's see how they do tomorrow.

I promised you all a BIG announcement today on The Big Show, but it looks like it will probably have to wait for another day. My apologies.

Won't be long though. Maybe early next week. I promise it's worth the anticipation. In the meantime, stay tuned.