Share All sharing options for: The Downbeat #1069: ESA Brings Sexy Back Edition

As many of you have heard Energy Solutions arena is getting some big time upgrades. Here are some more mock ups from YESCO's website. 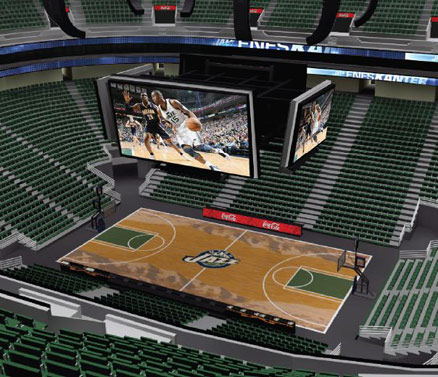 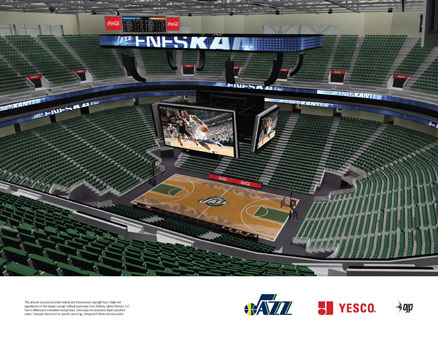 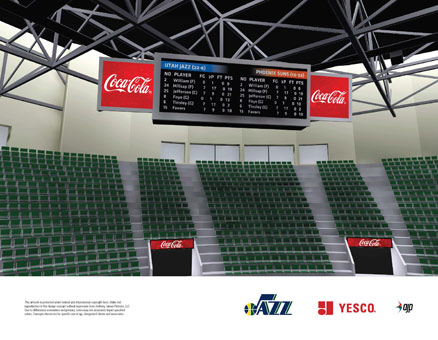 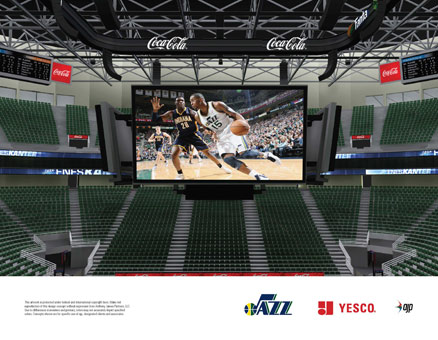 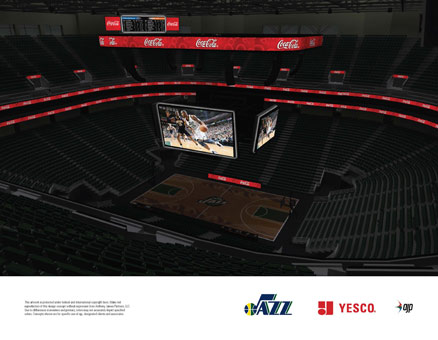 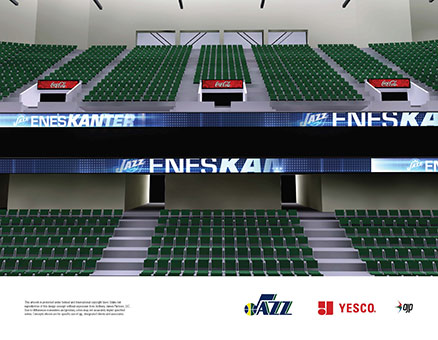 Having seen the amazing HD scoreboards in Banker's Life Fieldhouse in Indianapolis I can tell you all that you are in for a treat. It's amazing. The real winners are those who are in the upper bowl. While the real show for those in the lower bowl is being close to the action, those in the upper bowl get amazing views and it really does enhance the experience. Just get ready for an increase of in game advertisements. But if you're on the fence about buying season tickets in the upper bowl, do it now. Trust me with the new improvements you'll get your money's worth.

According to some other sources there might have been some other motivation for this move.

Source : The Jazz only upgraded that Jumbotron because the NBA basically demanded it. It's true. Look for more luxury seats soon as well.

This really should come as no surprise if it is true. It seems a lot of teams have been making big investments to their facilities. With all the advancements of home theater systems and the ability to watch NBA games online, on cable, satellite, via twitter, microblogs, etc, the NBA needs a way to keep up with that experience.

Energy Solutions arena is getting older. It's about 30 years old. They have to make improvements to keep up with the league. Not paying Al Jefferson will help them.

Tomorrow the Utah Jazz will bring in Michael Carter-Williams for a workout. The Utah Jazz have almost brought in every point guard prospect in this year's draft. They are not shying away from their greatest need. The only point guard they have not brought in for a workout is Trey Burke. With Burke projected to go as high as Top 5 it would be very rare for a team like Utah whose highest pick is #14 to be able to work him out.

Once again the Jazz are covering every facet of this draft. I can't remember the last time the Jazz were so thorough in their draft preparations.

The Jazz also had Shabazz Muhammad and Tim Hardaway Jr in Utah today for a workout. Muhammad was unable to play because of an injury. This probably threw a wrench in the Jazz's plans for the workout seeing as they had intended this to be a 4 on 4 workout. Tim Hardaway Jr in our conversations with him was very cordial and a very nice young man. HIs personality is one that would fit in Utah immediately because you can tell he just cares about others. I'm not saying he'd be a star but he'd be a beloved role player in Utah.

Closing thought on the improvements to the arena. The improvements to the arena were 15 million dollars. In other words, 1 Big Al Jefferson. There was a reason the Jazz chose to make these improvements this year. The Jazz will have plenty of cap space this year and it looks like they intend to keep it. The NBA is a business after all and an NBA owner does not just pour 15 million dollars worth of improvements--of his own money, I might add--into an arena and then go make it rain in free agency. There is a precedent for doing that type of thing and it doesn't end well. (cough, cough, Marlins, cough, cough)

This signals a new era in Jazz basketball. The Jazz will indeed go lean in payroll next year. Because the ownership will demand it after dropping a lot of money in their arena. This is a sign that they need some extra bling to put butts in the seats while the Jazz go through some growing pains. That's exciting. The Jazz are finally going to move on from the D-Will Era, for good. This is just another sign that it's close.