The Emperor Has Returned Edition- The Downbeat #1071

How many life rafts are they going to throw in to save Corbin?- " BYU Alumni" from the comment section of the Deseret News

Share All sharing options for: The Emperor Has Returned Edition- The Downbeat #1071

Having the Downbeat on Thursday is awesome! It seems like Wednesday was the most common day for games last season, and now in the offseason... we have gotten two HUGE announcements on a Wednesday. A few weeks ago the Jazz announced Karl Malone was coming back to the Jazz. Now, yesterday bum bum bum...

It is now official, Jerry is officially back with our Utah Jazz! It was announced that Jerry has signed a multi-year contract with the Jazz as a Senior Basketball Advisor.

Some of Jerry's responsibilities:

So it basically sounds like Jerry will do what he wants. I'm excited about the "occasional practice observation"

Its interesting to me that after Dennis has been here for a year the Jazz are returning familiar faces. The media has given credit to Ty (and yes I imagine they asked him and made sure he was "okay" with it).

I fully recognize that people can change and grow it does seem weird however that not that long ago Ty didn't have much to say about Jerry and Karl. And that prior to a few months ago it was almost taboo for the media to even mention Jerry as you know that might undermine Ty and of course speaking of Karl Malone in a favorable manner was strictly forbidden. 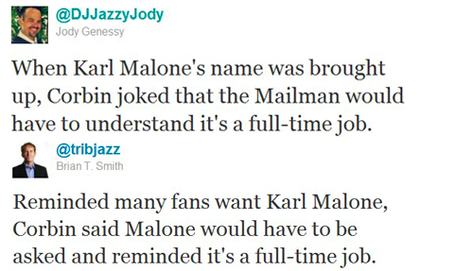 And this is when Jerry has been brought up with Ty in the past. (http://jazzfanatical.wordpress.com/2012/04/24/off-day-quotage-and-udqms/)

Tyrone Corbin on whether he spoke with Jerry Sloan after the Magic game: No, I didn’t. You know, I wanted to talk to him and I didn’t see–I didn’t get a, you know, all the stuff that was going on, I didn’t get a chance to see him and I was a little longer than normal in the back, so.
421 ty shootaround
[Were you able to visit with Coach Sloan?] Not yet, I will.

So yeah it seems like Ty has had to do a complete 180 if it was his idea to bring in Karl and Jerry. Hence I don't think it was. Does he support it... sure. Did he beg the FO to bring them in...no.

Dennis Lindsey makes the most sense right in bringing Jerry and Karl back right? He has been able to exert more of his power and things are getting done. I mean these things weren't getting done in the past and now that KOC is on his way out and Lindsey is doing things his way they're getting done. So yay.

I have been told that Greg Miller and Dennis Lindsey like to surround themselves with the best people for a job. They don't care who that person is. They aren't into "yes men" or long time loyalty/family friends but under-qualified type hires. Thats why I think Jerry coming back is in large part due to Dennis Lindsey.

So kudos to Dennis for helping the Jazz return to their roots. Thank you Dennis from bringing in Jazz legends who have brilliant basketball minds, who can actually help the Jazz to succeed. And if it wasn't lead by Dennis thank you KOC/Greg or whoever for making these changes!

Steve Luhm of the Salt Lake Tribune talked to Jerry last night, here's what he had to say:

And make sure to NOT miss Jerry's presser today at 10:30 MT

Speaking of Jerry. Here is an amazing blog post by @jazzbasketball1, who dispels the myth about Jerry not playing rookies. This post looks to be the first in a mythbusting series

Note: This is the first of a series of "Jazz Mythbuster" posts intended to clear up many common misconceptions and false narratives that have been perpetuated by either fans or media regarding the Utah Jazz and their franchise history.

So please go back and check for future Jazz mythbusting posts. In fact you should check Jazzbasketball1's blog every day. Its seriously the most excellent Jazz blog. (http://jazzbasketball.wordpress.com/)

Jazzbasketball starts in the 1998 season analyzing Jerry's tendencies to play talented rookies. The premise of the post is that Jerry played players that he thought gave them the best chance to win regardless of age or experience.

Deron Williams is an example that is used in the post. Deron did not have stellar stats before the All-Star break his rookie year. From the blog post here are Deron's numbers:

Despite EVERYONE knowing that Deron didn't play enough and Jerry admitting as much... here are Deron's minutes and playing time compared to our Kanter and Favors ( talented #3 picks like Deron) (again from this amazing blog post)

Yeah so Deron had more starts his ROOKIE year than Favors and Kanter have COMBINED their first two and three years with the Jazz!

Jazzbasketball1 explains the reasons behind why some veteren teams contending for a championship probably won't be playing rookie as much. The Jazz the last two and half seasons were not contenders. There is no excuse of the lack of minutes to our young players.

Those two seasons of mediocrity squash any notion that limiting Utah’s young players in favor of veterans who theoretically gave the team a better opportunity to win was a wise decision. Given the success Utah has seen when the Core-4 has been given increased roles - it also flies in the face of Jerry Sloan’s coaching philosophy in which he consistently played whoever he felt gave him the best chance to compete regardless of age or size or experience.

Go read this post. There is so much more to it than I can share here. Then take the time to read all of his posts, they are informative, interesting and entertaining.

My favorite Jazz media member is Jody Genessy and its not even close. Jody is an excellent writer, a true professional and a good friend. Jody is able to bring the Jazz and its players up close and personal to us the fans. The access he has to the team truly benefits us bloggers and fans. For Father's Day Jody wrote a piece on Gordon Hayward and his father.

In a day and age where it seems like the majority of NBA players/athletes have grown up without fathers in the home its refreshing to read of a professional athlete having a close, stable relationship with his dad.

Jody covers Gordon's teen years, his college years and now his time in the NBA and how his parents, namely his father helped him get to where he is now.

The Haywards had a tradition called "Van Talk". Gordon's dad would talk to him after every game, telling him what he did good and what he could improve on, evaluating Gordon's performance every game.

While Gordon can't have "Van Talk" anymore after games, Gordon's dad does text after every game.

From Jody's article Gordon Hayward on his dad:

"He's always been there for me," Gordon said of his father. "And I always appreciate him for that."

"He knows the game, and we're on the same page," the elder Hayward added. "We can have those kind of conversations and he can share his successes or his frustrations with me and I can relate to them, understand, and help him get through them."

That usually happens in eight to 20 text messages per game.

How wonderful to have such an invested parent. What a blessing. I hope Hayward is with the Jazz for a long long time.

Moni has often compared the Jazz to different popculture references. She did a REMARKABLE job of comparing the Jazz team a few years ago to the Princess Bride: 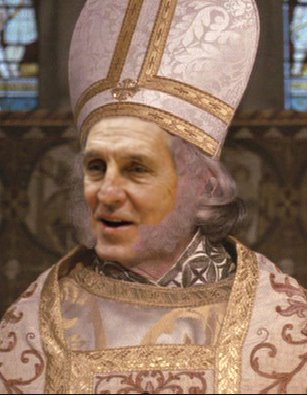 If we were to compare this years Utah Jazz team to a movie or TV show what would it be?