Share All sharing options for: The Downbeat #1074 - The "Please Get Dennis Lindsey a Black Bean Burger" Edition

I was doing some reading up on the Jazz coaching vacancy and got reading about current player development coach, Brad Jones, who I have a feeling will be with the team for a long time, when I came upon this post on San Antonio's website. If you have a minute, it's a good way to find out a little bit more about Brad Jones, Dennis Lindsey, and Frank Layden. Also, in case you ever need to identify him in a lineup, this is Brad Jones: 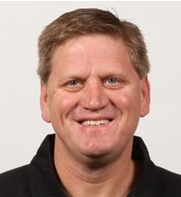 Brian Windhorst compiled a really interesting oral history on the events of and leading up to the 2003 NBA Draft. It's worth a read, but the part I found interesting was this portion on Darko Milicic:

Chad Ford (draft analyst, ESPN): Darko had just arrived in New York a few days before that. There's just a curtain that was separating the two gyms and I walked over to (Pistons president) Joe Dumars and asked if he knew who was working out next door and he said he didn't. I told him Darko was over there. He asked Cornstein if he could come over. It was an impromptu workout.

Chris McCosky (Pistons beat writer, Detroit News): I don't think it was a coincidence. I remember they were talking about it the day before.

Cornstein: A number of guys filtered over to the other gym. Every shot, every move, he just looked phenomenal. Everyone from the Pistons was there. Joe Dumars, [coach] Rick [Carlisle]. Top to bottom, they were all there.

Ford: Darko was just phenomenal. It couldn't have been more perfect in a certain way. At some point the coaches got involved and asked to see particular things. And Darko couldn't miss and was aggressive and rose to the moment with the players watching. I was sitting next to (Dumars). He's not expressive, he plays everything close to the vest. But Darko was just so impressive. It was literally the best workout I've ever seen. I've seen hundreds and it was the best. When you have a 7-1 kid, who is 17 years old, doing the things he was doing, it was a "wow" moment, especially for a team that needed a big man. There was just a buzz afterward.

I think this was the moment that Chad Ford started cautioning against putting too much stock in a draft workout. It's only a part of the evaluation process, and all truth told, it's probably not even a top two most important thing in the evaluation process. So when you hear about a great workout, or a poor workout by a draft prospect, you should probably remember the Darko Milicic cautionary tale.

Speaking of the 2003 NBA Draft, it is considered to be the best draft of the last 10 years. Next year's draft is probably somewhat comparable to it. With all of the draft coverage and the buzz about how great next year's draft class will be, I wanted to compile a personal list of the best 10 players from the last 10 drafts and see what we see: 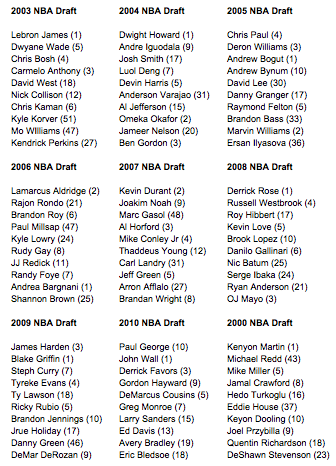 You could certainly argue about the order of the top ten guys from each year, but with the exception of a guy here or there, these are the best 10 players from each draft. I included the 2000 draft class, because it was certainly weak and there is a chance, although I think a small one, that 2013 will be similar. But with the exception of 2000, each draft has contained 1-2 All NBA Players, 3-4 all stars, 5-8 starters, and 10 rotation players. Pretty much every draft has these things and there is little reason to believe that 2013 will be much different. In fact, I subscribe to what Jonathon Givony of Draft Express recently said on a podcast with David Locke:

"I just don't really believe in 'bad drafts' I think that's a lazy way, its a lazy exercise. I think that there are 60 players that are gonna get drafted and there's no way that they're all gonna be bad, so, you know, it's not the type of draft where you come out of it with a Lebron James, or a Dwight Howard, or something like that, or even Kevin Durant. But I think that there are going to be good players drafted. I really believe strongly in the American talent pool and I think that this is a very good year for international draft prospects, so I think that these guys are gonna be okay. Every year I've been doing this, I always hear 'it's a weak draft, it's a weak draft,' I still haven't seen a strong one, according to the experts. I think that's just the way it is. It's so much easier to write off a draft as a bad draft. It's a catchy way of looking at it."

I'm not the world's greatest evaluator of NBA talent, by any means, but I feel confident that this draft will have an all star or two and at least 5 starters and 10 rotation players. Now the Jazz just need to find some of them.

By now you have certainly heard of Houston's willingness to trade Thomas Robinson for a 1st round pick in this year's draft, in order to clear enough money to offer Dwight Howard a max contract this summer. The assumption is that the Rockets would draft a foreign prospect they could keep overseas for a year and off their books. Judging from the reports, the Jazz could probably snatch Robinson for the 14th pick in this draft. Let's take a close look at the pros and cons of such a decision.

- Good Athlete and decent standing reach. Has the tools to be a good defender.

- Probably better than any big man the Jazz could draft at 14. Will be more ready to play next season with one year under his belt already.

-Has a favorable contract at $11.7 for the next 3 years with a qualifying offer of $6.2 million in the fourth year.

- Short and had a hard time finishing over NBA caliber defenders. Only shot 49.1% from within 5 feet last season.

I go back and forth on this debate. I think Thomas Robinson would be better than any available big man draft prospect next year, but not necessarily in the long run. He has a reasonable contract, but it will be more than any one the Jazz would draft at 14. I loved Robinson as a draft prospect a year ago, but he had some concerning performance issues in his rookie year. It would depend on who was available at 14 on Thursday, but today, I would pass on trading for Robinson. But ask me again tomorrow and you may get a different answer.