Share All sharing options for: The "Today is the Draft" Edition- The Downbeat #1077

Don't forget the Jazz will host a draft party. They are fun, you should go to one, tonight if you can. 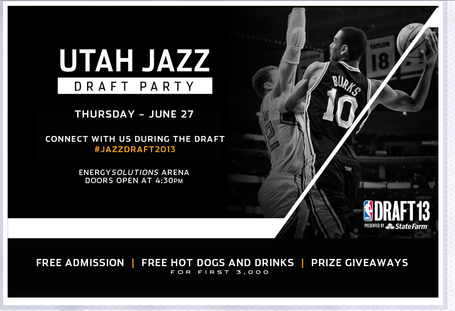 Jeremiah Jensen of KSL wrote a great piece about the best value picks in Utah Jazz draft history. (Follow Jeremiah on twitter (@JJSportsBeat) , he is super nice and he interacts with fans really well)

When healthy Kirilenko was one of the most dynamic players in the league. He could impact the game on both ends of the floor. During that All-Star season he averaged 17 points, 8 rebounds, 3 blocks and 2 steals while shooting 80 percent from the free throw line.

Jazz fans will never forget his 46-point performance leading the Jazz back from 22 points down to beat the Miami Heat. It was so good it's now referred to as the miracle in Miami. He scored 11 points in the final 28 seconds of regulation which included three 3-pointers and a buzzer beater that forced overtime. Not bad for a second-round pick.

If you redrafted the 2006 draft you can argue Millsap should have been a top five pick.

Big Mark would become a two-time defensive player of the year, was named to the NBA All-Defensive team five times, lead the league in blocks four times and was named an All-Star in 1989

He was a 14-time All-Star, two time NBA MVP in 1997 and 1999, and was named All-NBA 11 times. His 36,928 points is the 2nd most in NBA history behind only Kareem Abdul-Jabbar. No player in NBA history has attempted and made more free throws than Karl Malone. He never missed the playoffs during his 19 year NBA career. He is a two time Olympic Gold Medalist and a Hall-of-Famer.

Tonight is Dennis Lindsey's big night. He is in the spotlight. I personally, have been really impresssed with the work that Dennis Linsey has done with the Jazz. The culture is changing in a very good way. I am very excited to see what Dennis does tonight. Bill Oram wrote about Dennis and the 2013 draft.

Asked if he felt any different going into the draft in the lead seat, Lindsey said no.

"I wish I could say that I did," he said, "but it gets back to a level of participation. In San Antonio and Houston I’ve been the person on the phone to consummate deals. I’ve been the lead in drafts and decisions and I’ve been [in a supporting role]."

The most visible change Lindsey brought to the Jazz’s pre-draft preparation, which he has spearheaded in tandem with O’Connor and Walt Perrin, the team’s vice president of player personnel, was the number of players to work out for the team. Sixty-seven draft hopefuls visited the Jazz practice facility, although Perrin said that was also a product of the Jazz having three picks, as well.

"I challenged Walt to bring in more players and the Millers have made that financial commitment," Lindsey said. "And I think we’ve used our time wisely."

As you know I have read John Stockton's book. I plan on sharing a little bit about it throughout the summer in my downbeats.

This made me giggle

But did you know he wore short shorts mainly because the assistant trainer gave them to him at that length every year? It wasn’t until late in his career that he made them slightly longer.

"He said, ‘Are you adding anything to your shorts?’" Stockton recalled in a Tuesday phone interview. "I said, ‘You can do that?’"

Added Stockton: "I was just lucky to have a uniform.

I love John Stockton. His book made me love/respect him even more which I did not think was possible.