The Jazz have added Trey Burke and made all of our wildest draft day dreams come true!!!

It has been over 12 hours since the Utah Jazz traded up in the NBA draft and selected Naismith College Player of the Year Trey Burke...and I still cannot believe it.

If you have been following along here at SLCDunk for the past few months then you know that both Clark and I have strongly been advocating for the Jazz to move up in the draft and select Burke. In last weeks Downbeat I proposed a hypothetical offseason plan which I dubbed the "Fantastic 5 Plan" and which had the Jazz moving to pick #7 to select Burke. The week prior I proposed a hypothetical offseason plan, dubbed the "Draft Day Trade Plan" which had the Jazz moving up to pick #8 to select Burke. In each instance, while Burke was the target and the goal, it took a leap of faith to think that Burke would slide to the Jazz’s draft range in order for Utah to be in position to make the selection. Dennis Lindsey made our draft dreams come true by swapping picks #14 and #21 to move up to #9 and land the PG we've been dying for.

Last night was the perfect storm of draft wackiness, which ultimately allowed the Jazz to prevail in landing their targeted point guard of the future. For the past few weeks, Clark and I have been trading messages on what needs to happen for Burke to drop into Jazz territory. Our final conclusion from earlier this week was that the biggest obstacle for the Jazz was whether the New Orleans Pelicans would draft Burke at #6. As draft boards kept shifting around we speculated that in order for the Pelicans to pass on Burke, two things would likely need to happen: 1. Anthony Bennett needed to be selected in the top 6 (we hoped he’d go to the Wizards at #3); and 2. We needed someone to make a surprise pick outside of the consensus top 6 players (Cody Zeller’s name kept popping up). To our surprise both wildcards happened and the Pelicans selected Nerlens Noel and traded him for established point guard Jrue Holiday.

The best part about the whole trade was learning of it from Burke's mother, Ronda Burke. As Trey strolled across the stage to shake hands with Commissioner Stern, Mrs. Burke was being interviewed on ESPN. Hoopsworld summarizes the interview as follows:

"We’re hearing (about the trade), but we’re waiting patiently and we’re just blessed that his name is up there," said Ronda Burke, Trey’s mom. "Regardless of where it is, he’s going to give his all. This is a dream he’s had for a long, long time. When he was a little boy he drew a picture of himself in an NBA jersey and now here he is."

To top it all off, the euphoria of draft day was captured best by Greg Miller when he tweeted out the following picture of Dennis Lindsey, no doubt ecstatic at a perfectly executed draft plan. 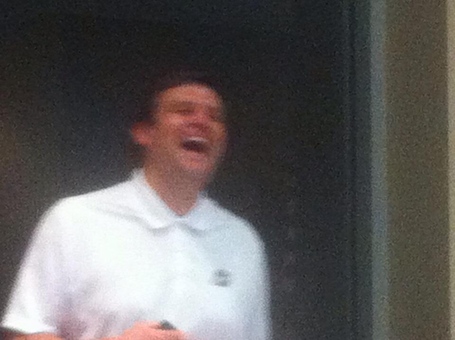 So why Trey Burke?

Earlier this February I had set out to scout each of the potential Jazz PG draftees as they concluded their conference seasons and began tournament play. The guys I was focusing on included Marcus Smart, Myck Kabongo, Michael Carter-Williams, Archie Goodwin and Trey Burke. The more games I watched the quicker it became apparent to me that there was only one guy who's skill-set matched up with the Jazz, that of course being Trey Burke.

Many times when we look at the draft boards and get hung up on lumping players together that will fit our team's positional needs. For obvious reasons, the Jazz have needed a PG for 2.5 years now. However, I think the choice of any player is much more binary than most teams want to admit. While there were a few okay PG options in the draft, it would be less than ideal for the Jazz to pick a player that does not fit their system and their locker room. I strongly believe in the Bill Belichick school of drafting, i.e. you trim your draft board only to the players you can see on your team and you're not afraid to move up or down the draft board to get them. The Jazz did this on more than one occasion last night.

There are a lot of different scouting reports on Burke that I could link you to but really they all say the same thing. What sets Burke apart is that he is a complete PG. He is good working the pick and roll. He can shoot from 3 and in the mid-range. He can attack the hoop for easy layups or kick the ball out to willing shooters. He is fearless in big moments and a true on court leader. This is EVERYTHING I want from my point guard. This is EVERYTHING the Jazz have always had in John Stockton and Deron Williams.

There are a lot of highlight videos out there where you can see Burke exhibit all of those traits above. I will however just point you to my favorite highlights found in this fabulously done Draftexpress video below. Specifically, fast forward to the pick and roll highlights found at 1:13 (scorer) and 6:04 (passer). Nothing gets me more excited about Burke than watching him turn the slightly clumsy Mitch McGary into a highly efficient scorer out of the pick and roll.

Lucky for us draftniks the Jazz's night did not end with the Burke selection. The Jazz later maneuvered back into the first round by sending an undisclosed amount of cash (must be no more than $3.1mm) and pick #46 to Denver for pick #27, which the Jazz used on French center Rudy Gobert. Gobert is an interesting prospect solely because of his length and potential to be a rim protector. The Jazz have had success in the past with selecting less heralded 7 foot rim protectors in Greg Ostertag and Mark Eaton. Gobert however does not come with the experience and collegiate background (Kansas and UCLA, respectively) that either of these guys had.

While I have not seen a lot of game footage of Gobert, the guys at Draftexpress did put together another fantastic video breakdown.

It sounds as though Neto will be a draft and stash player and be left overseas to develop. Like Ante Tomic, there is a chance we won't be seeing Neto in a Jazz uniform any time soon.

Now that the draft is over the Jazz can shift their focus to free agency. Calls to free agents can begin on July 1st, with players eligible to sign new contracts beginning on July 10th.

Here is a quick glance at the Jazz's current roster/balance sheet:

This breakdown does not include cap holds for current players or minimum roster requirements, but does give you a good idea of how much money the Jazz have available to spend should they choose to renounce all of their current free agents.

My knee-jerk reaction is that the Jazz still have some big roster holes to fill. Specifically, the Jazz could use a versatile PF to play along with Favors/Kanter/Gobert. The ideal candidate should be able to stretch the floor a bit with his jumper. To me sounds a lot like Paul Millsap.

The Jazz will likely also want to add a veteran PG (or 2) to the team. I could see them pursue any number of guys from Jose Calderon to Beno Udrih to Darren Collison. The ideal candidate should be comfortable with a starting or bench role. I could also see them bringing back uncle Jamaal Tinsley as a deep reserve.

I still think there is room on this team from a high volume perimeter scorer. Eric Gordon's name has been brought up a lot as a potential trade target in the past but I could also see the Jazz chasing a guy like OJ Mayo too.

So what do you guys think? Use the comments section to add your two cents regarding the upcoming free agency period.