NBA Draft 2013: Utah Jazz Center Rudy Gobert and what to expect from a mystery

Share All sharing options for: NBA Draft 2013: Utah Jazz Center Rudy Gobert and what to expect from a mystery

Unless you work for the Utah Jazz, then you haven't met Rudy Gobert as many times as I have. Mychal had a way longer interview with him than I did, and you all should watch it immediately again right now.

Who is this guy, though?

Now I've had more data points to go off upon, and I still want to know who he is. Now, Mychal and I saw him at the NBA Draft Combine in Chicago last month. And well, honestly, he looked like a bubble lotto guy there. On Day 1 after we had just seen the centers I felt as though it would come down to the potential of Gobert vs. the polish of Kelly Olynyk. we already have two guys who have the potential and little polish in Derrick Favors and Enes Kanter. Kelly has the range to supplement their brawn, and is older than both of them right now, while being a rookie. So if you went for need, in your rankings you would put Kelly ahead of Rudy.

However, in a draft like the 2013 draft where there was very little separation between the #11 guy and the #31 guy you should probably swing for the fences and attempt to get a home run, right? So in this regard you go for the mystery instead of the boring old guy. And there is no greater mystery right now than Rudy Gobert. Sure, we have more data on him than some guys like Giannis -- but he's not on my team, so I don't really care.

What I do care about is what Gobert can be. And with his length, height, tenacity, and mentality . . . you know what he looked like at the NBA Draft combine?

No, not joking. Compared to the other draft hopefuls, this is what he was doing

Am I saying that Gobert is the next Shaquille O'Neal? No. I'm not. But by the same token, he's *NOT* not the next Shaq either. We don't know. It is possible that if he develops his body and his game, he could be very good. Or he could be bad. I don't know. The combine isn't everything. What little we did see there gave us mixed ideas. I loved how he always went to the rim, and tried to finish with contact. He's also a significant threat to change all shots, even when he rotates late. If you want a bench guy to try to dunk, get offensive rebounds, and block/change shots -- then I think it's possible that we have that with Rudy Gobert.

But we had that with Greg Ostertag, Kyrylo Fesenko, and Kosta Koufos. All three of them were limited and lost time to guys like Jarron Collins who wasn't a beast or athletic, but played many more minutes. Is this going to be Gobert's fate as well? I sure hope not.

Rudy was drafted #27 in the 2013 draft -- in fact because of what was happening on draft night I ended up having availability to interview him BEFORE Trey Burke who was picked almost 20 spots ahead of him. I was the guy who told him he was traded, the other credentialed reporters in the room didn't even know and were asking him questions about the Denver Nuggets.

Amar: Just to clarify, do you know if you've been traded or not?

Amar: . . . because it's been confirmed that you've been traded to the Utah Jazz. 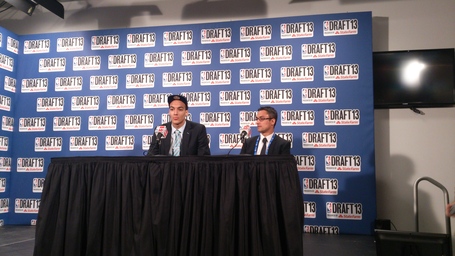 Well, as a #27 pick I think the first thing is to see what kind of players are available there. I don't want to compare him to "bubble lotto guys" because that phrase doesn't mean anything. And I don't think it's fair to compare him to High school / LSU version of Shaq either. That guy was a lot heavier and grew up playing basketball in the American system. So, let's look at the other guys at #27 over the last 40 years of the draft.

Some of these guys don't even make the league, while the majority of the guys who do are not remarkable. So based on this method, it's likely that Rudy is not remarkable. But we've also seen a lot of rotation guys come from here and even a Hall of Famer. The larger group of these players who do succeed are bigmen who have defined skills and roles. Elden Campbell is a great example, if Rudy Gobert can be Elden Campbell will you be happy? Or do you expect lotto guy type success from a guy picked three spots from the second round?

If you looked at every 7' footer who has come into the league in the last 5 years you get a pretty interesting group.

N.B. Round 3, Pick #61 is my own code for "undrafted". It is an internally consistent code I use for other excel calculations.

These players are listed by their total regular season minutes over their first three seasons, and their associated points, rebounds, and blocks for those periods. Some of these guys are pretty good, some are, well, not so good. The funny thing is that the minutes don't follow a rhyme or reason. But overall we like to believe the better players rise to the top, regardless of their draft position.

So then is it fair to compare Gobert to Shaq? I don't think so. Let's compare him to all the 7' or taller players from the last 5 seasons who have been picked #20 or lower. This group is 23 players long and contains guys1 like Marc Gasol, Omer Asik, Jason Smith, Timofey Mozgov, Ryan Hollins, Kosta Koufos, Alexis Ajinca, and so forth. I think this is a interesting group that is headlined by some low draft picks who turned out to be rotation guys or better. Of course, this group has some unsuccessful players too. The average for the total group of 7' ers in the last 5 years is 5.1 ppg, 3.4 apg, and 0.7 bpg. The average for the Pick #20 or lower group is 3.3 ppg, 2.6 rpg, and 0.5 bpg.

The era of the bigman sure has diminished.

So I guess we bring this back to the beginning again. He's a mystery -- even one aspect of his game is all over the map, look at FT%:

There's a 40% range between his FT% between 2010 and today. And it is not following a trend. And this is just the most fundamental part of the game, a free throw.

I am not selling my stock in Gobert yet. I like him. He has a lot more upside than many players we draft this far down. He's very young, has off the charts measurements . . . we just need to get him in the gym with Karl Malone pronto.

Glad to hear that im gonna have the chance to work with @TheDeliverer_32 , great opportunity for me.

He, Favors, and Kanter can give us all of the blocked shots, and all of the offensive rebounds.

Perhaps it's in his best interest to play in all of the D-League right now? I don't know.

Few people know what we have in Gobert, aside from a confident young man who is ready to play.

Amar: How big a change is it going to be from playing in France to banging with bigger and heavier guys every night?

I think you are too Rudy. Even if we have no one to compare you to yet.