The Shine on You Crazy Diamond Edition- The Downbeat #1060

Share All sharing options for: The Shine on You Crazy Diamond Edition- The Downbeat #1060

You've all heard by now but Karl Malone was on the Dan Patrick show on Tuesday. Moni of course did a wonderful job transcribing said interview.

This was my favorite part of the entire interview

I loved it! There is still so much love and respect between these two players. I mean look at these two! (via jazzfanatical.com) 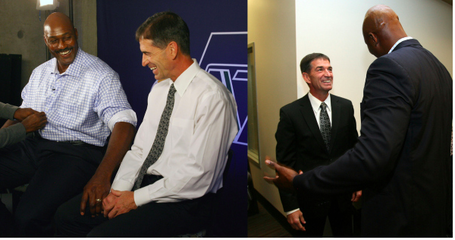 Its interesting to see everyone's comments over the past few weeks as Karl has been in the news. It is heartwarming to see the respect that fans and most media still have for the Mailman. Karl as done more for this Jazz franchise than any other player in Jazz history.

Yes, John and Karl were a dynamic duo and picturing them as separate entities is nearly impossible. I however feel that between his play, the publicity he brought the team and in my eyes just as importantly, all the charity work Karl did off the court whether it be for his foundation or secret acts of kindness that only have been revealed years later, Karl is tops. (And John Stockton is my very most favorite player ever to play the game of basketball on any level of the sport)

There is one thing that upsets me more than anything when it comes to Karl is when people, specifically when the local media makes fun of the way Karl talks. Does Karl talk differently than most Utahans and most Caucasians , yes. Does Karl talk like someone from the deep South, yes. Just because Karl speaks differently than the person making fun of him that is no reason to make fun of him. There is no justification for the ridicule that Karl has had to endure.

My Masters was in school psychology. I chose school psychology for many different reasons, one of which was to help promote equity in education. Living where Karl did as a child and the time period of his childhood Karl did not have access to the quality education that most of us have received in our lives. (Louisiana has recently received awards and "high marks" for their improvement in public education, that was not the case during Karl's childhood.) I, as an educated adult will never fault another for not having the advantages I was blessed to have received in my life.

My grandmother came to the United States from Germany when she was 21 years old. My grandma was unable to take English classes when she first came over so my grandma taught herself English. My grandma would read the paper ever single day to learn her new language. My grandma spoke with a strong German accent her entire life. My grandma was also one of the smartest people I have ever had the pleasure of knowing. Education was very important to my grandma. Despite her humble beginnings in the United States, her children all have college educations. Her oldest son was the CEO of a major cooperation, and my father had a successful career on Wall Street before he moved to Utah.

Karl is not only an NBA HOFer he is also a successful businessman. Since his retirement he has turned his NBA earnings into a multi-million dollar corporation, he has his Toyota dealerships, owns planes that he leases, among many other business successes.

My grandma and Karl are examples that show you don't have to have a formal education to be educated. They also demonstrate that the way someone talks is not necessarily an indicator of their intelligence.

TL;DR: Karl has what it takes to be invested in this team and will be a huge asset.

*Diana now steps off her soapbox and continues with her downbeat*

We have shared this quote a few times

Jazz General Manager Dennis Lindsey, "I feel really good about where we’re at in 14, 21, 46. We have the ability to move up if we want to move up, which is unusual at this date. And there’s very good reasons why we may stand pat and just select the three."

I'd like to focus on the part I bolded. Do you believe Dennis Lindsey is saying that they have the ability to move up because the assets they have make it easy OR is there actual something on the table?

If there is a deal already in place what do you think that deal is?

Also would you be willing to move a member of the Core Four in a draft day trade?

The young player that gets mention most frequently in trade rumors is Alec Burks. Broadcasters on the Utah Jazz radio station a few weeks ago were on a kick about saying how Alec would be the most likely to be moved, how they should move him while they can, that they'd rather have a high draft pick from this years draft than Alec Burks.

In my opinion Alec Burks is a fantastic player, who has a lot to offer our team. I believe his value to our team is worth more than a pick in this years draft. Alec is a slasher, who can create his own shot with the ability to finish and also get to the line. Alec's shooting is improving. Alec has that cocky attitude that this Jazz team desperately needs.

Come in here, dear boy, have a cigar.

You're never gonna die, you're gonna make it if you try; they're gonna love you.

Here is a small reminder of how awesome Alec Burks is

ICYMI: Clark, Peter, Amar and I did a video on Tuesday night. The part that I found most interesting was our discussion on identity and leadership.

I pose the questions to you guys:

What is the identity of the Utah Jazz?

Who are our leaders and what are their leadership styles?

Recently I read that the Finnish government gives all new mothers a box with baby supplies. They believe that all children whether rich or poor should come into this world on equal footing.

I thought it would be fun for all of us to pretend to give our coaching staff and our players playing of coaching boxes, . Playing/coaching boxes are full of items to aid each player or coach with what they need to be successful in the NBA.

I'll get it started for us. Lets start with our head coach Tyrone Corbin.

4. A card with Alec Burks name on it. 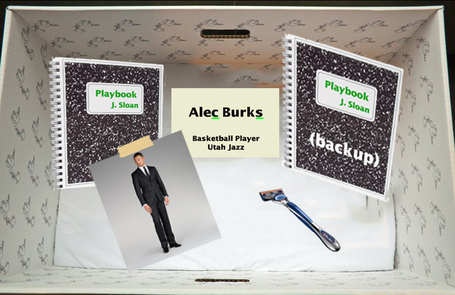 (Thanks Moni for the pic of the box!)

Last but not least! 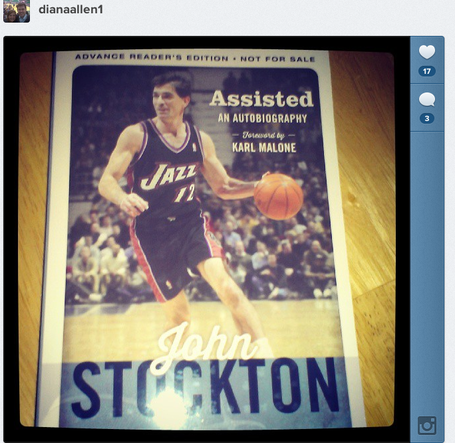 Yep, I have Stockton's book!!! (At least the advanced readers edition)