The Greatest Teammate of All Time - The Downbeat #1062

Sportsmanship, the draft, and reading way too much into interviews. It's your Monday downbeat.

Share All sharing options for: The Greatest Teammate of All Time - The Downbeat #1062

The NBA announced yesterday that Chauncey Billups won the first ever Twyman/Stokes Teammate of the Year Award. The story of Jack Twyman and Maurice Stokes is inspirational and if you only read one bullet point of this downbeat, I want it to be their story. You can find it here. It's a story that will change your outlook on life. Read it. 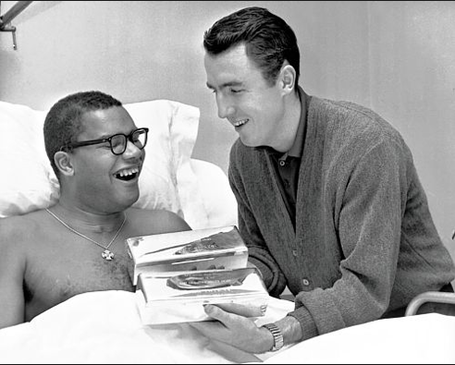 As far as the actual award goes, Chauncey Billups is an odd choice for the winner. I know the league just had the players vote for the winner with the stipulation that no one could vote for their own teammate, but I would have liked to see the winner determined by a few more advance stats. I broke down some numbers measuring the amount of high fives given, lessons taught to youngsters, and amount of bills paid on road trip dinners, etc. I came up with these Teammate Efficiency Scores (TES).

I'm not saying that Chauncey didn't deserve the award. But I am saying that Al Jefferson did. Proof is in the numbers.

I'd like to start a new series called "reading way too much into Jazz guy interviews." In this first edition we listen to an interview with Jazz Head Scout Dave Fredman.

"I think he (Burks) has plans to play in the summer league a little bit this summer and continue to move forward as the team does, as the young guys develop and we'll see what we can put around them.

"We are going to feature the young guys this upcoming season and add pieces that complement them. We expect them to improve with lots of playing time and we may lose some games next season, due to their youth, but it's part of the bigger plan to compete for championships and try to get good picks the next two seasons."

"We ask this question internally a lot: 'do we want to be a team that's going to be the 7th or 8th ranked playoff team, is that our goal, or do we want to build something a little bit stronger to where we feel like we can be a team that gets a home court advantage in the playoffs, or a division champion, or eventually move in that direction?'"

We are still debating, even up until now, about the goals of this team. And guess what? There are still people in this organization that are cool with just scraping into the playoffs every season. That is their goal. They use the term "playoff competitive" to dress it up fancier. They debate that it is a good goal in team meetings. And the rest of us let them speak about it. But their voices are being drowned out a little bit and they are realizing that it would be cool to be title contenders again...as long as it gets fans to show up for games.

Here are some thoughts on the draft and draft process:

-I'm always intrigued by what Jazz brass have to say about the workouts and the draft prospects. How much can you read into what they say? 10% 40% The opposite of what they say?

- In the same vein, after reading this, I'm almost certain that Milwaukee loves Shane Larkin.

- I still think the Jazz will use one of their picks on a foreign prospect that won't play in the league right away. I don't think the Jazz want 3 rookies on the team along with all the other young guys. And also, if they leave the pick in Europe or overseas, they can have someone else pay to develop them.

- I love a lot of things about Dennis Schroeder. But the fact that he is new to the game and seems like playing in the NBA is his main goal worries me a bit. It's hard to gauge his competitive fire that is necessary at the NBA level. I would rather draft him than almost any other point guard prospect, but if I were the Jazz, I would work hard to try to figure him out. How much does he want to win in the NBA? Will he be satisfied after cashing one year of big pay checks?

Clarence Gaines is a fun follow on twitter. He has been around the game a long time and was a lead scout for the Chicago Bulls during the Jordan years. He has been helping younger NBA fans appreciate some of the lesser known talents from the CBA and early NBA years on his feed. I thought I would do the same for the next few downbeats. Let's start with Truck Robinson. Robinson was like a better version of Paul Millsap. Truck put up essentially 23 and 16 for the New Orleans Jazz in 1977-78 while leading the league in rebounds per game. Robinson did all of this at only 6 feet 7 inches. He had a nose for the ball, and while not a gifted scorer, he knew how to be at the right place at the right time for put backs. So let's appreciate Jazz history by watching Truck Robinson.

My favorite part of the video is Robinson's unnecessary dunk as time expires and the 76er player's half-hearted attempt to kick the ball afterward.