The Downbeat #1080 - So Much Depends Upon a Rookie Point Guard

What can we expect from Trey Burke? Free Agency gets underway. And do you want to play basketball with some bloggers?

Share All sharing options for: The Downbeat #1080 - So Much Depends Upon a Rookie Point Guard

Free agency officially began last night at 10 PM MST, and for those of you who followed along on twitter, it was a fast paced and fun filled evening. There were jokes and rumors and reports galore. Here are the top 5 stories (in no particular order) that were talked about last night:

1. Thomas Robinson was traded to the Portland Trailblazers for future 2nd round picks and the rights to two foreign players

We knew he would go for cheap. Obviously the Jazz didn't get him, but Portland is quietly putting together a young and exciting team. Now if they can sell the overrated LaMarcus Aldridge while his stock is high for picks and young players, they may really have something there. It's also important because...

2. The Rockets were the first team to officially meet with Dwight Howard

Now that the Rockets have cleared Robinson's contract, they can offer Dwight a maximum contract worth $88 million over 4 years. If Howard ends up in Houston, they could really be a formidable opponent for the Jazz the next 5 seasons or so. It's too bad, he's most likely going to be in the Western Conference.

3. Gal Mekel agreed to a multiyear, minimum contract with the Dallas Mavericks; Kyle Korver is reported to be heading to Brooklyn

The Jazz were really interested in Mekel at one point. Don't have to worry about it now. Also, Korver and the Nets would be a brilliant fit. Sad we couldn't get him here. If I were Korver, I would want to live in a cool city with a good friend and compete for a championship too.

4. The Bobcats are pursuing Al Jefferson in free agency

The bigger story here is probably the fact that Al seems to be out of the Jazz's sights right now. I could be very wrong about that though.

5. The Jazz have reached out to Chris Copeland, are interested in Oj Mayo and Chase Budinger to some degree and will formally meet with Paul Millsap sometime today

Lots to digest here. I still don't think Paul Millsap will be back with the Jazz, but stranger things have happened. I think it would be smart on both parties' parts.

Dennis Lindsey denied it somewhat, but I believe the fact the Jazz were able to land Trey Burke on draft day has to change the team's free agency plans. Instead of looking for a starting caliber point, the Jazz would do better to get a second or even third tier veteran guard who will be okay with either starting or coming off the bench. I think it would be hard to sell a lot of the free agent point guards to come into a possible back up role. If I had to guess, I still would predict that the veteran guard the Jazz land this off season will be Luke Ridnour. The Wolves need to cut some guaranteed salary and are paying their three and a half point guards too much money right now.

I also think the Jazz will add a shooter from free agency and one more big man who is capable of playing 25 mpg and possibly starting some. Let's say Carl Landry, Randy Foye and Demarre Carroll. And let's say Chris Copeland to round out the roster, just so we can speak in hypotheticals moving forward.

So how much would that roster win next season?

This team would have the makings to be very tough defensively. The real question would be how effectively this team could score. I personally think this team would be more competitive than national pundits, and maybe even many Jazz fans, would guess.

I hate to put so much pressure on him already, but the success of the aforementioned team would rely very heavily on what Trey Burke could offer in his rookie year. I've crunched the numbers and have come up with some projections, I feel fairly confident in. Amar posted these numbers, as a starting point, in his piece over the weekend:

Three consensus All-American Collegiate players who have eerily similar styles of play and college stats. And before you go worrying too much about the DJ Augustin comparison, Augustin had a couple of good NBA seasons. But he played for the Bobcats and lost some confidence when Charlotte brought Raymond Felton in to replace him. But I do think Burke will have a rookie campaign somewhere in between Augustin and Paul. Chris Paul was really amazing right off the bat, and as you can see from the numbers, he had a very polished offensive game.

After careful thought and consideration and knowing what I do about the Jazz and their offensive gameplan, I have come up with these numbers for Trey Burke's rooking season:

I think he will have his ups and downs, but have a really solid year, with lots of great highlight plays. He's also the only point guard in this draft that I would consider starting from day one, although, he will obviously have to prove himself worthy of that role in training camp. I would guess that he starts most of the season, though.

In case you missed it: 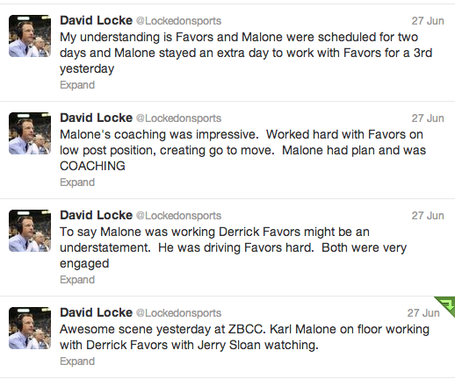 Pretty cool. I think it's safe to say that Karl Malone won't just be mentoring Favors with phone calls from Louisiana. I am excited to see what Derrick can add to his game this summer.

There was also this:

So I have talked about a summer get together a few times on this blog, but I am going to be in Utah most of July and I think I have located some public outdoor basketball courts. I would love to have a little 3 on 3 tournament and three point shooting contest, etc this summer and I am looking at the weekend of July 26-27. We could do it either on Friday evening or Saturday afternoon. It would be a fun way to get to meet up and hang out. We can grill some hotdogs, and play the sport we love to talk about. What do you guys think?