Jazz win, Neto shines and maybe the RMR will return?

Share All sharing options for: The Summer League Continues Edition- The Downbeat #1089

Yay the Jazz beat the Nets. I mean the way Hayward took over the game and blocked Deron during all the important parts of the ... oh wait, never mind its summer league.

The Jazz pretty much dominated the Nets. Neto was quite neato. Jeremy Evans and Chris Roberts lead the team with 15 points a piece.

I know it was discussed a lot on Twitter but I didn't have time for much Twitter yesterday and honestly I haven't had time to watch the whole game yet but how are people feeling about Burke not playing? I don't think its a huge deal. I mean I don't really like it but at the same time it doesn't really bug me.

An interesting article on ESPN about Trey sitting out. Here are a few highlights

Sitting out Wednesday allowed that message to resonate.

"Absolutely," Burke said. "Every time I step on the court, there's a target on my back. I think guys are always going to try to make a name against me just because I had a name coming out of college. But I haven't [accomplished] nothing on this level yet. So I'm just trying to continue to learn and make a name for myself on this level as well."

Dressed in his game uniform and seated between the coaching staff and the rest of his teammates Wednesday, Burke seemed antsy at times and later admitted it was difficult to be that close to the action and not participate.

But he was also engaged each time a coach leaned over to whisper instructions and point out lessons on the court.

Lowe said Burke needs to push the ball, speed up the tempo on the court and play much faster than he did at Michigan in order to have an impact in the NBA. Secondly, Lowe said it was beneficial for Burke to learn tendencies of players and break down some cerebral aspects of the game.

"I wouldn't say it's overwhelming, because I feel like I'm picking it up pretty good," Burke said. "I'm still trying to get adjusted, get comfortable with the whole offense, the whole defense, the terminology as well. It's different from college, now with the Jazz. I think the coaches are doing a good job of learning throughout mistakes and teaching."

This made me giggle

That learning process will extend to the coming weeks as Burke, the most decorated rookie in the 10-team Orlando field, moves to Utah to follow a line of productive Jazz point guards -- from Hall of Famer John Stockton to LOL Mark Jackson, Mo Williams, Devin Harris LOL and Deron Williams.

I like Raul Neto A LOT! I am so excited that the Jazz drafted him and I really really hope they can bring him over this season. 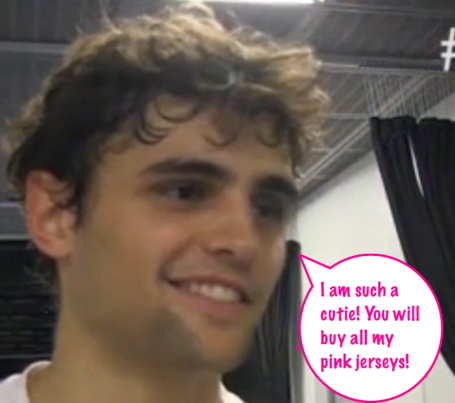 Not only is Raul Neto a good floor general but he can also dunk!

While Raul Neto was being interviewed after the game (as pictured above), you could see Kevin O'Connor and the wonder that is his pale legs talking on the phone in the background.

Who was he talking with, and what were they talking about? 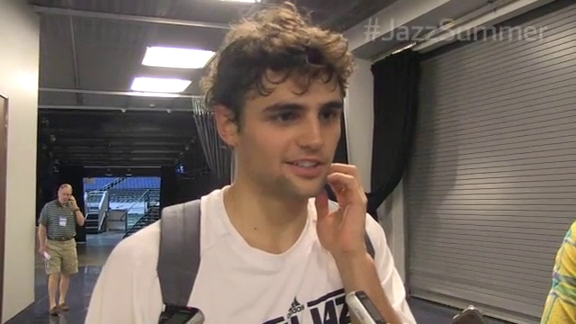 (in my best therapist voice) How does this make you feel?

Randy Rigby mentioned on his weekly interview with the Zone that he is looking to bring back the Rocky Mountain Revue. I love the RMR, I think that would be totally awesome. Randy said they would invite a handful of teams and see if they can get it done. My question is if they plan on inviting a handful of teams why did they end it in the first place. Yes, the kept losing teams to the Las Vegas Summer League but if you are bringing it back why end it to begin with?