NBA Draft and Free Agency: How the Jazz absolutely owned a few teams on their rebuild

Share All sharing options for: NBA Draft and Free Agency: How the Jazz absolutely owned a few teams on their rebuild

Okay fans, let's get something straight. The Utah Jazz may win 20 games next year, or they may win 40 games next year. Just looking at this off-season alone, both Free agency and trade season are not over yet. The team has money to spend, and a front office willing to wheel and deal. That said, looking at the long play -- the Jazz have set themselves up quite well as a small market team during this rebuilding phase. I've said it before, and honestly I will probably say it many times again in the future, but you can only get a star through free agency, trades, or the draft. A small market team in a market that is less desirable than, say, South beach, is at further limitations because you can only really get good guys in the draft, or by luck, in trades.

Let's look at the Jazz and see just how they've done -- and which teams they have taken advantage of to get here: the Sacramento Kings, Houston Rockets, Dallas Mavericks, Portland Trail Blazers, Detroit Pistons, Brooklyn Nets (when they were in New Jersey), Atlanta Hawks, and most recently, the Minnesota Timberwolves.

I know that's hard to follow, so I also made / updated my chart. 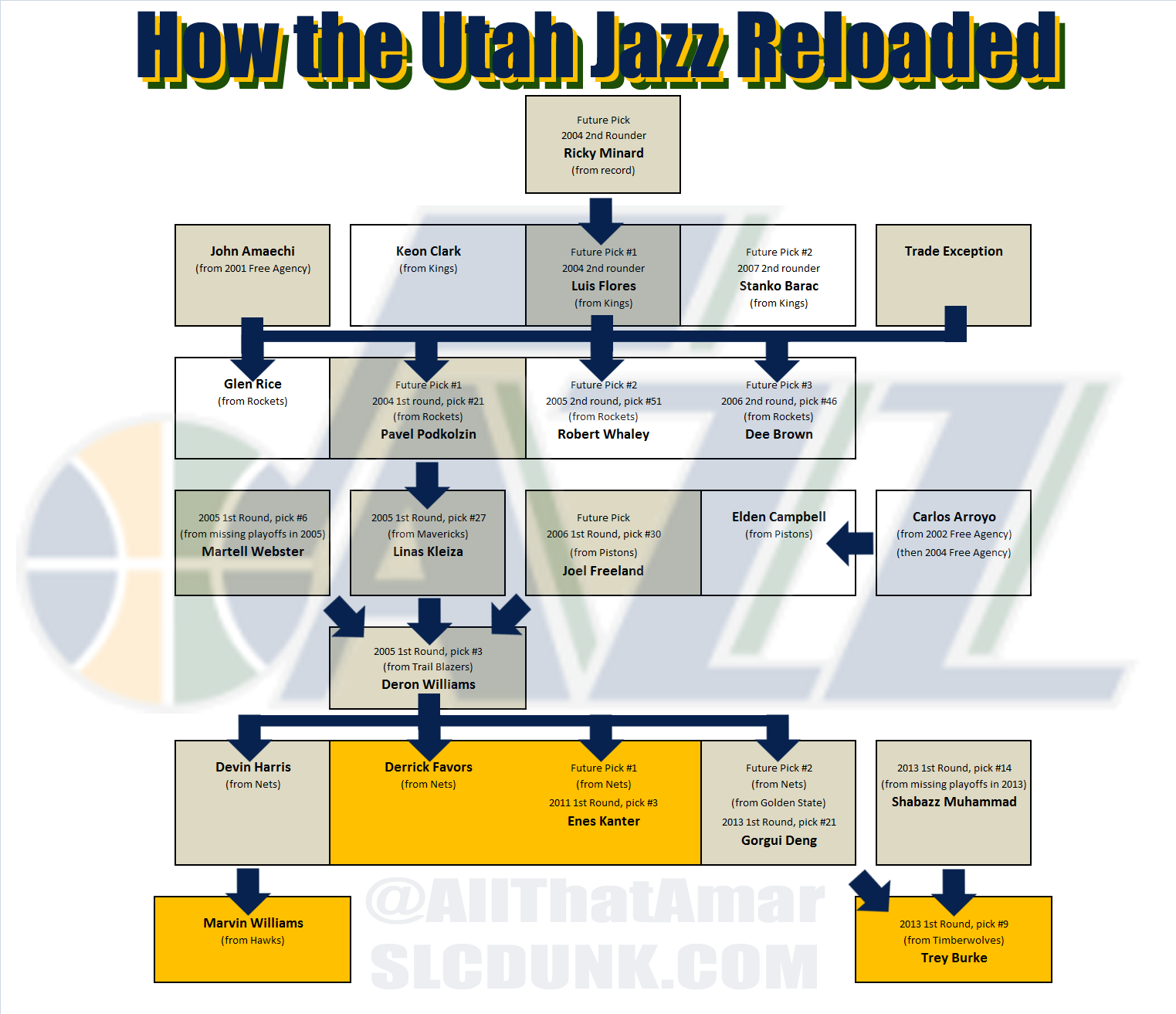 This chart doesn't include the guys we got via just the draft (and not trades): Gordon Hayward and Alec Burks. Hayward and Favors are in the Team USA pipeline and will be giving up parts of their second off-season in a row to work with them. Kanter and Burks look to turn a lot of heads this season. And Burke could be the player with national appeal and star quality that will bring it all together. We also finished draft night with not only the biggest point guard prize, but also by adding Rudy Gobert (who spends part of his off-season as the Alps) and Raul Neto (who at times during summer league looked better than the guy who Vegas gave the best odds to win Rookie of the Year).

And we just traded for a boatload of more draft picks.

So next season may be rough in the win/loss department . . . but we're going to eventually win the war. Other teams will be rocking themselves in the corner with their petty regular season wins from seasons past when our guys will be at their peaks.