The Downbeat #1095: The Career Anxiety Edition

I'm starting a new school year today. I'm in a new grade (5th) and at a new school. So I'm feeling anxious as I anticipate the students arriving next week. And with that, I kind of feel for Ty Corbin as he anticipates a year with few certainties.

Share All sharing options for: The Downbeat #1095: The Career Anxiety Edition

I believe that this is going to be one of the most unpredictable Jazz teams ever. In the Deron years, you could always count on 50-55 wins (barring injury). In the Stockton/Malone years it was similar: 50-55 early, 55-60 later.

But this year ... man. Four probable starters are being promoted from the bench, and the fifth is a rookie. How can anyone possibly predict this.

That said, everyone feels compelled to of course. I'm collecting every prediction I can find right now, and I will continue to do so until the season starts. I really want to know what consensus there is about the Jazz among the anointed prognisticators (if any) and compare that to what the Jazz actually accomplish. Here's one of the first:

From HoopsWorld. They predict the Jazz are 15th in the West.

If you ever miss a significant interview on 1280, or you just would rather read it than listen to it, you need to check up Moni's blog ... she transcribes them, verbal tics and all. In yesterday's interview with Randy Rigby, he dropped a bit of interesting information about Ty Corbin:

How does Tyrone Corbin feel about the Jazz going young?As Ty visited with us, he expressed some concern, from his perspective, and rightfully so.

I think that this is a concern for almost all coaches in the NBA. How many times are high-profile coaches willing to go through a rebuilding process? Think of Phil Jackson's hasty exits when his teams are no longer championship contenders. Think of Doc Rivers bolting to the Clippers because the Celtics are rebooting.

Jerry Sloan's willingness to coach the 2003-04 Jazz team is, I think, unique. And it took a unique combination of character from the coach, unwavering support from the front office, and security that came from nearly 20 years of winning teams.

I understand why Ty Corbin may be anxious, as a young coach. His coaching career at this point is much more tenuous than an established ones — and even established ones are wary of young, rebuilding teams. A lousy record in his first coaching stint could break his career before it really begins.

My hope is that things work out and the young guys turn out to be good.

The Utah Jazz fan community is a really fun, and wonderfully international one. One of them is Japanese artist Mizuho Nishio. Here's how he welcomed new Jazzman Brandon Rush to the team: 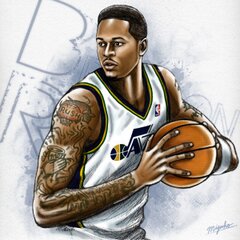 There's obviously Raul Neto still in play. Here's a list of currently available free agents. Who would you like to see?

As has been pointed out many, many times (including in my ongoing "So much depends upon" series ... Hayward is next by the way), if the Jazz are more than a bottom-feeder this year at least one of the F5 has to break out as a star.

Your reasons can be any (most fun, most important spot for the team, highest ceiling, etc.). But who do you hope emerges as the star of the team?