According to Jody Genessy, Raul Neto will not be playing with the Utah Jazz next season. Full Article

Go to the NBA is a dream I want to accomplish. I think we took the first step, but it is something that cannot be in a hurry," Neto said, according to a Portuguese-to-English Google translation from a Basketeria.com.br report. "I have to wait for the right moment."

I don't have a problem with this decision, he knows that he may not get a lot of playing time. I don't like the idea of having two rookie point guards running the team, but let's be honest, does it really matter? I would put Neto as the back up and at least let him get 12-18 minutes a night against better talent. Limited minutes in the NBA are better than full time minutes with Lagun Aro GBS IMHO.

Fellow SB Nation Site Canishoopus.com wrote a great article about what the Utah Jazz did and are trying to do. The article is very well written, and the comments from both Utah Jazz fans and Minnesota Timberwolves fans are fair and realistic . See Below.

I go back and forth. They basically decided to take on salary for a year to get another 2014 draft pick, instead of bringing Millsap back on a multi-year deal.

I might have gone the other way and brought back Millsap on the theory that he’ll probably be better over the next 5 years then whoever they pick with the GS selection, though obviously more expensive. That also would have led to more wins, devaluing their own 2014 pick, so that’s another down side.

I don’t hate what they did. Problem is if neither Favors nor Kanter really emerges as a star.

.It pains me to admit that with a few lucky bounces the future of these Jazz looks promising.

I think it’s high time the NBA draft fixers do the right thing and put this Wiggins thing into the Eastern Conference. Atlanta would seem to be a nice benign landing spot.

.I have loved a lot of Utah’s moves the past few years (since the Deron exodus). I cannot get behind letting Millsap walk, but everything else has seemed really well managed… so maybe they deserve the benefit of the doubt on the Millsap issue. Still, Millsap may be the best deal of the summer, so it is tough to justify. They had better see a ton in Kanter and Favors, which I guess is realistic.

We talk about Wiggins, but I imagine the guy they really want is Jabari Parker. A superstar Mormon will put butts in seats.

Does Gordon Hayward need to work on his 15-20 foot jump shot, or just stop taking the long two all together. This visual is from Hot Shot Charts. This is similar to other shot charts, but the data is for specific spots not zones. When you get to the website you can scroll over any dot and see his shooting history. This is also available for home/road splits. The cool thing about this chart is you can see how GH moves with out the ball. He loves the right baseline three which would have been the weak side when Al had the ball, so he was benefitting from bad rotations. And he loves the three ball from the 5 and 7 spots if you are looking at the basket as 12 o'clock. This is also a spot where he would feed the entry pass, wait for the double team, big man kicks back, he hits the three. Enjoy. 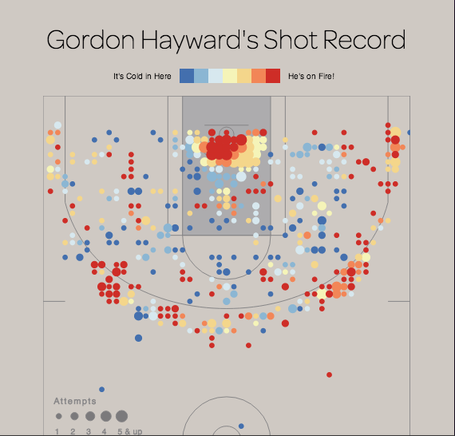 .@jimmerfredette Who do you think would win in a fight: The Piano Guys or the cast of Napoleon Dynamite? (Only weapons allowed: violin bows)

.@derekfisher No one knows about my outdoor movie party tonight. Gonna watch the James Bond flick "Lie Another Day." Shoulda put out fLiars!

Speaking of troll. I know this is not the real Gordon Hayward. This is how difficult finding Utah Jazz stuff in the summer is.