Share All sharing options for: Just How Bad Could The 2013-2014 Utah Jazz Possibly Be?

Recently HoopsWorld ranked the top 15 teams in the Western Conference from best to worst. In this unofficial poll the Utah Jazz were picked 15th. Dead last.

The Jazz are all about lottery 2014. The chase will be for lottery balls, not a playoff seeding. Utah has talent like Derrick Favors, Enes Kanter, Gordon Hayward and rookies Trey Burke and Rudy Gobert. Adding in Andrew Wiggins would quickly change the franchise for the next decade.

Could the Jazz really be this bad next year? I decided to crunch some numbers and find out how bad the Utah Jazz could possibly be. I mean, they can't suck be that bad right? RIGHT??? 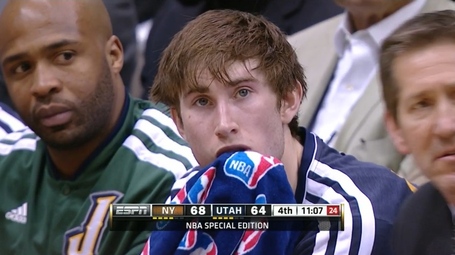 Recently, Basketball Reference released their PER 36 projections for almost every player in the NBA for the 2013-2014 season. Which is awesome. But I said almost. They did not release their projections for rookies in 2013-2014. This is a problem if the Jazz are tanking going to be playing them heavy minutes. Luckily Rudy Gobert has PER 40 numbers from when he played in a professional league in Europe. I know it is not the NBA but it is a professional league.

Unfortunately for Trey Burke, he played in a collegiate league last year. So translating his PER 40 numbers from college into our projections wouldn't be the best idea. So ... I went digging for archetypes. I looked for a point guard's stats that Burke could realistically match in his rookie season. I looked for a point guard who played a lot of minutes his rookie year. Any rookie point guard that played low minutes wouldn't suffice because we know the Jazz signed John Lucas III to prevent Tyrone Corbin from benching Burke to back up Burke and provide veteran leadership to him as he plays extended minutes. The person I selected was Kemba Walker. Now before you start bemoaning in the comment section that this is all null and void, remember, this is educating guessing. I'm sure you can select any host of point guards who could accurately depict Trey Burke's rookie season. So for the sake of this argument I used Kemba Walker's PER 36 as a rookie. Deal with it.

I then split up the numbers accordingly. I anticipated the starting 5 to all play 30+ minutes because the Jazz are tanking and the bench is a roaring dumpster fire developing young talent and the bench is weak.

In the projections I allowed Gordon Hayward to lead all players in minutes with 37. That may sound high, but with such a weak bench that will become the norm for him. I gave Trey Burke an average of 30 minutes per game. With John Lucas III that per game average should be even higher but there is one variable I cannot control, the Tyrone Corbin factor. I honestly think Trey will be sat for some inexplicable reasons this year. Honestly, he will have to be sometimes. A young player has to get better learn not to make mistakes so even though John Lucas III is the alternative I do not see Trey Burke eclipsing 30+ minutes a game.

As far as the rest of the minutes, there is nothing out of the ordinary. The projections may vary by a minute more or less but, honestly, not enough to make big impacts on these projections. The only big change could come from Kanter, Favors, and Gobert getting into foul trouble, thus, forcing Andris Biedrins to come onto the floor. If that happens the team advanced projections really take a hit but that will be illustrated later.

From the Projected Per Game Averages we see: 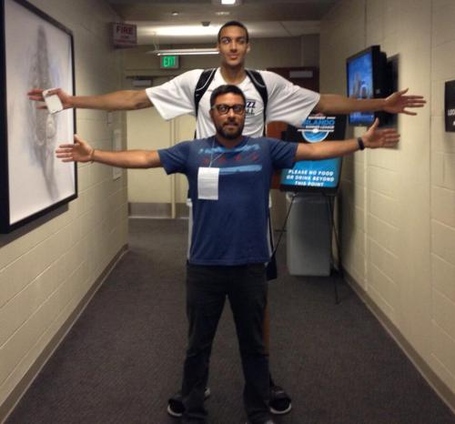 This seems as good a time as ever to acknowledge the obvious variables in the numbers before I continue on. The stats I will go into will have a deep reliance on either past performance that was concentrated in very limited minutes and estimated numbers because of no prior professional performance. There is also this: 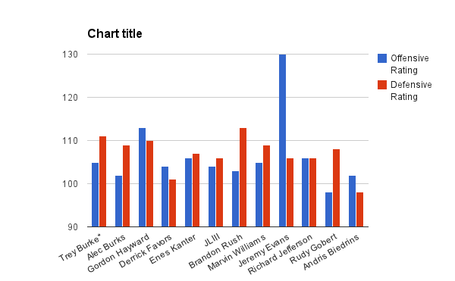 JEREMY EVANS Y U DO THIS TO DATA???

In short Jeremy Evans is throwing off the data. I think. If he continues to be effective like that then he could be special. But as of now he's a small sample size blip and not enough to warrant accounting for on a big scale. Moving on.

"What if I told you a team full of young players would become a defensive monster that takes over the league?"

"What if I told you that a starting 5 comprised of 4 players that have never started for an entire season could win 39 games?"

"What if I told you the Jazz weren't tanking? They were releasing a force the league wasn't ready for?"

Let's go to the data!

This was surprising. I was sure that the Jazz would have a bad team next year. So much, in fact, that my early prediction was for the Jazz to win only 25 games. If the Jazz win 38 games next year then the additional draft picks gained through the Golden State trade will be that more valuable.

But winning 38 games brings another caveat to this whole equation.

If the Jazz with the roster they are trotting out win 38 games then why did the Jazz refuse to follow through with the rebuild two years ago. Why, if 38 wins was reachable and capable, did they postpone the full rebuilding effort? While the result is well meaning and great it could haunt the Jazz in years to come.

Beyond the projected 38.4 wins is the variables. Nothing is perfect. The variables that can shatter this win projection are:

But 38 wins is an awesome projection even with all of the variables. But there is a catch. There's always a catch, right?

[AUTHOR'S NOTE: Remember how I said Jeremy Evans messes everything up? THAT'S BECAUSE HE DOES. Jeremy Evans projects to have a better point differential than Alec Burks, Gordon Hayward, Derrick Favors, and Enes Kanter combined. COMBINED. It took all the integrity of my soul not to just throw his pogo jumping butt out of this assessment. But I didn't. Why? Because I care. BECAUSE I HAVE INTEGRITY. Actually, I don't want a mutiny in the comment section. But let it be known that it throws off worthwhile projections. How do I know that? Because if one takes Jeremy Evans and regresses him to the eventual mean that he will be at offensively, about 110 Offensive Rating which is being VERY GENEROUS, the Jazz go from -1.1 point differential next year to -2.2. Jeremy Evans is a tool sent from basketball hell to ruin stats.]

In this I adjusted the each Jazz player's offensive and defensive efficiency to their pace of last year which was 90.9 possessions a game. I do realize the Jazz should play at a faster tempo. But until that becomes a reality on the court I will adjust for a slower pace of play. Last year Tyrone Corbin said the Jazz would run and get into their sets with urgency. That did not occur. In other words, I'll believe it when I see it. Until then, I will not adjust for a faster pace of play.

I then took each player's offensive and defense ratings and created a ratio for each player according to minute distribution. Because obviously every player isn't at the game at the same time for the same amount of time. I felt this would even the bar and help fix the HOLY CRAP JEREMY EVANS STOP EFFING EVERYTHING UP the Jeremy Evans factor or minimize it.

The numbers actually surprised me. I expected to see numbers indicative of a 20-25 win team. Instead I saw numbers that actually show this team will be really competitive in most of their games that they play. They will not win the majority of them but a -1.1 to -2.5 point differential in games is not a large margin. That is promising. But the lack of data is scary. Without having more data on Trey Burke it will be hard to get a pulse on the engine that will be driving this Utah Jazz offense. Jazz fans have witnessed first hand how discombobulated the Jazz offense can look with an unstable point guard hand at the wheel.

If I were to give my prediction I would have to say the Jazz win 33 games this year. Most of all I think this will be one of the most fun to watch Jazz teams the Miller family has put on the court in a long time. They are athletic, young, and hungry to prove themselves. While there most likely won't be any banners being hung in the rafters this year, let's enjoy this year. This team will tank surprise us either way.