No doubt you've heard about John Lucas III, who was signed today and had media availability. (For more on that visit the DesNews, SLTrib, or Salt City Hoops for that news-y stuff) As a dynamic website we've gone ahead and tried to fit all our pieces together into a puzzle. I do feel like the Utah Jazz will still come around and sign Jerel McNeal to be our #3 point guard and take our team to a 13 man roster. Part of my reason is that McNeal has been mentioned by our GM and Exec GM all off-season long, he finished our last season on the roster (signed for the rest of the season, and didn't just let his 10 day contracts expire like they did with Kyle Weaver), and was on our summer league team.

Anyway, putting the pieces together for a game seemed like a fun enough exercise. Our youth is centralized around Derrick Favors, Gordon Hayward, Enes Kanter, Alec Burks, and new comers Trey Burke and Rudy Gobert. We've added players from other teams like JLIII, Brandon Rush, Richard Jefferson, and Andris Biedrins. Furthermore, we have a return from Marvin Williams and our dearly beloved Jeremy Evans.

I decided to try to fit these pieces together into a 48 minute game. Over 5 positions on the court that translates to 240 minutes to distribute. Funnily, I also checked out all of the games and minutes played by each of these players over the last three seasons, cumulative. And would you believe that if you add it all up those averages per player sum to 243.5 minutes. So that's only +3.5 more than possible. (N.B. this is a straight translation of all available data, so Burke's minutes come from his two seasons in the NCAA, and Gobert's minutes come from his two seasons in Europe) So, if we were crazy enough, we could just play everyone their average minutes from the last three seasons, and basically give everyone time for every game.

And as this is my FIRST attempt at this, I weighed it towards the development of the players I think are most important to the team going forward. I'm sure after agents have their talks with Tyrone Corbin that things will change. That all said, on my first attempt, I think this is pretty fair compared to the averages of these players over the last three seasons -- with an eye towards placating our youth first. 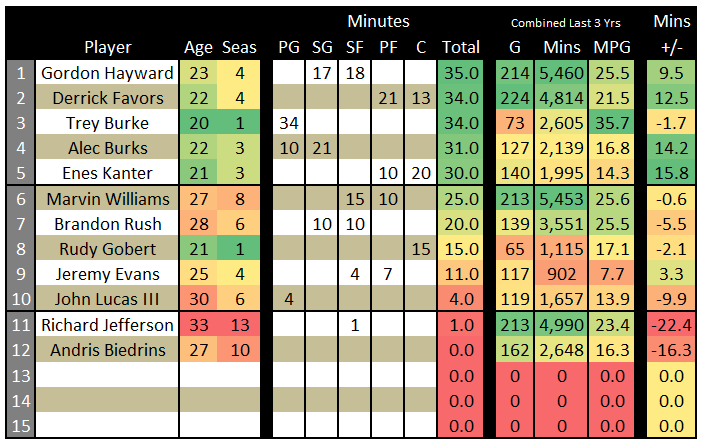 If we are looking at the target of 2,000 minutes for a younger player's development:

Honestly, you could switch Marvin and Brandon's minutes depending on who is doing better. I don't care much for Dick and Andris, and I hope they understand. The major gripe could be from Lucas, whom I put in (with this 12 man rotation) as the #3 PG -- because I'd rather have Burks in there for his defensive talents to compensate for Burke and/or Lucas' small height and defensive liabilities. In fact, in most cases, I could see Alec being the closer at the PG spot. I guess this is when the Jazz owned media starts telling us that "Alec may actually BE a point guard after all."

Anyway, tell me how I messed this up. Who did I play too many minutes? Who am I shafting? How would you change things up?

As a bonus feature, here are my 5 most interesting lineups (so far):

What are your most interesting line-up possibilities?