The Downbeat #1101: The Back to School Edition

Karl Malone Day, Ian Clark and the Jazz bench, USA Men's Select Team, and Back to School goals. It's all here in today's Downbeat. It's today's Downbeat (and for some reason seems important to note the number of the DB is also binary for 11)

Share All sharing options for: The Downbeat #1101: The Back to School Edition

Utah celebrated Pioneer Day yesterday. Jazzdom celebrated Karl Malone Day in honor of the Mailman's 50th Birthday. The two, of course, are tied together forever (from a Deseret News article about Karl Malone's retirement in 2003)*:

The Karl Malone era for the Utah Jazz began in 1985 when the "city of Utah" threw a birthday parade for him, disguised as a Days of '47 celebration.

Our own Basketball John (@5kl) was at Karl's car dealership, tweeting to the world the inside scoop:

Karl is serving his employees a lunch for his birthday. A full pig.

Learned that Favors and Kanter will be heading down to Louisiana to continue training with Malone next weekend "away from media."

Karl spoke to this 94 year old Jazz fan for at least 20 minutes. http://t.co/Qxtv6zhZCb

And the one and only Mizuho Nishio did what he does best: let Jazzmen new and old know exactly how much we fans enjoy them:

As Clark (our SLC Dunk writer) said about Clark (the 22-year-old SG): we now have a Finals MVP on the team!

Exactly one week ago, I asked you all to list any remaining Free Agents that you would like the Jazz to find for the 13th spot on the roster. I don't think anyone thought of Ian Clark ... and today, I expect most of us are a bit excited about this move. It's about as close to a "Slam Dunk 13th Man on the Team" signing as you can get.

He certainly shot the lights out in college last year (54% FG, 46% from three — as a SG!). Who knows if it will translate to his NBA career, but I think we're all excited to see what he can do. Considering Brandon Rush is returning from a ruptured ACL injury, I think Clark will have at least a few opportunities to prove whether he can make it as an NBA player.

A great opportunity for him.

Ian Clark joining the team has got me looking a lot at the likely bench this year. At first glance, it has seemed really weak. But the more I look, the more I find myself feeling optimistic that there are at least a couple high-quality guys there.

I mentioned Clark's terrific shooting in college. He was also his conference defensive player of the year. Brandon Rush was a strong defender and rebounder, and his scoring became crazy-efficient his last full season. Jeremy Evans, of course, exists primarily to screw up all stats. He's shot over 60% every season. With the requisite "sample size alert", in his limited time he has rebounded well, blocked shots, and gotten steals. Rudy Gobert may be a year or two away from having an offensive game that doesn't scare coaches ... but he will have a noticeable defensive impact every minute he plays.

The odds are long that everybody works out and proves to be an effective player ... but the more I look, the more I think at least one or two of these guys prove to be keepers.

But we all know I'm bleeding optimism about this season.

Of course, there's been a lot of talk about our guys and how they're impressing—particularly Hayward. From Sekou Smith's Hang Time Blog:

Hayward’s looked more like the college star he was at Butler during his time here this week than he has the role player he was asked to be in his first three seasons in the league. His ballhandling, slashing and athleticism have been on full display. He’s more than held his own on defense, too, sticking out in this talented crowd on both ends regularly.

"That’s what you love about things like this," said Favors, who will team up with Hayward on the Blue team in Thursday night’s intrasquad showcase at UNLV’s Thomas & Mack Center. "I know how good he is. I’ve seen him do this stuff in practice every day. But it’s been funny to talk to some of these other guys and see how impressed they are with Gordon this week."

In the spirit of this, I present you some "that's so Derrick Favors" quotes about being a leader this upcoming season (from Jody Genessey's Twitter):

Derrick Favors smiled while talking about Tuesday's dunk and spinning post move: "There’s a lot of stuff I can do. I’m multi-talented, man."

Derrick Favors on the Jazz losing top scorers Al Jefferson and Paul Millsap: "It’s time for two other people to be the new leading scorers."

If you think "he's multi-talented, man." is going to be my new Game Thread meme whenever Favors does something freaking awesome, you are 100% correct. But there will also be plenty of "There's lots of stuff he can do." and "two other people can be leading scorers." in the threads. I'm so ready to pull out that last one when the team scores 125 points in a blowout win.

And please note the periods. Any Derrick Favors meme has to end in a period. The more amazing the athletic feat, the more important the period. Exclamation marks totally betray the soul behind our PF/C.

And finally, Jody explains why exactly the Jazz may not be terrible:

@joshcannwrites Here's the point you might be missing: Gordon and Derrick want to play (and will) and think they can help the Jazz win now.

Whether Hayward and Derrick become superstars, stars, or simply effective players remains to be seen. But right now they believe in themselves, and so do I.

My school is changing to a year-round schedule this year, so for me the first day of school is today. By the time many of you read this, I will likely have already given out my first "stop talking and pay attention NOW" look of the year.

Anyway, it has me thinking about our guys on the team today, and what I'd love to see them learn this year. Not a skill I'd like to see them perfect or work on, but something brand new to bring to the team. Here's my list:

Derrick Favors — How to wear a sweet afro. Seriously, is there anything in the universe that could beat this look? 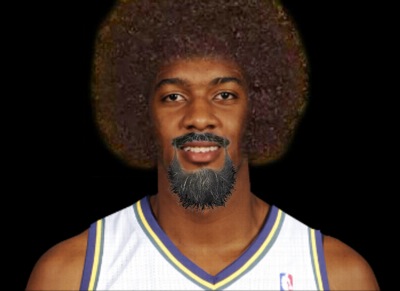 Enes Kanter — A Tim Duncan bank shot (preferably without holding the ball for 10 seconds first ... seriously, work on that Kanter).

Alec Burks — A Tinsley-esque nutmeg. Just imagine him pulling it off, then one of his crazy, acrobatic and-one's, all with his trademark non-chalance and "whatever, I do that all the time" attitude.

Marvin Williams — Any signature something that makes his presence known when he's in the game.

*To anyone who tries to correct me and claim that Malone didn't retire in 2003, you are simply wrong. He retired when he left the Jazz. The End.