Share All sharing options for: The Downbeat #1102 Problem Finding and Problem Solving

Cognitive Biases and NBA Basketball/Movies/MMA from the Utah Jazz Doctor.

In residency I was taught to always be aware of my own biases. A well received paper on cognitive biases talked all about cautioning against heuristics. "Heuristic" means using personal experience to short cut the problem solving process. Heuristics are known to often lead to suboptimal solutions because objectivity is lost. The aforementioned publication talked of heuristic tendencies that trap E.R. physicians, and warned against awesomely named biases such as Ascertainment Bias, Visceral Bias, Sutton’s Slip, Overconfidence Bias, Diagnosis Momentum, Fundamental Attribution Error

This is a fantastic read that led me to another thought about problem finding and problem solving. I really don't know the answer... that is why I am asking the question. Is Ty Corbin a problem finder or a problem solver. Mind you, these are two greatly different responsibilities/ skills. When I look at possible heuristic decisions (specifically in game decisions) I wonder if Ty Corbin is trying to solve a problem that he has already identified, or if he is trying to identify the problem itself, other times I don't know if either is happening. I think that time helps with both of those processes. I also think that great coaches are given the time to not only identify the problem, but also to solve the problem. Time will tell.

According to NBA.com, the schedule will be released today on NBATV. I know that some of you are like eh... the schedule. However, we are guaranteed at least one National Television game against the Pistons right? I am also excited for the schedule release, because for the first time...I will be planning for Utah Jazz road games. Not a poll question, but how many times have you seen the Utah Jazz play outside the state of Utah?

Karl Malone the AARP, and Happy Birthday from the John Stockton Family. Must Click Link. Via Moni 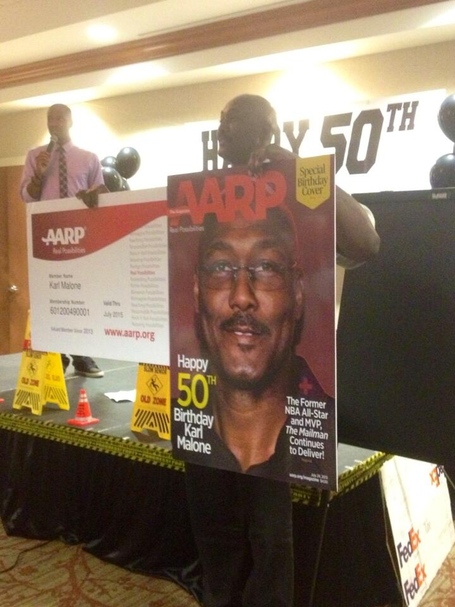