The Downbeat: Have You Accepted Trey As Your Personal Point Guard? Edition

Trey may have created some doubts during Summer League but let's zoom back to why Jazz fans lost their collective minds when Utah selected him #9 overall.

Share All sharing options for: The Downbeat: Have You Accepted Trey As Your Personal Point Guard? Edition

Trey Burke recently was on POWER 107.5 in Columbus Ohio. Here is the transcript of his segment.

SP Da Cool Kid: Trey, have you ever been to Utah before you got drafted there? Trey: Never. Never at all. Actually my first time going out to Utah was the press conference after the draft. It was a nice city, tho, that's one thing I can say after my first time out there. It was about 103 degrees over there. So-- Cool Kid: Really?! Utah?! Trey: I know it gets cold in the winter but right now-- Sullinger: Get your snow boots ready.

Cool Kid: I'm going to ask you a tough question. Summer League. You got a lot of critics because of your summer league, right now. You feel like you got something to prove? Trey: Absolutely. I feel like I always got something to prove. But like you said, summer league. I think that was a time to get adjusted to that new system and get adjusted to the whole culture of the Utah Jazz. Then again, I wasn't playing with my real teammates. So … I think it was definitely a wakeup call for me as well. Continuing to work hard and stay in that gym. I definitely think I got a lot to prove and I've done it before so I'm looking forward to doing it again. Cool Kid: Okay, let me say this. Rookie of the year. Trey Burke. What would you say to that? Burke: Absolutely. I've always been the type to set goals for myself. Not only for myself but for my team. But, um… I definitely think it is a possibility. I think playing for Utah that is a great situation for me to come right in and earn that starting spot and help the team win. So I think it is possible. Cool Kid: Do y'all ever see yourself playing together? (directed at Sullinger and Burke) Burke: I think so. I think it could definitely happen. We'll see. Right now he in Boston, I'm in Utah. We goin' be playing against each together for the next couple years. Who knows? God works in mysterious ways. We here together now, we grew up together. Who knows if it happens? Sullinger: Only way that happens is if he comes to Boston cuz I'm not going to Utah.

It is refreshing that Trey Burke took it as a wake up call. Especially since there were other non-heralded guys who stepped up and played extremely well.

It's great that we can put this interview into context now. Trey has a very down to earth mentality. He's a very sober guy. By that I mean he lives for the next day. He's goal oriented and a hard worker. The more I get to know about this young man the more I am impressed with his vision. He's a team oriented guy who wants the best possible outcome for the team even if that means he's not "the man". 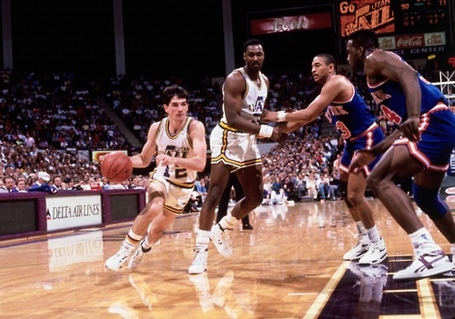 It should not be seen as a common coincidence that John Stockton scouted every point guard prospect for the Utah Jazz this season and Karl Malone is now working with every Power Forward/Center on the Jazz roster now. The Jazz have a bonafide pick and roll assassin in Trey Burke.

Trey Burke was compared to a few point guards in the Grantland video. Those were Chris Paul (ceiling), Mike Conley with a better jumpshot (probable), and Sebastian Telfair (basement). All were highly touted coming out of college. It is interesting that Bill Simmons makes the Telfair comparison because Sebastian had trouble finishing in the paint. As most Jazz fans are brutally aware Trey Burke had a really hard time finishing in the paint during summer league. No one is worried about his jumpshot. That will improve. It was his finishing ability. For the pick and roll to be effective with Favors/Kanter/Gobert/Anybody, Burke has to be a threat to penetrate inside and finish (I know, Moni, UDQM). So just for fun's sake I looked up these three comparisons' rookie numbers. Here goes.

Pretty wide margin. The most important thing that Trey Burke can do is learn how to finish in the paint. The outside shooting we know will come sooner or later, but it Trey Burke struggles against larger defenders in the NBA it doesn't bode well.

The cool-headed, swaggering point guard that led Michigan to the NCAA championship game was nowhere to be found out in Las Vegas.

Which is fully deserved. Trey Burke did not show up in Las Vegas. What an underachiever. Trey, just because your team was scheduled to play in Orlando NOT Las Vegas does not give you an excuse to not show up for a Summer League that you are not supposed to play in nor can play in. Pfft.

It looks like Trey Burke is watching you, Sticky G, as Trey Burke just retweeted this.

Is it wrong of me to be more excited for Ian Clark to come to the jazz than trey Burke ?

I'm so excited for this season. I think Trey Burke is going to come out with a chip on his shoulder the size of Utah. If he does ... he's going to be something special.