The news is dry. You're going to see a DB oozing desperation.

Share All sharing options for: The Downbeat #1107 - The Ode to Trash Man Edition

Here's the latest news via Twitter from some major Jazz Tweeters:

Watching Safe Haven, my wife's Redbox choice. Am I going to be hating life and everything in it in an hour or so?

Give a man a fish and feed him for a day. You're going to have one mega fat fish.

I'll be honest, this would be much more riveting if RonCo Peel were the presenter. Yes, I am witnessing an infomercial live. Ughhhh!

Just got off the phone with a dude who is like my soul mate, but a man. My man-mate. It's not weird. Shut up.

In other words, we are in the dog days of August right now. It's taking some serious creativity to find stuff to put in the DB.

Patrick Minton, a strong devotee to the Wins Produced side of NBA analytics, puts up predictions every year based on the Wins Produced formulas. He recently wrote about the Jazz in his annual "They're going to surprise you" section. Here's a flavor for what he says:

I don't think so. It's possible that management just has no idea what they have, but this is actually still a very good team and would be a lock to make the playoffs in the East.

And you all thought I was the pinnacle of optimism so high it is almost silly.

As I have written before, I am keeping track of all predictions about the Jazz this coming year. I am rather interested in what is predicted and what actually happens.

For all my 5th grade students reading the blog, once the season ends and I have the real results to look at next to the predictions, this will be utilizing the Compare and Contrast reading comprehension strategy.

You can buy this at the Utah Jazz's online store:

It's probably the perfect accessory for that special someone who found this in her stocking last year (from CBS Sports Shop): 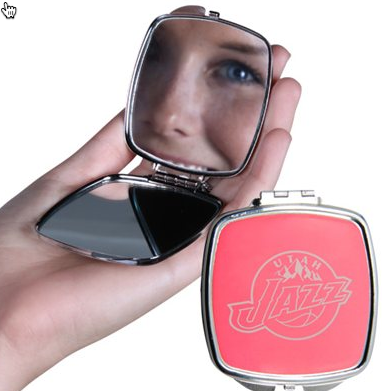 However, I think my dream "Officially Licensed Accessory" has got to be a Utah Jazz ice cream scoop. It will go super great with my five #15 cooking aprons I got for free a couple years ago.

@ProdigyJF (memoismoney) has once again fulfilled his calling and given us the video we must have. Here is Ian Clark's Summer League highlights:

My absolute favorite Sportswriter, without question, is Joe Posnanski. He's primarily a baseball guy. He's also from Cleveland and his hero growing up was the Immortal Duane Kuiper.

Anyway, he's been soliciting and receiving 100-word mini-essays from fellow sports writers that tell who their favorite athletes are and why. I'm going to do a couple with the Jazz — but I'm more interested in the lesser players, the non-stars than the usual suspects. Here's mine:

Adam Keefe had, at once, the coolest and dorkiest nickname of any athlete I can remember: The Trash Man. It wasn't even poetic like "The Human Vacuum Cleaner." He was the original Matt Bonner — but without the three-point shot. He built a 9-year NBA career out of diving for loose balls and making 2 shots per game. By the time he was on the Jazz, I was in high school and had despaired at ever being a basketball star. He gave me hope — if I was willing to just do garbage stuff. It was a false hope — unless you're 6'9"— but hope nonetheless.

Who is your favorite non-star and why? Extra credit for doing it as a villanelle or sestina.