Chad Ford just released his Big Board for 2014.  Even though the Jazz are "not tanking" but "developing", it would prove wise to look at this list and get familiar with these prospects.  This is, in reality, our future for next year. Maybe not Andrew Wiggins or Julius Randle, but there is a very real possibility the Jazz will be drafting one of these young men.  I will be updating these throughout the season as well.  Before we get into the Top Ten of Chad Ford's Big Board this is what Chad Ford said about this upcoming draft year.

The 2014 NBA draft is going to be epic. Our initial 2014 Big Board is one of the most talent-laden I've ever seen. There are as many as five to eight future All-Stars in this group. A number of teams deliberately gutted their rosters this summer to try to get as high as possible in the 2014 lottery. It's going to be big.

This next year will be special.  There is no coincidence with Dennis Lindsey's offseason choices.  They are doubling down on 2014's Draft.  If Lindsey can work his magic like he has done in this offseason next offseason the Jazz will be one of the most formidable young teams in the NBA come 2014-2015.  Get your popcorn ready. 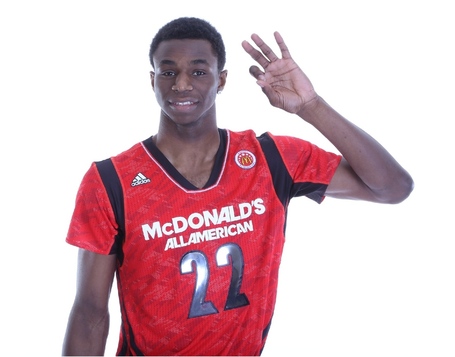 Wiggins begins the year as the consensus No. 1 player on our Big Board. In fact, many scouts believe he's the best young prospect to come into the draft since Kevin Durant. Wiggins is blessed with extreme athleticism. You hear names such as Vince Carter andDominique Wilkins when people talk about his explosive leaping abilities. Wiggins is also a polished scorer who can shoot the 3 and get to the basket. His only weakness is that he appears to lack the same killer instinct that elite wings such as Kobe Bryant possess. But he's young. Wiggins skipped both national team commitments and camps this summer and, instead, enrolled early at KU. Fans might have to be patient as he figures out how to fit into a pretty loaded Jayhawks squad, but he's going to have to stumble pretty badly to fall out of this spot on our Big Board. 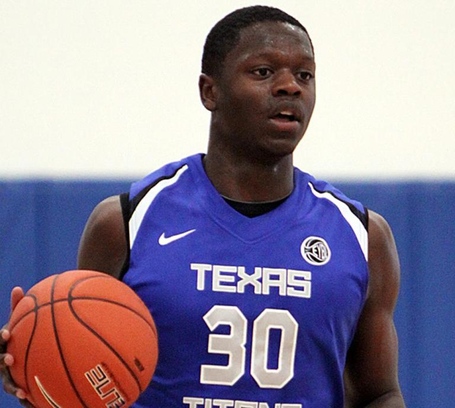 In a normal year, Randle would be the consensus No. 1 player in the draft. He's that good. He has size, strength, athleticism and a well-rounded game; power forwards like Randle don't come along very often. Head coach John Calipari might have to convince Randle to stay in the paint and take fewer 3-pointers. Still, he's expected to anchor a ridiculously talented Kentucky squad this season. Like Wiggins, Randle decided to forgo any summer league play and focus on Kentucky. Despite the talent on the team, scouts expect him to quickly assert himself as the alpha dog. He should provide a serious challenge to Wiggins for the No. 1 pick in the draft. 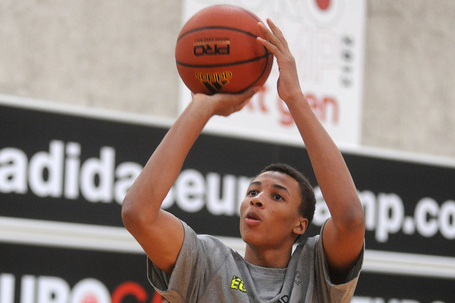 Exum had the biggest summer of any player on the Big Board. He was awesome in the FIBA U-19 championships this summer, averaging 18 PPG and nearly 4.0 APG. A 33-point game against Spain in the quarterfinals and a 28-point game in the bronze-medal game versus Lithuania were highlights. He seems to have the perfect blend of size, athleticism and skill to play either the point or the 2. Add in his rangy defense, and he's a true two-way player. He graduates from high school in December and, technically, if he wanted to he could join an NCAA team for the second half of the season. However, he may not have to. He impressed scouts enough this summer that he seems like a lock to be a top-5 pick if he declares for the draft. He's also a dark horse for the No. 1 pick. 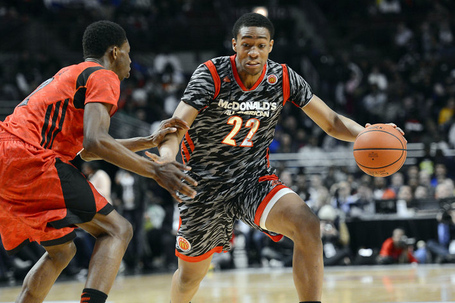 Parker, not Wiggins, is the one who once graced the cover of Sports Illustrated. Two years ago, he would've been the No. 1 guy on the board. But Parker's growth leveled out, scouts began to question his athleticism and upside and that combination has caused him to slide a few spots here. Make no mistake, Parker can play. In fact, he might be the most well-rounded player in this class -- think a better version of the Washington Wizards forward Otto Porter. 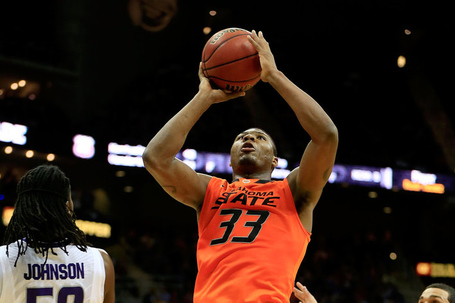 Smart shocked everyone in April when he decided to forgo a likely top-2 selection in the 2013 NBA draft and return to Oklahoma State for his sophomore season. Some saw Smart's decision as bizarre, but to many NBA scouts Smart's choice to return is a testament to his great character. Smart felt he wasn't ready to dominate the NBA. He wanted to improve his jumper, cut down on his turnovers and, most importantly, he wanted to lead the Cowboys to a national championship. Nevertheless, scouts who watched Smart at the FIBA U-19 championships and Team USA minicamp came away wondering if he'll really improve. His jump shot and handle still were pretty shaky and scouts were already picking apart his game. If Smart fixes his weaknesses, he, too, will make a compelling case for the top overall pick -- especially if the team that lands No. 1 needs a point guard. 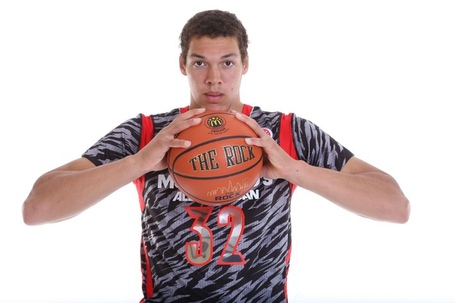 The hardest player to leave out of the top five was Gordon. Why? Gordon looks like a young clone of Los Angeles Clippers forward Blake Griffin. After Wiggins, Gordon might be the most athletic player in the draft, he plays with a huge motor and is very scrappy. Gordon was, arguably, the best player on Team USA's U-19 squad, leading the team in both points per game (12.6) and rebounds (6.3). Gordon's lack of size for his position and a shaky perimeter game are the two things that keep him from being ranked higher. Arizona plans to play him at small forward this season. If he can make the transition, he's going very, very high. 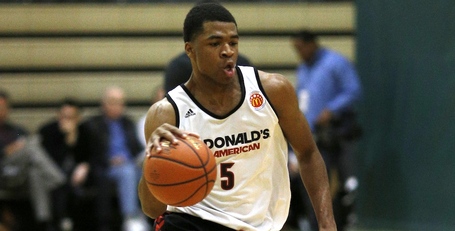 Harrison is the last player in this group that scouts are convinced is a sure-fire All-Star. Blessed with size, athleticism and terrific court vision, Harrison is the prototypical point guard of the future. The only things pushing his ranking down are question marks about his attitude and work ethic. Kentucky head coach John Calipari has a way of righting wrongs, however, and most scouts feel that a season at Kentucky is exactly what Harrison needs to polish up his resume. He should be Smart's top competitor for the top point guard in the draft. 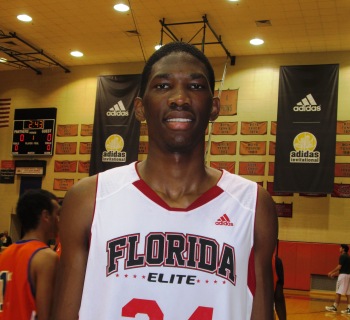 Louisville head coach Rick Pitino is on record as saying Embiid has a chance to be the No. 2 pick in the draft. The scouts I talked to aren't quite ready to go there yet, but they are very, very intrigued. Embiid is the riskiest player in the Top 10, but next to Wiggins, he might have the most long-term potential. Embiid wowed scouts at the McDonald's game and in practices for the Nike Hoop Summit, as well as at adidas Nations. He has rapidly moved up in the rankings. His feel for the game is still a work in progress, but the physical tools are convincing. He has a 7-foot-5 wingspan, is a fluid athlete and is more skilled than one would think. If Bill Self can get him up to speed quickly and get him to play hard all the time, he's the top center prospect in the draft. 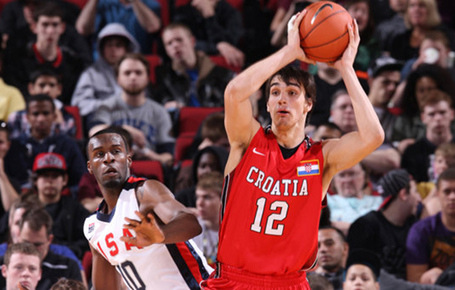 Saric pulled out of the 2013 draft at the withdrawal deadline and opted to return to Croatia for another season despite a promise from an NBA team that he'd be drafted in the lottery. The early thinking was that the move was a mistake because the 2013 draft was weaker than 2014 projects to be. However, many scouts believe another year at Cibona will allow Saric to make his case that he's the best young international player in the world. He started the season off really slowly and ended it strongly, one international scout said. "Next season, if he plays like he did in March and April, he's going to be a top-10 pick. He's just too talented. Saric certainly made his case this summer with the Croatian U-19 national team. He was second in the tournament in scoring at 20.3 PPG, first in rebounds at 11.2 RPG and first in assists at 4.9 APG. That's an impressive feat. For Saric's critics, they'll point out he also led the tournament in turnovers, as well. Still, most scouts walked away from his performance still believing he's a top-10 pick next year. 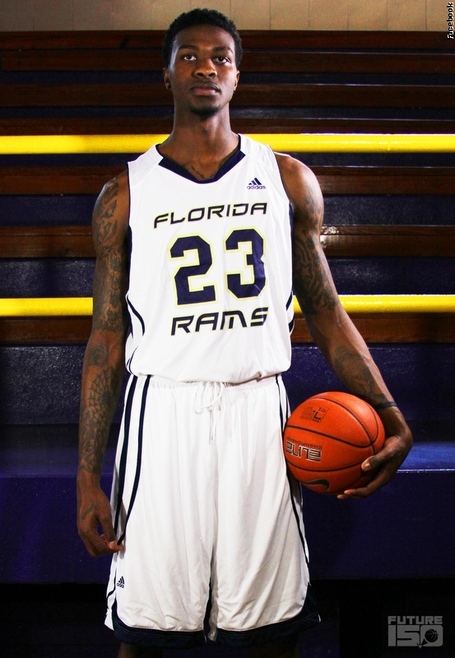 Like Embiid, Walker is an upside player. Blessed with elite athletic abilities and length, the question for him will be whether he can make the transition from the 4 to the 3. If he can get his jump shot falling with regularity (and if he can get cleared academically by the NCAA), he'll be a very attractive pick for teams looking for a Paul George-esque wing.