The Downbeat #1118: The Never Tell Me The Odds Edition

In which we discuss a proposed change to the Draft Lottery, compare the Jazz to another rebuilding team, make anagrams out of Jazz player names, and more.

Share All sharing options for: The Downbeat #1118: The Never Tell Me The Odds Edition

(I was trying to decide between the Star Wars reference in the title above or a similar Hunger Games reference. When in doubt, always go with Han Solo.)

The trouble with tanking rebuilding in the NBA is the odds are never in your favor. (NAILED IT.) You already know this, but unlike other pro sports like the NFL, the Draft Lottery means the very worst teams don't necessarily get the very best picks. At the same time, the system sometimes rewards teams who choose NOT to field competitive teams, while middle-of-the-pack squads get locked into a frustrating stasis of mediocrity.

You're Jazz fans, so I probably didn't need to explain all that. Anyway.

Noted Jazz killer Steve Kerr, writing at NBA.com, isn't happy with this state of affairs and posits a change:

What if a club that battled all season long to make the playoffs but barely came up short actually had better than a 0.5 percent chance of winning the lottery? If the lottery playing field was more closely leveled, would teams be less likely to embark on losing strategies? Would the competition actually get better at the bottom and middle of the league?

You'll want to click through for the full explanation of his changes to the lottery odds. He uses the Jazz as a prime example of a team that should have benefited from making an honest effort to compete.

Does Zach Lowe always write an NBA column at Grantland on Tuesdays? I feel like I'm always referring back to him on my Wednesday morning Downbeats. (I should be grateful, I guess, since he brings up the Jazz so often in his work.)

Anyway, this week Lowe examines the offseason strategy of the Charlotte Bobcats/Hornets, and his commentary on free agent signing Al Jefferson is notable for Jazz fans. Moreover, he compares the Jazz's development strategy to the Bobhorncatnets -- who, I might add in passing, are a prime example of when the unfair odds mentioned in #1 above did NOT help a team improve.

You could argue that Utah is a step or two ahead of Charlotte on a very similar path now, with four very good players on rookie deals but none you could pinpoint as a surefire All-Star. The Jazz certainly hope one of those players, perhaps Favors or Gordon Hayward, turns into a top-20 guy, and they may be in position to draft such a player next June. But if all those avenues to a franchise star fail, Utah is still well positioned to be very competitive in the next half-decade.

Remember, Jazz fans: No matter how bad it gets...Charlotte will probably be worse.

I only have two FanPosts to feature here this week, but they're a couple of doozies. First, Beeblebrox42 has done some solid work in breaking down possible rotations for next season, complete with neatly organized tables:

While I was constructing these I realized how hard it is to always have a decent lineup on the court without playing guys all twelve minutes in a quarter. I tried to limit players to no more than 8 consecutive minutes in a quarter, but then found it hard to make sure we had scorers and defenders on the floor at the same time. It gave me a different perspective on how difficult it must be to do this on the fly during a game while also taking into account how well a guy is playing, how tired a player is, and matchups.

Then Tennessee Dolly knocks one out of the park with...well, I think describing it might spoil it. Just know it involves Jazz players, anagrams, and Snake Plissken:

Many times in the years since have I traversed the path to Zaz's mountain home, making the trek through the wild to partake of the ancient man's wisdom. Unfortunately, on my most recent trip it seemed he had developed a severe tea allergy, and is now forced to do most of his foretelling using crunchy Alpha-Bits cereal.

With this sugary breakfast fare as his primary means of prognostication, I asked him to reveal the fortunes of our beloved Utah Jazz for the upcoming season.

Bill Oram at the Trib has an excellent profile of John Lucas III, which sheds some more light on the point guard's personality, including his reaction to an incident at Baylor in 2003 (which Lucas had absolutely no part in) where one teammate shot another dead.

The profile also mentions the highlight of Lucas' college career, a game-winning 3-pointer to send Oklahoma State into the Final Four in 2004. Here's the full game video -- skip ahead to 1:12:00 for the fireworks:

I'm a big fan of Paul Lukas' Uni Watch blog, devoted to "the obsessive study of athletics aesthetics." Part of the way Lukas supports the blog is by selling Uni Watch "Membership Cards," which include an official signature and a custom design intended to look like a team uniform.

I got my Uni Watch card a few months ago; for my design, I chose the early Stockton-and-Malone era road purples: 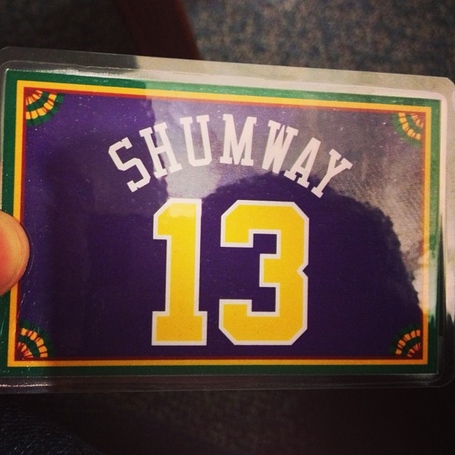 Which Jazz uniform design would you have on your card?