Downbeat #1108 Devils Advocacy and the Truth About "Youth" Movement

Share All sharing options for: Downbeat #1108 Devils Advocacy and the Truth About "Youth" Movement

A lot has been said about how young the Utah Jazz are. How young are they really? According to HispanosNBA I know the link sounds crazy, but the team info has been updated with John Lucas III. So, minus the signing of Ian Clark the Utah Jazz are the fourth youngest team in the NBA with an the average player age of 24.8 (tied with Cleveland). Our players average experience is 3.7 years also tied for fourth least in the NBA. In comparison, the Heat's experience average is (9.2) nearly two and half times the experience of the Utah Jazz. The average age of Nba players is 26. What does this all mean? Typically, less experience means more mistakes, and less in game opportunities. Which is exactly what we expect from this team i.e. mistakes and poor decisions at times. They will grow together as the season goes on. 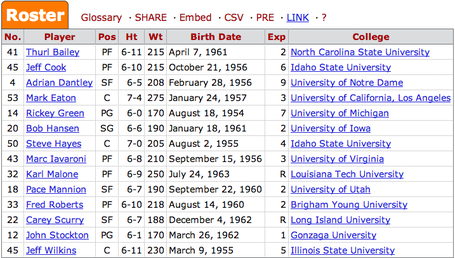 I have had this in my Alerts for a while. I don't know if it has ever been shared on the Dunk. Trey Burke's Young Hollywood interview.

A Yes Man. We all know who they are. We work with them, we work for them, we are their bosses. A yes man is someone who agrees to everything silently in meetings and then as soon as the doors open he/she starts to belittle the leadership, or to disagree with the plans that have been made. They don't disagree publicly, but disagree in the shadows, ruining the organization from the inside. Like moles they work from the inside out.

A No Man. A No Man doesn't hide, and his/her intentions are very clear. Their way is the most important way to get things done. They do not hide, and in fact are very clear in their intent, which generally is to have the entire organization follow their lead. (See MJ and the Bobcats)

A Devils Advocate. This is a man/woman who has the best interest of the organization in every thought. A Devils Advocate does not do what he does to bring the company/classroom down, but to have the company look at things in a new/different way. When we had Socratic discussions in my classroom, I would ask questions not to prove students wrong or to say that I was right, but to help look at things in a new and different way. My end goal is/was always to have student's improve and add to their current way of thinking.

I think Dennis Lyndsey is helping the Utah Jazz, the players, the coach, and the fan base look at things in a different way. It is not the right or wrong way, just a different way. In the above paper, it states that a Devil's Advocate is vital in critical decision making. I think Dennis Lyndsey may have brought this type of decision making to the Utah Jazz organization. This all made sense in my head...