The Downbeat #1130: The Core-vengers Edition

In which we ignore the lack of Jazz news in favor of pure nerdiness.

Share All sharing options for: The Downbeat #1130: The Core-vengers Edition

Look. There's like, zero Jazz news happening right now. Less than zero. Even my ace in the hole, Zach Lowe, has gone an entire week without mentioning the Jazz in a column. (Actually, he did make a very small reference to the Jazz's trade of Deron Williams in his Tuesday piece on the Blazers...but I can't make a whole Downbeat out of that.)

My first choice probably won't surprise you: Gordon Hayward is Captain America. Like Steve Rogers, Hayward's Boy Scout appearance belies a fierce competitive spirit, an indomitable will, and strength and speed to match any superhuman. Cap's classic shield blocks projectiles the same way that Hayward's chase-down defense blocks shots, and they both have deadly aim. Finally, they're both strategic geniuses...even if Hayward's battlefield of choice is Starcraft II or League of Legends.

Alec Burks is Iron Man. Nobody else on the Jazz roster has quite the same Tony Stark-ian swagger as Burks, and his multifaceted game mirrors the maneuverability and weaponry of the various suits Stark has designed. Just as Iron Man used a period in captivity to hone his inventive abilities, so will Burks have the opportunity this season to free himself from The Corbandarin's clutches and take a starring role.

The kicker? Tony and Alec are both consummate ladies' men. 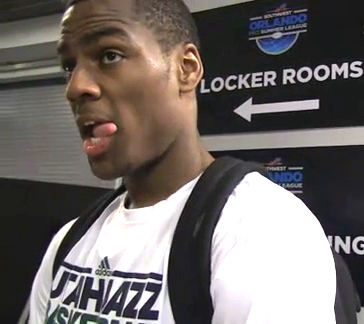 Derrick Favors is The Incredible Hulk. Quiet and emotionally withdrawn by nature, Bruce Banner transforms into the Hulk when he unleashes his anger. Likewise, Favors maintains a mild-mannered nature, punctuated by bursts of sheer physical destruction. Witness:

Of course, this immense power comes with danger, too. Banner can easily lose control of the Hulk and cause damage to people and places he loves. Favors can lose control of his defensive game, causing foul trouble for his team. But with the friendship of Captain Amerihayward, Favors can be a force of nature.

Enes Kanter is Thor. Though the son of Odin was born the Crown Prince of Asgard, he had to prove his worthiness to rule, changing his arrogant and somewhat irresponsible attitude. Kanter was forced to sit on the sidelines at Kentucky, deemed unworthy ineligible to rule play. But like Thor, Enes has since left his immature ways behind (at least, if his Twitter is any indication) and is ready to succeed the former king starter Al Jefferson.

Both Thor and Enes are foreigners that have grown accustomed to the ways of strange new lands. Both are prime physical specimens. And both have undeniable gifts when it comes to women.

Trey Burke is Wolverine. In the comics, Wolverine was a late addition to the Avengers team. (Or a founder of the New Avengers, technically. Although they considered themselves the real Avengers at the time. You know what, never mind, comics are confusing.) So, too, is Trey Burke coming to an already established young Jazz team. But like Wolverine, Trey's ferocity, attitude and killer instinct cannot be denied.

Both Burke and Wolverine are shorter in stature than their peers. But they've let that disrespect fuel their desire to destroy their opponents. Both men go by pseudonyms: Trey's real first name is Alfonso, while Wolverine/"Logan" was originally named James Howlett.

And with all the national awards Burke won at Michigan as a Wolverine (I KNOW RIGHT IT'S PERFECT), there's no doubt that he's the best at what he does. But if you're an enemy...what he does isn't very nice.

Feel free to agree, disagree, and/or make other roster comparisons in the comments below.