Utah Jazz Roster 2013: Where is your home sweet home?

Share All sharing options for: Utah Jazz Roster 2013: Where is your home sweet home?

The 2013-14 Utah Jazz will play 41 (at least) games at the EnergySolutions Arena in Salt Late City, Utah this year. The squad will not be homeless during the season. But very few guys make their full-season home in Utah. We don't really need to be worried about this though, where you file (or don't file in the case of our coaching staff) your taxes doesn't mean you are any more or less loyal to the franchise. Sure, it's a nice sign when a player buys a big house and lives in the #801 all year long -- but we Jazz fans shouldn't be threatened if a guy does not. After all, many players today look at this as a job, and they are professionals. If we win it'll be easier to plant roots here. But until we become a 'destination' franchise I don't think you need to worry about players renting for their first year here. (After all, what would DeMarre Carroll have to do now if he spent bank on a big place, and we didn't even offer him a free agent contract?)

It's nice to know where a player lives, but for me I take great interest in where a player has come from. They're all going to be here for the season. I could care less what they do during the off-season. (Maybe I'm a little jaded because I've lived in so many different countries and haven't been any less loyal to where I was working because my 'home' was far away...)

So let's look at where these guys are from (where they are born) on the map. Because, well, it would be dumb not to (with the geography) I've also included some guys who aren't on the team right now -- but in a perfect world should be. 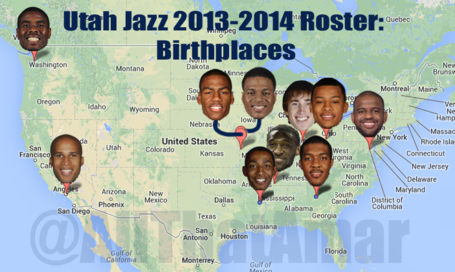 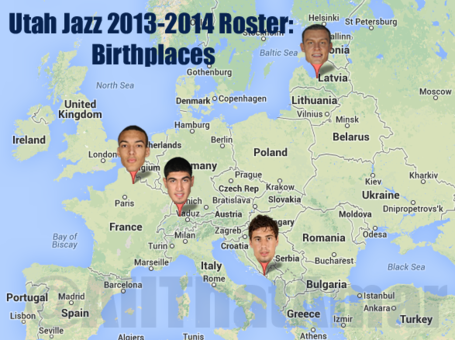 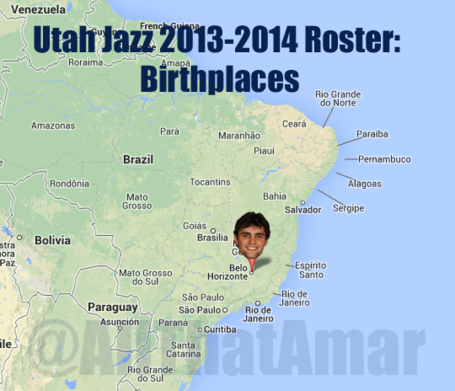 Yeep. Raul Neto and Ante Tomic aren't on the team right now, but whatever. This is better

Except for Tomic and Neto, for the 13 other dudes their address for the next season will be Salt Lake City, Utah. They may have other homes, but they're all professionals. And I expect them all to be professionals this year as we win some games.