The Downbeat #1142: The Rudy The Vampire Slayer Edition

Share All sharing options for: The Downbeat #1142: The Rudy The Vampire Slayer Edition

So, I skipped my Downbeat slot last week while I was on vacation. I missed you guys. Glad to be back.

Diana gave you a great Downbeat late last night, and I don't want to overshadow her work by stealing the top Downbeat slot so quickly, so make sure you go read her post before continuing here.

One item in Diana's Downbeat summarizes the latest in the Adventures Of Enes Kanter On Twitter -- Moni covers the events on her blog as well -- so I won't rehash that here. Instead, I'll point you to a hilarious mini-exchange between Ian Clark and Rudy Gobert:

You guys. I would SO watch a "Rudy The Vampire Slayer" TV show. I'm just saying.

These are a bit old, but I don't think we've featured them here yet. A Reddit user composed these pixel-art posters featuring the current starters of every NBA team. Here's the most updated version: 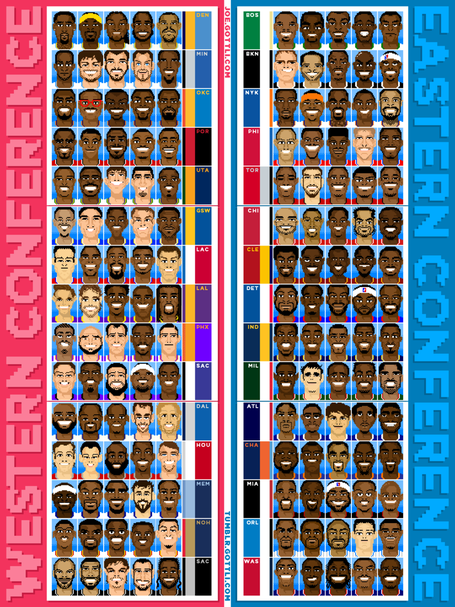 He really nailed Enes. Not sure how I feel about Gordon. Dem nostrils. Also, it looks like he's assuming Marvin Williams will start. Which, no. But good job, good effort.

FanPost time! I have a lot of them to catch up on, but here's a few that caught my eye.

First, jazzyman explores the idea that the Jazz may be a bottom-five team in the NBA this season:

Is this team really going to be that bad? Personally, my W prediction remains at 28 games. (That would be about where Sacramento, New Orleans, and Washington were.) I think our best comparison would be the Hornets Pelicans of last year. We look to have a few good starters with an average bench that just doesn't end up winning that many games in a competitive Western Conference.

(Jazzy also let us know that he's off on his Mormon mission now. He won't see this for a while, but thanks for contributing, Jazzy!)

Next, SKMike gives us a brief update on Jazz draftee Ante Tomic's play for Croatia in the FIBA Championships:

Tomic played 21 minutes against Spain, scoring only 3 points on 1/4 FG's and 1/2 FT's. He added 5 rebounds and 1 assist. Against Georgia in 21 minutes he scored 7 points on 2/4 FG's and 3/4 FT's. Only 2 rebounds but an amazing 7 assists. He also scored the game winning layup with 9 seconds left and Croatia down by 1. Earlier he hit 2 clutch FT's with 38 seconds left to give them a 2 point lead.

Finally, thatdoolinkid posits that good NBA teams only have an eight- or nine-man rotation, and he suggests who those players should be for the Jazz:

We've been throwing lineups and minutes around for a long time now this summer. However, many of us have failed to realize that we're trying to get playing time for the C4, 3 rookies, Rush, Marvin, Evans, JL3, and still finding out if Beans has anything left in the tank. Add Jerel McNeal likely rejoining and we have a 13 man rotation. Sadly, this will never pass. A good team plays only 8 or 9 guys. This post outlines who I think should fit that 8 or 9 guys.

Thanks to everyone who writes these great posts! I'm really looking forward to the start of the season, when we have real news to talk about. I can't wait to see what y'all come up with.

It's not Jazz-related, precisely, but Brad Rock of the Deseret News wrote a great posthumous profile of former Utah Stars great Zelmo Beaty. He may not have been a Jazzman, but you've gotta love this description of Beaty's low-post game:

In the early 1970s, downtown Salt Lake was a rough place to be — downtown meaning the paint. That’s where Zelmo Beaty set up shop. The former Utah Stars center considered it his property, on both ends of the court.

A good rule of thumb: Crowd him at your own risk.

"If you started to encroach into some of his territory in the paint — which he considered all his territory — you might get an elbow," former Dallas Chaparrals and Utah Stars coach Tom Nissalke said.

I love the basketball history we have in Utah, from the Stars and the great college teams of the past to the current Jazz roster. Hoops are a part of our heritage.

It covers a few of Stock's career highlights, includes a couple of money quotes from Jerry Sloan and Bryon Russell, and focuses on the 1999 first-round playoff series with the Sacramento Kings, where Stockton pretty much put the Jazz on his then-37-year-old back.

The one thing the video doesn't cover: the last moment of Stockton's playing career, again versus the Kings in 2003, this time in a losing effort. See below.

I tried not to tear up. I failed.

We still love you, John.