For whom does the bell toll in November?

Tyrone Corbin began his journey as a head coach on a Thursday, the day before Friday, February 10, 2011.  It wasn't the normal pomp and ceremony most head coaches receive.  Tyrone Corbin was handed the keys and driver's seat to the Utah Jazz franchise much as a spouse receives the responsibility of the family after an untimely death in the family.  Jerry Sloan had retired on a Thursday, the very same Thursday in which Tyrone Corbin was hired as head coach.  Thus, newly named Coach Corbin started his new path as a head coach while the entire Utah Jazz organization and fan base mourned the retirement of legend and Hall of Famer.  As Tyrone Corbin would face time and time again, he might have been the right guy at the wrong time.  On Thursday, February 20, 2011, the Utah Jazz organization didn't need a permanent replacement at head coach.  They needed a wake. 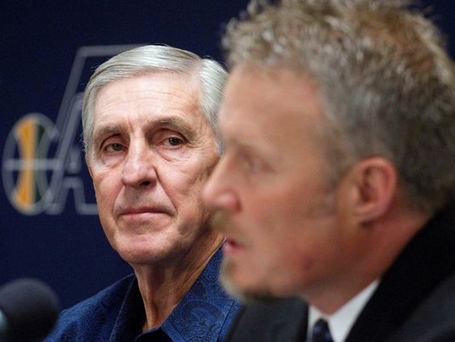 On Thursday, February 20, 2011, the Utah Jazz organization didn't need a permanent replacement at head coach.  They needed a wake.

The Utah Jazz faced off against Phoenix at home.  The game was aired nationally on ESPN.  Tyrone Corbin's first loss also occured on a Friday.  The Jazz lost that game 95-83.  That game was known more for what happened behind the scenes than what occurred on the court.  The Jazz got off to a healthy lead in the 1st quarter then they played without energy in the 2nd half, most likely due to the emotions of the past 48 hours getting to them.

Karl Malone, who was officially announced as a development coach for the Jazz in 2013 on a Wednesday, was in attendance at that game.  He infamously got into a spat with Greg Miller and was quoted as saying, "Coach don't quit nothing."  This was Tyrone Corbin's honeymoon period, not easy for a coach replacing a legend.

The Jazz would end that season on a Wednesday against Denver.  They would win a game that night without consequence.  The season would end with the Jazz going 39-43, missing the playoffs.  Deron Williams was traded sometime during that season, but this is not about Deron Williams.  It is about Tyrone Corbin.  Though, it would be oversight to fail to mention one other significant hire after Jerry Sloan's sudden retirement.

"I am excited to have Jeff on board and to have him expand his role and become more involved with the team," said Tyrone Corbin then in 2011.  "He has a great history with basketball, especially with the Jazz, and I think the players are excited about him being more.  I think he will bring a lot of positive energy and knowledge to the team."

It would be then that Jeff Hornacek and Tyrone Corbin would be linked together.  The Jazz journeyman paired with the Jazz legend.  The journeyman whose career was amplified in the flex offense while the Jazz legend amplified the flex offense with what Stockton would later account in his autobiography as a "godsend".  Hornacek's valuable knowledge of the game would turn those Stockton-Malone era teams from consistently good to consistently great.

For the next two years together after the 2010-2011 mini tenure, Tyrone Corbin and Jeff Hornacek began to personify the two identities on the team.  Tyrone Corbin would identify with the veterans as quotes like this from Matt Harpring would make the rounds, "PK talked to Ty Corbin, and Ty was talking about how during his career, it bugged him that every time he went to camp, it seemed like every other year there was always some new hotshot, who hadn't proven anything, who was in front of him in the pecking order.  And now, Ty plays veterans over young guys.  I don't think that's an accident.  That's his story.  That's who he is."

Raja Bell, Randy Foye, Earl Watson, Marvin Williams, and Josh Howard are just some of the names Alec Burks and Gordon Hayward have had to fight for minutes with at the two and three spot.  Enes Kanter and Derrick Favors have had to fight for minutes behind Francisco Elson, Al Jefferson, Paul Millsap, and Jeremy Evans.  While the mountain for Enes Kanter and Derrick Favors has been a higher climb due to talent the bar has been harder to reach for young players.

Harpring would later say as an addendum to his prior comments, "As you get older, you gotta let things go, 'cause otherwise you will stay in the past and run through the mud the rest of your life.  So in order to get better, you gotta kind of learn from the past and move on.  And it's one thing to let it drive you and motivate you, but it's another thing to keep revisiting it and let you back down."

Jeff Hornacek would identify with the young players.

"He's a great mentor to me," Alec Burks said back in 2012. "He helps me every day, working on my shot, working on spots to get to, on angles, and all that.  He's teaching me and has been a big help."

"Having a great shooter like that work with me helped me a lot, not just with mechanics, but with my confidence, "said Gordon Hayward."

Hornacek would regularly remind Derrick Favors of how to perform certain moves or where to pick his spots because that's how he remembers Karl Malone doing it.  Favors would trust him.

Then after the disappointing 2012-2013 Utah Jazz season where the Utah Jazz narrowly missed a playoff spot, things changed.  The Utah Jazz let all their expiring veteran free agents walk in free agency, all of them.  The new GM in town, Dennis Lindsey, was ushering in a new change.  Out with the old, in with the new.  No doubt to someone like Tyrone Corbin this was an issue that probably plucked his heartstrings.  Being a  journeyman veteran and being at the head of a youth movement was most likely one of the hardest coaching moments of his career.  He had to push past his personal biases and buy into the new front office vision, whether he liked it or not.  Luckily he would have a strong development coach by his side, Jeff Hornacek, but like Tyrone's playing career his teammates and surroundings would change yet again.

"Jeff got rave reviews with his on the court work with players in Utah." - Ryan McDonough, current Phoenix Suns GM

On a Monday, just like a Monday two and a half seasons ago, Jeff Hornacek was hired as a coach, a head coach.  He was brought on as the new coach of the Phoenix Suns.  Jeff Hornacek would inherit a young team at the beginning of its rebuilding stage leaving Tyrone Corbin and his coaching staff as they begin the same journey of rebuilding in Utah.

New Suns General Manger Ryan McDonough said, "Another thing that we were really looking for, was a big-time development guy, who could make our players better, both those players that we have on our roster now and the players that we're going to bring in the future.   Jeff got rave reviews with his on the court work with players in Utah."

Tyrone Corbin and Jeff Hornacek are linked by this new future, both head coaches of rebuilding teams and both were at one time employed by the Utah Jazz and under the tutelage of Jerry Sloan.  Their paths will cross on the second game of the season.  A Friday.  The same day of the week Tyrone Corbin played his first game and against the same team, the Phoenix Suns.

In a way, Jeff Hornacek will be in the same situation he was as an assistant head coach at that meeting.  Depending on his and his team's performance he will determine how Tyrone Corbin is received in Utah during the 2013-2014 season.  Three dates, Friday November 1st, 2013, Friday November 29th, 2013, and Saturday November 30th, 2013, could change Tyrone Corbin's entire tenure in Utah for the better or for the worse.

Fast forward to Friday November 29th.  Jeff Hornacek will be making his return to Utah.  This time as the opposition's head coach.  He could be making his return already 1-0 against his former boss.  On Friday November 29th, the same day of the week that two former teammates already have matched their teams against one another just a month prior, the Utah Jazz and Phoenix Suns will face off again.  This time in front of Jeff Hornacek's biggest fans.  The same fans that see Jeff Hornacek as the third member of the holy Utah Jazz player trinity which includes Karl Malone and John Stockton.

Jeff Hornacek, on a Friday, has the opportunity to show he is the coach Utah missed out on.  Hornacek can demonstrate how he has taken a young roster and begun to mold them into what they can be.

Tyrone Corbin, on a Friday, will have the opportunity to show why he was a head coach before Jeff Hornacek.  He can demonstrate why he was chosen to retain his position as head coach of the Utah Jazz for the 2013-2014 NBA season.

Then as if that game was not enough Tyrone Corbin and the Utah Jazz will fly to Phoenix on a Friday night to play the Suns on a Saturday November 30th in what could be the knock out blow to Tyrone's reputation in Utah.

Two Fridays and a Saturday.

Those three days could sway public opinion of Tyrone Corbin's tenure in Utah.  Fair or not, when facing off against a past Utah Jazz legend who could have been their current head coach, this is the reality.

For two teams that will most likely not be in contention for much of the NBA season the series between the Utah Jazz and the Phoenix Suns could determine whether Tyrone Corbin is the head coach of the Utah Jazz at the end of next season.  If Jeff Hornacek's young team comes out triumphant on two Fridays and a Saturday in that first month of the NBA season then the Utah Jazz franchise will have egg on their face for allowing an up and coming development coach out of their grasp and for putting all their chips on Tyrone Corbin.

If Jeff Hornacek loses this series it will have little bearing on future success as a head coach.  On the other hand, Tyrone Corbin has a lot to lose, public support, front office confidence, and player respect.  For Tyrone Corbin to garner the respect and trust of the young Utah Jazz he must show them that he was more prepared than his understudy, Jeff Hornacek, on two Fridays and a Saturday.