NBA Preview 2013: Which player should the Utah Jazz "bring back"? There is only one obvious answer: Kyrylo Fesenko

Share All sharing options for: NBA Preview 2013: Which player should the Utah Jazz "bring back"? There is only one obvious answer: Kyrylo Fesenko

Right now the Utah Jazz roster looks pretty great. The team looks like there will be solid competition for playing time in the front court between Derrick Favors, Enes Kanter, Rudy Gobert, Andris Biedrins, Jeremy Evans, and when he returns to full contact drills, Marvin Williams (stretch four out of necessity). And the wings all seem to be at a similar level of desperation between Gordon Hayward, Brandon Rush, Alec Burks, Richard Jefferson, Marvin Williams, and Ian Clark. (Desperation for "I want to play", not that they are desperate in general, this may be a "ser y estar" type of exercise...) As for the point guards, well, we have that on lockdown because Trey Burke is going to making a lot of believers this season. I'm okay with that.

The team is pretty solid for the over-stated goals of the 2013-14 season. (No, one of the goals isn't to get Tyrone Corbin fired, that's just mean. Dennis Lindsey would never set him up as the fall guy.) But what does this team need?

Well, looking at the types of players the Jazz have lost over the years it's hard not to make very valid arguments for a Deron Williams (an actual star who can score 20 ppg), Kyle Korver (a marksman sniper from deep who is a great community guy as well), Andrei Kirilenko (the Soviet Army Knife that can do it all), or Paul Millsap (Whyyyyyy can't you either play the three or come off the bench?) re-unification. Some of my brothers at the other SB Nation NBA blogs may talk about bringing back a retired player or personality. Sure, that's all well and good. Okay, if we're playing by those rules can we have Larry H. Miller back from the dead? And John and Karl back in uniform?

Do you know who the Jazz need that is available right now?

Okay, besides Miss Utah, who did not win the Miss America pageant. 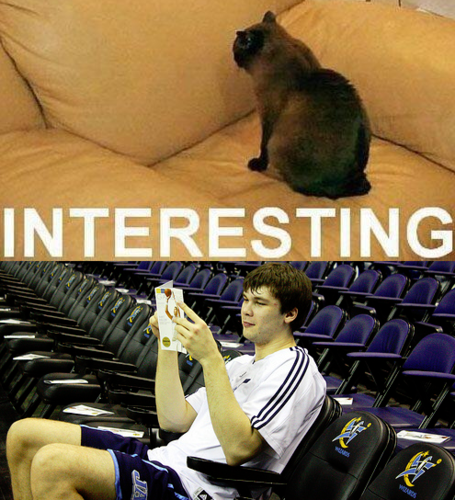 Kanter, Gobert, and Fesenko would be (beyond a reason for a PR rep to go into early retirement) a dream come true for fans. And this season, a season where we may not get as many wins as we hope for, or any national recognition, SHOULD be for us fans. (We paid money to watch Josh Howard start in the playoffs!)

Fesenko is a legend . . . in Utah. Right now he signed on to play with BC Donetsk, who play in an arena that seats less than 5k people. The former Cherkaski Monkeys bigman shouldn't have to slum it down in the Donetsk team. Not when he deserves to have another NBA contract (beyond the one he had with the Indiana Pacers . . . and the training camp contract he got to play with the Chicago Bulls).

In The Ukraine he's just another really tall guy. In The Utah? He is a celebrity. And in The Utah Jazz team? We can always use a 300 pound guy who blocks 0.4 shots a game. (142 career games in a Jazz uniform) Okay, maybe he won't get to see much of the floor now that Favors and Kanter are in town, but he could be a proverbial 'scared straight' warning to Gobert. Maybe they'll be friends, and it could be beneficial . . . Fes can help Rudy gain some weight, and Rudy can . . . uh . . . teach Fes how to make free throws? (In those 142 games Fes has gone to the line, and made only 38.9 ft% -- he's more than 10% better from the field when there are defenders around)

He'd also get along great with Andris, just as long as Biedrins doesn't get tired of the big Ukrainian guy clowning on Latvia and their foggy 71 degree summers.

Fesenko isn't just a joke machine, he's actually a legit rim protector (changes shots, doesn't block them -- result is the same, the other dude misses) who looks ridiculously useful in things like Synergy and advanced stats. While he does average 7.1 fouls per 36 minutes, he's never going to need to play 36 minutes on the 2013-14 Utah Jazz. Of course, he would also average 8.5 rpg and 1.6 bpg in that same time -- so for the fundamentally sound things you'd want your center to do, we'd have the most efficient 3rd (or worse) string center in the league. It would be nice to pop him in there to take the edge off some of the 'fancier' players the NBA sends at us though.

Of course, the main benefit would be for the fans.

We just love this guy.

When I was at the NBA Draft Combine, Mychal and I got a chance to talk with Stu Lash and Jason Levien -- specifically about Fes. Big Fes wants to return to the NBA. I think the Jazz would get a lot more milage from a cheap Fesenko signing than an Alex Ajinca one. Ajinca is French, about the same size, more experienced (the curse of the vettzzz), but he's never had a viral video from an interview before.

Bring back Kyrylo Fesenko. Fans will show up to games. He doesn't have to play. Just let him hang out with Kanter and Gobert and film it. We're talking about UVs here. Also, for us people who write about the Jazz everyday -- Fesenko really makes it easy to post content during the slow periods of the year. (Three radio stations and two newspapers got a whole weeks worth of content just from him dying his hair. Don't pretend that this didn't happen. It did. The Off-season is that boring without Fesenko. Or Enes Kanter tweeting like crazy. This never happened.)

We all know the Jazz aren't going to bring Fes back. And that there is no real, on the court, need. But as a fan . . . or as a fan/writer . . . Fesenko would be who I would bring back. (And then #FesenkoFridays) Or like, uh, maybe Raul Neto. (OOoooohh, #TooSoon)