Burke and Burks are working out with John Stockton. Ty comments on current NBA coaches. Some BYU-Utah fun in the Jazz FO.

Share All sharing options for: The Downbeat #1149: The Its for Sure Edition!

HUGE NEWS that was speculated upon a few nights ago on twitter and confirmed Wednesday by Mr. Randy Rigby on 1280.

Here is what Randy had to say about it via Moni's fabulous blog at Jazzfanatical.wordpress.com

I think Trey sent out a little tweet, and Alec [Burks] and Trey are both actually working with John. They were gonna try to go up last week, and things didn't work out. One of ‘em had some health problems, some flu, and they were able to get up there this way, this week, and work with John.

Few words can describe how excited I am that the Jazz sent both Burke and Burks to work with John Stockton. Since reading John's book I have wanted John to be a part of our team a million times more than I did before reading his book (and I wanted it really bad). John is so intelligent and his basketball knowledge is off the charts. John is not only intelligent but he is a creative thinker. John doesn't think in the same way that most people think. I can't really put into words what i mean by this but you know how highly successful people have a different way of looking at things and life in general, thats the impression I got about John when reading his book.

Here is what Yucca had to say about the news: 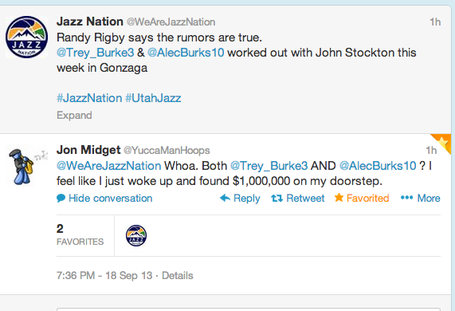 John did great things for Deron's game, I am excited to see what he can do for Burke and Burks. Also it excites me what it means that the Jazz deemed Burks and Burke important enough to the team to send them up to work with John!

Randy talked a little more about the greatness of John by sharing what Neto's father thinks of John Stockton who happens to be his favorite basketball player ever. Check out Moni's transcript to see what was said.

Many of you know David Smith (Jazz superfan writer) . Yesterday he wrote an article for Salt City Hoops about who is on the Jazz's radar for training camp. TBH I am grateful for people like David. I really pay no attention to training camp invites, summer league invites, you know players that may or may not make the team. It really is interesting though when others do the research like David ALWAYS does.

I loved this last paragraph by David:

Lindsey has shown a desire to leave no stone unturned. With the mini camp the Jazz ran earlier in the summer, along with summer league and this "open gym" time, Utah is doing its best to discover talent, both for now and perhaps for the future. There may be other names the crop up over the next week. With Utah Jazz media day slated for September 30, the season is fast-approaching. Perhaps some of these guys will be given their chance come training camp.

Once again we are reminded in what good hands the Jazz are in, so happy to have Dennis Lindsey!

NBA.com writer Steve Aschburner wrote an article about all the new coaches in the NBA. 26 out of the 30 coaches have only been with their current teams since Oct 2010. that is A LOT of turnover. He asks different coaches for their philosophies and also asked current coaches some of their thoughts on new coaches.

Here is what Ty had to say about new coaches:

Tyrone Corbin, Utah Jazz: "You look at guys like Jeff [Hornacek] and Jason Kidd, Brian Shaw, guys who have played the game, they've been around championships or had the experiences with great teammates. They understand it. The pressure of stepping up and coaching a team won't be as great as maybe it was in the past [for those without that playing background]."

Sorry but doesn't that remind you a little of this:

Tyrone Corbin, Utah Jazz: "You look at guys like Jeff [Hornacek] and Jason Kidd, Brian Shaw, guys who have played the game, they've been around championships or had the experiences with great teammates. They understand it. The pressure of stepping up and coaching a team won’t be as great as maybe it was in the past [for those without that playing background]."

Thibs had this nice thing to say about the Jazz:

"A big part of coaching is building, the progression. When you look at the model franchises — San Antonio, Utah, Miami, Boston — that’s how you build. It’s a team sport so you'd like to have continuity. But with other changes — a new owner, a general manager — usually more change follows.

"It’s easy to say you're going to have patience. But you actually have to have it when you start something over. You can’t keep changing every year, even just changing your bench. To build a good team concept, you'd like to have a core coming back year after year."

We haven't heard about us being a model franchise in awhile. Of course he meant consistency with Sloan but still :)

The article also has good quotes from Jeff Hornacek and his coaching philosophy so check it out!

In case anyone was wondering Gordon Hayward has a new girlfriend (or so we think) BBJ found this on Haywards IG: 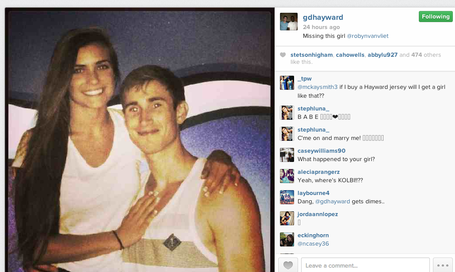 Here is what BBJ and others had to say in this hilarious twitter exchange! 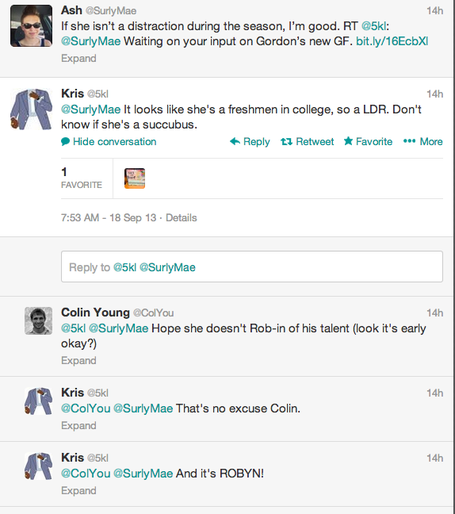 Last but not least Randy Rigby shared some hijinx that are going on in the Jazz's FO thanks to the big Utah- BYU game this Saturday! (Thanks Moni for the info)

There’s some very good, you know, jabbing going on in the front office, of, you know, [Miller Sports Properties COO] Jim Olson is as red as they bleed. And so, you know, he's, I think he’s, this whole week, I know he’s been working on shaving his chest, and he's gone out and bought some red paint. So he's gonna be, I think, decked out. But then we've got a number of people, I know our new chief revenue officer, Don Stirling, is a BYU man. And so, he's competing against him, and I'm worried there's talk of, you know, he may be shaving his head with a "Y" in the back of it.

Good times, good times. If you want info on the backgrounds of Jim Olson and Don Stirling read this.

Enes Kanter is Snow White. Jerry Sloan as Doc and you guessed it Ty Corbin as the Wicked Stepmother.