The Downbeat #1155: The Roster Editon

Your Thursday morning Downbeat! Read about the roster, Trey Burke and more!

Share All sharing options for: The Downbeat #1155: The Roster Editon 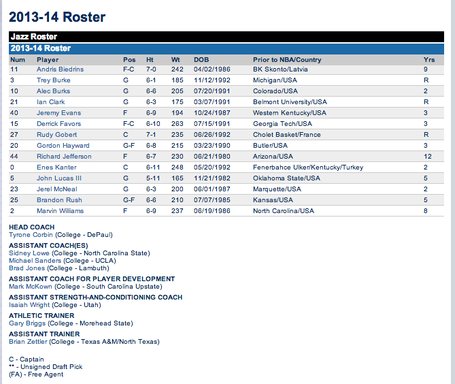 So there's all your jersey number needs, your years in the league needs, college attended needs, etc! I know we are all anxious to get our #44 Jefferson jerseys ;)

I didn't know who Isaiah Wright (the assistant strength and conditioning coach) was so I looked him and found this:

Its an interesting press release. It talks about David Fredman and Richard Smith's promotions within the organization. Fredman and Smith are some of the longest tenured Jazz employees. Fredman holds the distinction of being the only current Jazz employee who worked both for the New Orleans Jazz and the Utah Jazz.

The Jazz also added Bart Taylor who is a San Antonio native who did internships with the San Antonio Toros and the San Antonio Spurs, in their operations department. Taylor was hired as the coordinator of scouting. Interesting tidbit about Taylor is he graduated in mathematics from Trinity where he also played basketball for three years.

Burke had a great interview in Hoopsworld. Some highlights are:

"I definitely think [I can be a franchise player]," Burke said. "It’s been my dream all my life, not just to get to the NBA, but make an impact in the NBA and be a strong name. Growing up, I watched Allen Iverson. Recently, I went out to Spokane to work out with John Stockton. Last year, I went to Chris Paul’s camp and got to pick his brain a little bit. I’ve studied these smaller guys like myself and I want to have a similar impact on the game. I definitely think it’s a good opportunity to come out here to the Utah Jazz and have the keys in my hands from day one."

"I've always played with a chip on my shoulder my whole life and people have doubted me since I’ve picked up a basketball, so it’s nothing new to me," Burke said. "It definitely motivates me to go out there and work harder than the next man and continue to get better. I think it definitely gives me a chip on my shoulder and it helps me win games. That’s the number one thing, if you can go out there and help your team win, which is something I’ve done my whole life, then you'll be fine."

"I’m really looking forward to competing in the playoffs, and I want it to be this year," Burke said. "I’m going to compete and fight, so is everybody else on our team. We’re all going to compete and fight. It should be a fun year and that’s one of our goals. Our number one goal is to make the playoffs and go from there. Hopefully we can come together and do so. I’m looking forward to it."

Burke, he also admits that he'd love to bring home Rookie of the Year honors. Burke believes he be a difference maker for the Jazz, and take home the award.

Winning, playoffs, learning from former and current greats. I like those qualities in a player. Lets hope he can bring that winning attitude to our traditionally winning franchise and get this thing started already!

Amar posted yesterday that Jerel McNeal was released by the Jazz. Here is some twitter chatter about possible reasons why: 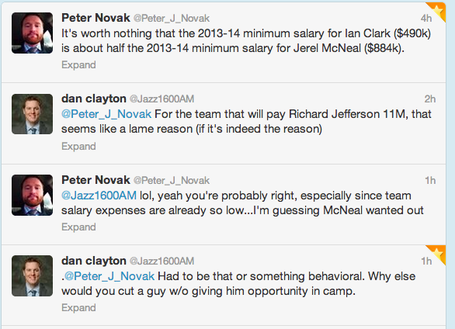 And a little more:

Interesting stuff. I don't believe the Jazz to be boorish and fatuous and have McNeal stay with the team all summer and then release him right before camp for no reason. Maybe it was McNeal's agent like Steve Luhm thinks, maybe it was a money issue. It seems like releasing him days before training camp begins benefits McNeal more than the Jazz so that hopefully he can catch on with another team.

A Bulls insider from the website CSN Chicago (a Yahoo site) gave their predictions for the 2013-2014 NBA season. They of course picked the Jazz to come in dead last of the Northwest Division

5. Utah Jazz: There was no ambiguity from the Jazz, as far as what direction the organization is going, as veteran stars Al Jefferson and Paul Millsap were allowed to depart via free agency, meaning Utah will build around its young core moving forward. The big-man combination of power forward Derrick Favors and center Enes Kanter will get every opportunity to blossom, while swingman Gordon Hayward should emerge as the team’s go-to player and guard Alec Burks will have a chance to receive consistent minutes. Rookie Trey Burke is clearly the team’s point guard of the future, but veteran John Lucas III was acquired to be a safety net as the team goes through some growing pains.

Thoughts? I guess it says everything we already know but you know it's September so something has to feel these db spots!

Did you know that soon you'll be able to bid on Michael Jordan's flu- game shoes?! (H//T @chang_max)

I know we as Jazz fans really have fond memories of that game so who wouldn't want those shoes?

"We were approached by the ball boy because of our affiliation with the Basketball Hall of Fame," Russek told BDL. "He never looked to sell them before now. I think he recently realized that he was getting a little older and was more curious than anything to see if people still cared about the story."

Russek and Grey Flannel are betting that prospective bidders will care quite a bit, which is why they pursued the shoes for consignment and inclusion in their Dec. 11 holiday auction catalog. Bidding will open on Nov. 18, if you're a deep-pocketed Jordan lover who'd like to lock this in on your calendar; the autographed shoes will be "accompanied by a letter from the ball boy as well as an incredible photo of Jordan signing these and handing them over post game," according to Russek.

What would you do with these shoes if you had them? (Get creative!)