The Jazz are Great Edition: The Downbeat #1137

Gobert, the Pre-Season and Stockton

Share All sharing options for: The Jazz are Great Edition: The Downbeat #1137

Sometimes when you haven't been writing a downbeat for months its hard to get back into the rhythm of writing one, its especially hard on a week that has a holiday Monday so you've been off all week anyways and totally forgot its already Thursday!

Basketball John came across this pic of the screen. I thought it was awesome. Even though we've seen mockups its something to see the actual frames. IT IS HUGE!!! 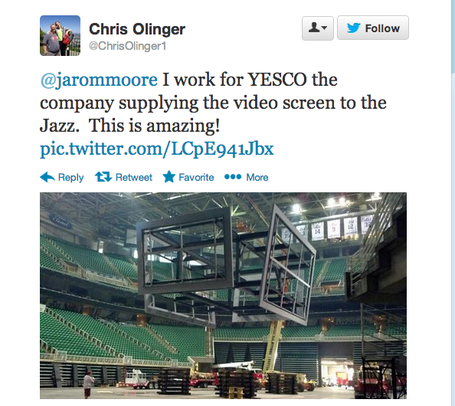 Shout out to Chris Olinger if you read SLC Dunk!!!

I am happy that the Jazz are giving the fans a better in-game experience. It was quite embarrassing to me that BYU had a better screen than the Jazz. I mean seriously a college doing it better than a pro-team. When I worked for BYU and went to every basketball and football game it was so hard to go to Jazz games the same seasons and look at that dinosaur of a jumbotron that the Jazz used to have. It was seriously to me a distraction during the game especially if you were in the upperbowl. A new jumbotron, a new GM, a new starting lineup, things are looking up for the Jazz!!

Pre-Season tickets to the Boise game are on sale now. Buy them here. Come up to Boise we'll tweet it up! 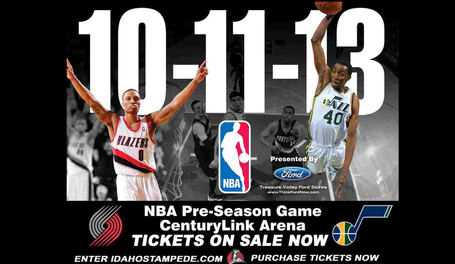 Pre-Season tickets for the games in Utah go on sale tomorrow!

If you live in Salt Lake or are willing to drive from where you are at to downtown Salt Lake, today is your lucky day. You have the opportunity to meet Rudy Gobert, Dennis Lindsey, Randy Rigby, Smitty, the Bear and Bumble! Plus besides meeting those awesome people you can donate to the Utah Food Bank. 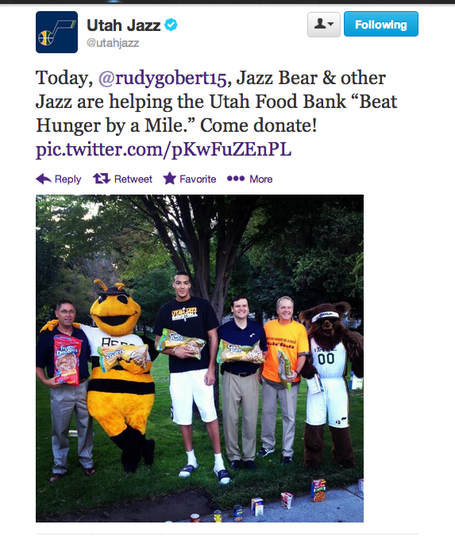 Here is the info on how you can help

Please go donate if you are in the area. Love that the Jazz helps the community like this.

Zach Lowe is at it again. Zach wrote a great piece on the art of the Salary Dump.

Using the Caron Butler trade as an example. Lowe explains the salary dump and its complications. Caron was shipped from LA to Phoenix just two months ago and now he is on his way to the Bucks. Phoenix obtained guard Ish Smith and center Viacheslav Kravtsov for Butler. In the article Lowe explains why Phoenix got so little.

1. Butlers decline as a player.

4. Phoenix's desire to not take on long-term contracts. He shares how this applied to Utah also with Jefferson and Millsap:

No one is in a hurry to exchange intrigue for Butler, it appears. Another type of deal would send a less exciting long-term salary and an asset to the Suns — something like Chuck Hayes and a second-round pick, or Brandon Bass along with some future asset from Boston. But those teams don’t appear to see Butler as appealing enough to part with a prime-age rotation player and an asset, and the Suns want to keep the salary slate as clean as possible.

We’ve seen the same trends in Utah, among other places. People beat the Jazz up over failing to unload Al Jefferson and Paul Millsap at the trade deadline, and the Jazz clearly missed chances to get at least something for each of those guys — in part because they liked the idea of making the postseason in both 2011-12 (when they made it) and last season (when they missed). But by the time the most recent trade deadline came around, with the Millsap and Jefferson deals both expiring, Utah found itself unable to land any offer that wouldn’t have come with a long-term salary the Jazz didn’t want.

So we all know it and said it a million times, Utah could have unloaded sooner but were desperately trying to make a playoff push and then it was too late.
But its okay because the 2012 playoffs were really meaningful to the franchise and helped develop the Core Four and Burke ;) This is all tongue and cheek of course. I always want my team to win but does seem like long term success was lost for short term gain. I am excited that Dennis Lindsey is focused on the now and the future now instead of just meaningless #playoffpushes. Its funny because in 2012 I really really wanted the Jazz to make the playoffs, I said from the beginning of the year I think they could. Now I wish that time was spent building chemistry and developing our young players. Oh well.
Anyways go read the rest of Lowes article its really interesting.

Moni recently wrote a post about John Stockton's autobiography, it is great (both the book and the post). Moni shares 12 tidbits that she loves from the book. I want to share just two things this week from the book that I loved and how it can help our young team.

1) Karl Malone wrote the forward. Its sweet to read of the friendship that they had playing and that they still have today. Here is a tiny bit of the forward:

It’s neat to be able to say today, long after the smoke of fame and glory has cleared, that if he called at 2:30 in the morning and needed something, I’d say, "Where are you at? I'll be there." Anytime, anyplace. That’s how it is with John Stockton. I never, never, dreamed I could become so close with a teammate.

We are able to see that friendship from the little glimpses we get of their lives from their Utah HOF induction, to the Stockton's making that video of Karl's dunks for Karl's 50th birthday, how the families interact on twitter. Its heartwarming to see that the players are still close after 10 years of retirement. You know that John and Karl pushed in each other in part because they were such good friends.

2) John, Jerry, Phil and other players had a close relationship. They were able to talk about the games after the games. On the road they would often meet up in the bar to discuss all kinds of things including the game they just played.

Things that frustrated us about their coaching or vice versa could be unearthed in this removed and more relaxed atmosphere. The discussions were never hostile; they were open and sometimes animated. Feathers didn't get ruffled as real and important sentiments were aired. Serious issues or specific details about someone’s play were fair game.

A motivational challenge or two might be thrown out: "You won't be able to guard that guy!" or "This team won't let you get away with that!" These informal exchanges made us better players and they better coaches. We could see each other’s perspective. I'm nostalgic about those evenings as they remain on my highlight reel.

I have read these paragraphs a lot since I have had the book. When I read it I didn't find it surprising at all. When you listen to these men talk about eachother you only hear respect and admiration for each other.

My hope is that our young players and coaching staff can respect each other and the game enough to develop this kind of relationship and grow together as a team.

All quotes taken from the uncorrected proof of "Assisted" by John Stockton The final published copy may change without notice.